There’s a scene 30 minutes into “The Intouchables,” the second-highest-grossing film in French history (after “Bienvenue chez les Ch'tis”), in which a family friend of French aristocrat and paraplegic, Philippe (Francois Cluzet), warns him about his new North African caretaker, Driss (Omar Sy).

By this point in the movie we’ve seen Driss: 1) barge into the job interview for the caretaker position by pretending to be someone else; 2) proposition Philippe’s red-headed assistant, Magalie (Audrey Fleurot) at the job interview; 3) steal a Faberge egg from same; 4) still get the job; 5) object to the most basic elements of the job, such as fitting Philippe with support hose; 6) pour boiling water on Philippe’s legs because he has trouble comprehending that Philippe feels nothing below the neck; 7) poke Philippe in the eye with a forkful of food because he’s watching Magalie’s ass; 8) refuse to give Philippe chocolates (M&Ms), saying “No handy, no candy”; and 9) disparage the artwork Philippe buys.

“Exactly,” Philippe responds. “And that’s what I want. No pity.”

It’s the first true moment in the movie. It’s practically the last.

Our asshole
What to make of the appeal of this film? Google “the intouchables” and “magic negro” and you get 1,200 results from critics in America, where the film 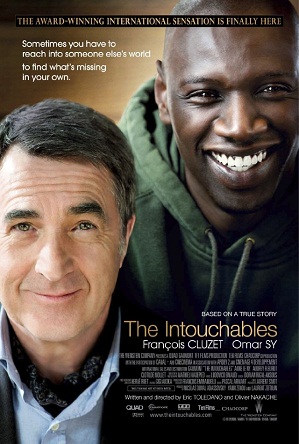 grossed $10 million. What must the French, with their tendency toward philosophizing, be saying? That Philippe is representative of modern France, a once-strong entity now reduced to wriggling its head helplessly? That the old, crippled France needs younger, more brash immigrants to revive it? That France, made immobile by centuries of crippling civilization, needs to find its brash voice again?

Who are the intouchables of the title? Both men, one assumes: the North African immigrant and the paraplegic. French society doesn’t want to touch either. They don’t know how to deal with either. If that’s the idea, we don’t get enough of it in the movie. No one stares awkwardly at Philippe. They tend to react with fear to Driss only when he physically threatens them.

Are we supposed to like Driss? He’s an asshole but the movie stacks the decks in his favor. At the job interview, the other applicants, with their degrees and knowledge and empathy, can’t answer the actorly question, “What’s your motivation?” Money, one says. The men, says another. I like crippled people, says a third. The question is never asked of Driss because we know the answer. He wanted the signature that showed he was looking for a job so he could continue to receive unemployment benefits.

There’s a jerk, a businessman, nouveau riche (you know), who parks his sports car in front of Philippe’s gated driveway, talking on his cellphone all the while, so Driss strongarms him, threatens him, to the smiles of the servant, Yvonne (Anne Le Ny) inside. Philippe’s daughter goes out with a boy with swooshy hair, who dumps her and calls her “a whore,” so Driss strongarms him, too. Demands croissant pour la famille tous le matin. The boy is dutiful. He even puts his hair in a barrette as Driss suggests. Driss may be an asshole, but he’s our asshole.

We get a bonding scene. One night Philippe wakes in a panic with labored breath, barely able to talk, and Driss put a warm compress on his face and talks him through it. He brings him outside in the night air. They stroll along the Seine. “It’s been ages since I’ve seen Paris at night,” Philippe says. Good, sad line. They talk about girls, sex. “How do you …?” Driss asks. “You adapt,” Philippe says. “You find pleasure elsewhere.” The ears, for example. Odd that he doesn’t talk about giving pleasure. He can still do that, yes? The two smoke pot. Philippe barely seems to know what it is, what it does. Assume Philippe is Cluzet’s age. That means he was born in 1955. That also means he was 18 in 1973, 21 in 1976. And he doesn’t know from pot? Please.

We wind up at Le Deux Magots at dawn and get some of Philippe’s backstory. He always liked extreme sports, he says. He liked speed. He went paragliding in heavy winds, crashed, broke his 3rd and 4th vertebrae. Et voila. At the same time his wife contracted an illness and died. “My real handicap,” he says, “is living without her.” Another nice line.

But at the moment he’s corresponding by mail with a woman named Eléonore (Dorothée Bričre), who lives in Dunkirk. He dictates purplish prose to Magalie, who sends off the letters. When Driss listens to the awful dictations, when he finds out this has been going on for six long months, he takes matters into his own hands, as he is wont to do. He snatches one of the letters off the lap of the helpless Philippe, finds Eléonore’s number, calls, puts Philippe on. Magalie does nothing. In this moment she’s as helpless as Philippe. Of course Philippe loves it. Of course this is what he wanted all along. Photos are then exchanged. (Turns out Eléonore is gorgeous.) A meeting is set up. But Philippe is nervous, too nervous, and leaves just as Eléonore is entering. We see, he doesn’t. La tragedie.

The movie keeps doing this. Driss will act the asshole, but he’s either our asshole or he’s doing something the characters wanted all along. So it’s good. We were just too uptight, see? We were paralyzed with inaction. Thank God we hired this asshole. He’s making everything right.

Buying into the bullshit
Eventually Driss’ own life, in the form of a cousin being enticed and/or harassed by a drug-dealing gang, shows up, and Driss must return to it. This doesn’t ring true, either. Driss finally has a good job, with good pay, but he’s going to leave it in order to help his family? Really? We see him and his cousin meet the hard-working family matriarch (aunt/mother, respectively) at the train station and carry her bags. I liked that scene. We see Driss talk to the gang members in their black SUV. I didn’t like that scene. Because apparently that took care of the problem. Just that.

Meanwhile, Philippe is lapsing. None of the other caretakers work out. They’re too polite, no fun, don’t get it. When Philippe asks for a massage, the caretaker brings in a dude, for God’s sake, rather than two Asian babes who will massage both men while they smoke pot, as Driss had done. And Philippe can’t ask for himself. Because while some of Philippe’s culture rubbed off on Driss, none of Driss’ matter-of-fact brashness rubbed off on Philippe. So in the end, after a bad episode, they have to call Driss back, and he takes Philippe first on a joyride, then on a carride to a seaside town, where they go to lunch. That’s where Driss abandons him. Why? Guess. Right. Eléonore. And she and Philippe meet and fall in love. And Yvonne winds up dating one of Philippe’s relatives, and Magalie’s girlfriend (ah ha!) moves in with her, and we get a final shot of the real Philippe and Driss looking out to sea—because apparently this bullshit is based on a true story—and all is right with the world.

France loved it: $166 million at the box office in 2011. (Perspective: The No. 1 box office hit in France in 2012, “Skyfall,” grossed $60 million.) It was nominated for nine Césars, including best film, best director, best original screenplay, and two nominations for best actor. It won one: best actor for Omar Sy. Over Jean Dujardin in “The Artist.”

Me, I felt trapped 10 minutes in. I felt paralyzed, helpless, forced to endure the movie’s odd form of race fantasy and wish-fulfillment fantasy. Philippe isn’t representative of the problems of modern France; the success of “The Intouchables” is. Even France buys into the bullshit.