A 70-year-old widower named Ben answers an ad for a senior intern (65+) at an internet startup in Brooklyn, charms the people he works with, calms the high-strung founder, Jules (Anne Hathaway), and empowers her in business while helping fix her marriage.

And this charming, calming influence is played by ... Robert De Niro.

Most of the movie is as improbable as most movies, but I draw the line at an avuncular De Niro. The movie really needed a Michael Caine or a Morgan Freeman; someone with a twinkle. As great an actor as De Niro is, he comes off stiff and sarcastic here. He comes off as a Know-It-All.

I get it: Casting De Niro probably helped the movie get made. But it's also why the movie never had a chance. 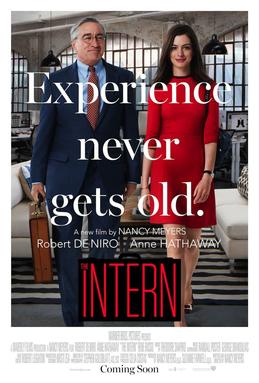 On its surface, the concept seems part of that odd, mini-trend of making uplifting comedies out of social anxieties: “Identity Thief” for identify theft; “The Internship” for career obsolescence in the digital age. Now ageism.

Except unlike those movies, where the joke is on the victim, Ben is our straight man. He needs a little help to get up and going, but mostly he dispenses needed advice to the hapless kids: about women, apartments, traffic routes, clothes, handkerchiefs. He’s never wrong and everyone is fascinated by him. Everyone’s surprised that this older guy is competent. (Sub in “black” for “older,” by the way, and good luck with that pitch.) It’s Grandfather Knows Best.

There’s a saccharine child, Jules, who is tough to take. There’s an affair, Jules’ husband, that needs to be confronted. It’s the story of the successful businesswoman with a wreck of a personal life. But Ben understands and nurtures. He fixes. A desk full of unwanted crap? He cleans it up. Jules mistakenly sends a nasty email to her mom? He organizes a break-in to delete the email. Mommies are catty around the career woman? He puts them in their place.

“The truth is,” she tells him, “something about you makes me feel calm, or more centered.”

That turns out to be the mini-trend this movie is a part of: men as the calm, rational center of movies written and directed by women. (See: James Gandolfini in “Enough Said”; Sam Rockwell in “Laggies”; Jake Lacy in “Obvious Child” and “Girls.”)

It’s a Nancy Meyers movie (“It’s Complicated”; “What Women Want”), which is almost interchangeable with a Nora Ephron movie. Brooklyn is idyllic, leafy and sparsely populated; classic movies are always on TV. It’s both clean in the present and nostalgic for the past. And a massive lie.

Where have all the good men gone?
Hathaway is good. She’s moving in a movie that does the opposite of move me. Her “buried alone” speech is funny, and reminded me of Meg Ryan’s “almost 40” bit in “When Harry Met Sally.”

She also gives a talk to Ben and the boys (her employees) after too many drinks at the local bar, that is worth examining. It’s about What Happened to Men:

We all grew up during the “Take your daughter to work day” thing, right? So we were always told we could be anything, do anything. And I think guys got—maybe not left behind—but not quite as nurtured, you know? I mean, we were the generation of “You go, girl.” We had Oprah. And I wonder sometimes how guys fit in. They still seem to be trying to figure it out. They’re still dressing like little boys. They’re still playing video games. How, in one generation, have men gone from guys like Jack Nicholson and Harrison Ford to...  Take Ben, here. A dying breed. You know? Look and learn, boys.

This is interesting. I think it's getting at something that is true in our culture: a kind of white female privilege.

Seriously: Jack Nicholson a model for manhood? The guy pounding the steering wheel and picking on the waitress in “Five Easy Pieces”? Why not just pick Jake La Motta as your nostalgic model for manhood? Why not Travis Bickle? “A dying breed. Look and learn, boys.”