“Fate” lost about $300 mil off that total, grossing $1.2 billion, but that’s still, you know, astonishing, all the more so because it did it without much help from the good ol’ U.S. of A. You’d think muscle dudes in muscle cars would rule in the states, but “Fate” earned only 18.2% of its worldwide gross here. Is that low? Yes. There is no film in the top 100 worldwide grosses that has a lower U.S. percentage than that. Most aren't even close.

Basically, as the world has cared more about Dom (Vin Diesel) and his crew, we’ve cared less.

It’s about the nicest thing I can say about American culture at the moment.

Punch in something
“Fate” isn’t all bad. The intro of Hobbs (Dwayne “The Rock” Johnson) is telegraphed but fun. You see him in close-up cajoling unseen troops, telling them he chose them because they’re the fiercest warriors on the planet. 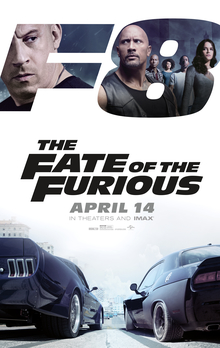 “Kids,” I thought. “Maybe junior high football players.” Better: girls soccer. Pre-game, on the field, he leads them in a Maori warrior dance that freaks out the other side, and when he’s visited on the sidelines by a government official with an assignment, he chastises the man for not knowing that a “Tay-Tay concert” means Taylor Swift. The Rock is good at this. I also like the official observing all the moms in the stands looking their way. Hobbs, with arms like oaks, says, yeah, they’re great at cheering on their kids. “Except,” the government dude says, “there seems to be more moms than kids. Way more moms.”

That’s fun. Then the plot kicks in. And what an idiot plot it is.

You know a film series has run out of ideas when it turns the protagonist evil (see: “Superman III” and “Spider-Man 3”), and that’s more or less what they do here. Dom doesn’t become evil; but because he’s blackmailed by Cipher (Charlize Theron), the greatest computer hacker in the world, he’s forced to do evil things.

Such as? Well, the assignment Hobbs gets, for which he recruits Dom’s crew, involves heisting an EMP device that can knock out an electronic grid the size of a minor city—or something. It’s in Germany—or somewhere. How do they get it? Do they sneak into some facility, take down guards, and then...  Yeah, no. They just have it. It’s literally cut to the chase: They’re driving away, glibly jawing with each other, with the German police on their tail. There’s a stunt with a wrecking ball that probably killed a bunch of cops but whatevs. More important is when Dom sideswipes Hobbs’ car and takes the EMP. The announcement to the rest of the team is made with all the gravitas of a newsman reporting on the JFK assassination: “Dominic Torretto just went rogue.”

So that’s the first evil thing Dom does, but you really gotta wonder about the second. Cipher and her team (mostly her team) hack into cars throughout Manhattan, which divert and trap a Russian official in a limo who’s carrying a nuclear football. In the aftermath of being stopped cold by dozens of cars that drop like confetti from elevated parking garages (pretty cool scene, actually), Dom shows up with his big boots and big arms and holds a torch near the limo’s gas tank. The Russians surrender the codes meekly. Then Dom has to fight through his team, who are waiting for him, which of course he does. Cuz he’s Dom.

All of which makes you wonder what Cipher has on him that makes him take so many lives and risk billions more. His Google search history? Photos when he had hair? Video when he was in a choir singing falsetto?

Neither do I, really. But she played a cop in that “Fast Five” one.

Right, now I remember. But why is he risking everything—family and his wife and his friends—for Elena?

And not. Why doesn’t he let his team, or Hobbs, or his wife, in on it? Doesn’t he trust them? And who wasn’t he willing to kill so this son could live? I mean, nuclear codes? Isn’t it bad enough that Trump has them? Here’s what one of the team says after Dom gets away:

They’ve got an EMP and a nuclear football. I don’t’ know what it is, but they’re building toward something.

Charlize is good, cooing to and threatening Dom’s baby in her arms. But as the world’s premiere computer hacker, she’s not exactly, well, hands on. She’s more Capt. Kirk spouting orders from command center. These orders include (and I shit you not) “Hack ‘em all!” and “Punch in something—it’s not right!”

Punch in something? Brilliant, Brainiac.

What is the fate of the Furious?
The final battle takes place in Russia—or someplace—and involves a nuclear sub which breaks through the ice and fires a heat-seeking missile at Dom in his muscle car. But Dom deeks out the missile (yes), and then, with it still on his tail, he drives his shit up and over the submarine, like Evel Knievel, causing the missile to do its chicken-coming-home-to-roost thing with the sub. Boom! And the good guys win. Again. Forever again.

There are, I'm sure, scenes more ludicrious in the long history of movies. But there shouldn’t be.

So why did Cipher need Dom? Who knows? Better question: How did Vin Diesel become a star? The Rock I get: arms like oaks and personality. Jason Statham, returning as Deckard, I get: parkour moves and personality. Diesel’s just a lug.

We’re stacked with players, by the way. Even without Paul Walker as Brian, the team consists of Dom’s wife, Letty (Michelle Rodriguez), over-the-top comic relief Roman (Tyrese Gibson), and Tej (Ludacris), who mostly insults Roman. Kurt Russell, chewing scenes, returns as secret agent Nobody. “Game of Thrones”’ Nathanlie Emmanuel returns as Ramsey, superhot computer hacker, while another “GOT” vet, Kristofer Hivju (Tormund), is Cipher’s right-hand man. The new blood—maybe the new Brian?—is Nobody’s by-the-book assistant, played by Clint Eastwood’s son, Scott, who learns to loosen up a little at the end. As all good white boys do.

Who do we lose? Elena, who is killed in cold blood by Tormund on orders from Cipher. Tormund buys it, too. Cipher survives for another day and another movie.

The fate of the title? I guess it’s that: more movies. Less their fate than ours.