I only saw “The Dark Knight” once in theaters, at a preview screening a few days before its July 2008 opening. Afterwards I wrote an MSN piece about it, “The Smart Knight,” which included the following lines:

My point: Once Batman stops being a vigilante and becomes a glorified cop he becomes absurd—a cop in a bat suit—and descends into camp. “The 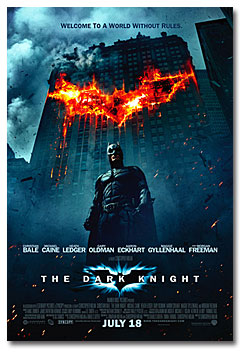 Dark Knight” ensured this wouldn’t happen by reinforcing his vigilante status and taking an axe to the bat signal. Even so, fanboys jumped on me for implying that other superhero films might be better than “The Dark Knight.”

Now that I’ve actually seen the movie a second time, four years later on DVD, I’d like to apologize to those fanboys. I was wrong in the above quote. “The Dark Knight” isn’t the smartest superhero movie ever made. In fact, it’s pretty stupid.

How does the Joker do this? He commit acts of terrorism. He tries to get the citizens of Gotham to reveal that they’re as ugly inside as he is.

First, he announces he’ll kill one person every day until the Batman takes off his mask and turns himself in. What happens? When Gotham’s district attorney Harvey Dent (Aaron Eckhart) holds a press conference saying we don’t give in to terrorist demands, the people lash back:

Reporter: You’d rather protect this outlaw vigilante than the lives of citizens?
Man 1: Things are worse than ever!
Cop: No more dead cops! [Other cops applaud.]
Man 2: He should turn himself in!

Then when a Wayne Enterprises employee, Reese (Josh Harto), is about to reveal Batman’s true identity on television, the Joker decides Batman’s too much fun. So he demands the death of Reese in an hour or he’ll blow up a hospital. What happens? All over Gotham, people start taking potshots at Reese. It’s up to the Batman, disguised as Bruce Wayne, to save him.

Finally, in the film’s climax, the Joker loads hundreds of barrels of explosives onto two ferry boats—one filled with criminals, one filled with civilians—and gives each boat the other’s detonator. At midnight, he says, he’ll blow up both ferries. If one boat blows up the other first, however, that one will be allowed to continue safely on its way. What happens? The ferry full of citizens votes to blow up the ferry full of criminals but no one can push the button. Meanwhile, one of the criminals (former wrestler Tommy ‘Tiny’ Lister), 6’ 5” and glowering, demands the detonator, and tells the ship’s captain: “I’ll do what you shoulda did 10 minutes ago.” Then he tosses it overboard. Midnight passes, by which time the Joker’s been defeated, and everyone’s safe. Our best side has been revealed.

In other words, threatened indirectly in examples 1 and 2, everyone caved. Threatened directly, in example 3, and people behaved nobly.

“Give up the Batman or there’s a one-in-10-million chance you’ll die.” Let’s give up the Batman! “Kill Reese or I’ll blow up one of dozens of hospitals in Gotham.” Let’s kill Reese! “Kill those murderers and rapists or YOU will be killed!” Uh... let’s take a vote.

Worse, despite his experiences with examples 1 and 2, not to mention his whole raison d’etre, Batman, in example 3, is convinced that both the citizens and criminals of Gotham will do the right thing. At one point, he and Lt. Gordon (Gary Oldman) have this conversation:

Gordon: Every second we don’t [take down the Joker], those people on the ferry get closer to blowing each other—
Batman (low growl): That won’t happen.

As Batman wrestles with the Joker, we get this exchange:

Joker: I’ll miss the fireworks. [One of the boats blowing up.]
Batman (low growl): There won’t be any fireworks!

Yes, you can drill down and say that in example No. 1 the people were asked to give up nothing of their own, just the Batman, so it was easier to cave. Yes, you can say that in example No. 2, the pool of potential assassins was larger than on the ferry boat, so you’re that much more likely to find one, two, or a dozen, willing to kill for a false sense of security. Yes, on the ferry boat they’re fighting for a real sense of security, a do-or-die situation,  but it’s still a tough thing to press a button and extinguish hundreds of souls. Most of us don’t have it in us. But what about the other boat? Could no criminal, who might’ve already killed dozens, push that button?

The Museum of the Hard-to-Believe
There’s so much I don’t believe about this film.

I don’t believe the Joker is able to redirect or misdirect Harvey Dent’s anger. Dent has a gun to the forehead of the Joker—the man responsible for both the awful last minutes of Rachel Dawes’ life and Dent losing half his face—and he doesn’t pull the trigger? Instead he goes after the cops who betrayed him to the Joker. He goes after the family of Jim Gordon, the uncorrupt boss of those corrupt cops. He flails.

And what’s up with that whole ‘White Knight’ crap? If Dent is revealed as less than pure, the good citizens of Gotham—if there are any—would give up hope? How many even know who Harvey Dent is?

Don’t get me started on all the traps the Joker springs in this thing.

Here are the various traps the Joker springs on the people and authorities of Gotham:

Whew. Breather? No, this is Chris Nolan. Onward.

For a madman, the Joker has to be the greatest organizational planner ever. Even while messing with you in Plan B, he’s apparently thinking ahead to Plan Z. The intricacy of his plans make D-Day seem like a sailboat ride on a Sunday afternoon.

It’s tough out there for a Batman
This is a tough movie to be Batman. In the first, “Batman Begins,” he’s proactive, stalking crooks in the night. Here, he’s back on his heels. He’s reacting more than acting. He’s taking punches. 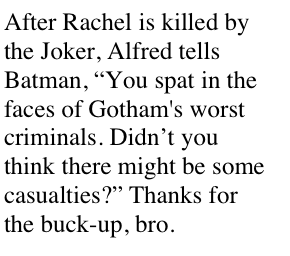 Is he slower in this one? He was such a ninja in the first movie that both criminals and moviegoers could barely see him. Maybe fanboys complained. That last fight with Ra’s al Ghul on the train was like a battle of shadows, but, ninja-wise, it made sense. Here, Batman’s not only not a ninja, he’s as stolid as Rocky Balboa in the 11th round.

Thank god he’s got so many good people around him. Alfred, for example. After Batman’s first encounter with the Joker, when Bruce Wayne says, “They crossed a line,” Alfred immediately responds, “You crossed the line first, sir. You squeezed them, you hammered them to the point of desperation.” After Batman saves Harvey Dent but loses Rachel and sits despondent over his role in all of this—in inspiring not good but madness—Alfred tells him, “You spat in the faces of Gotham's worst criminals. Didn’t you think there might be some casualties?” Spat in the faces...? Thanks for the buck-up, bro.

Well, at least Bruce has Lucius Fox (Morgan Freeman), who, when shown Batman’s Patriot-Act-like surveillance methods, says, “This is too much power for one man to have,” and “Spying on 30 million people isn't part of my job description.” OK, so no Lucius. But at least Rachel loves him. Oh right, the letter.

Poor dude can’t have a conversation with anyone without it turning into some part of the film’s philosophical treatise. I love me some Michael Caine but almost everything Alfred says is in this vein. Harvey Dent, too. “You either die a hero,” he says during a casual dinner, “or you live long enough to see yourself become the villain.” When I first heard it, before I knew that Harvey would die a hero and Batman would endure as a villain, it felt false to me. It rang loudly and off key. It announced itself.

Movies are only as good as directors allow them to be
I like some of what Nolan does. I like the idea that Batman inspires people in unintended, dangerous ways. I like that someone nefarious rises to reach Batman’s level of madness. I like the idea of blackmailing Batman to give himself up. That’s smart. But it’s lost in the relentlessness of Nolan’s direction and the Joker’s innumerable plans and schemes.

Yes, Heath Ledger is brilliant. And, yes, this is great dialogue:

Don’t talk like one of them. You’re not! Even if you’d like to be. To them, you’re just a freak. Like me! They need you right now, but when they don’t they’ll cast you out like a leper. You see, their morals, their code, it’s a bad joke. Dropped at the first sign of trouble. They’re only as good as the world allows them to be. I’ll show you. When the chips are down, these... these civilized people, they’ll eat each other. See, I’m not a monster. I’m just ahead of the curve.

Ahead of the curve. Great line.

This sets up our ferry-boat ending that depicts how some people don’t drop their moral code at the first sign of trouble. The problem? The Joker’s actually right. Or he’s half right. Moral codes aren’t necessarily dropped at the first sign of trouble, but, generally, we are only as good as the world allows us to be. Batman knows that, too. He should’ve picked up on it. He should’ve said:

Of course people are only as good as the world allows them to be. That’s why I’m here. I’m allowing them that chance.

He should’ve mocked the Joker:

It’s easy to bring the world low. It’s hard to lift it up. Why did you choose the easy way?

But it would’ve made for a better movie. “Sometimes truth isn't good enough,” Batman says at the end of the movie. And most of the time it is.

Audience identification
Listen, I know I’m talking in the wind here. I know “The Dark Knight” grossed the money it grossed, and has the fans it has, and no argument will sway them from their point-of-view.

So feel free to say it’s just a movie, and fun, and you’re not supposed to think about it too much. I’ll understand. Because I know most people don’t go to the movies looking for anything logical. Most people go just to watch the world burn.