I understand why this movie, despite being in the maligned horror genre, wound up on so many critics’ “best of ...” lists this year: It’s steeped in ambiguity. Even at the end, we don’t know if mother and son are truly haunted (by a ghost-demon), or metaphorically haunted (by the past). It’s almost like “Birdman” in this regard: Is this person crazy or is a little crazy happening in the world?

Amelia (Essie Davis) is a single mother, working at a nursing home, and raising her six-year-old son, Samuel (Noah Wiseman). 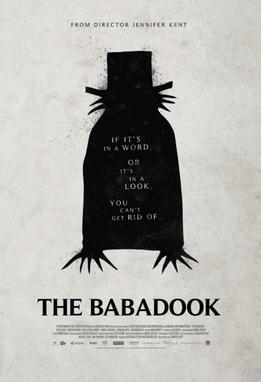 He’s a cute boy who sees monsters at night, but he’s odd and she’s harried. Sleep is interrupted. He’s bringing weapons to school, hurting other kids. Eventually the monster has a name, the Babadook, and one night, at Sam’s request, Amelia reads to him from a book she’s never seen: “The Babadook.” It’s a frightening children’s book with menacing pop-up figures and rhymes:

The last half of the book is nothing but blank pages. When she sees the effect the book has on Samuel she puts it away. But we know it will return. Those blank pages have to be filled.

A lot of the movie fits within such traditional horror tropes, but they’re subtler; both more grounded and more ambiguous.

To be honest, I kind of figured it out fairly early. Samuel lost his father the day he was born—car accident on the way to the hospital—and one day, at her birthday party, his cousin teases him. She say he doesn’t even have a father. He insists he does. Insists.

That’s when I knew: Baba-dook. Father.

Samuel gets worse: angry, irrational, out of control. In a sense, he becomes a little monster—a more outré version of the way kids are often little monsters—and he and Amelia become more and more isolated. He’s suspended from school, she’s given time off from work, she becomes estranged from her sister. The “Babadook” book somehow winds up back in Samuel’s room, so Amelia rips it up and throws it in the garbage outside; but then it reappears on her doorstep, taped together, and those blank pages are now filled. Is that her in the book? Is she strangling their dog? Is she stabbing her son?

(Cf. Amelia’s line about her husband: “I have moved on. I don’t mention him. I don’t talk about him.”)

“LET ME IN!” the book says. “Don’t let it in!” Samuel yells at her. But it happens. Capture is inevitable in horror stories.

Worms as food or food for worms
It’s an odd thing, though. As soon as the Babadook “gets her,” as soon as she becomes possessed by it, I stopped being afraid. Amelia is us, our eyes and ears, and the worst thing that can happen to her has already happened to her. More: she’s the strong one now. She’s in control.

Overall, in fact, I wasn’t that frightened by the film. And I scare easily.

I did like the ending. She barfs up the Babadook, more or less, and banishes it, more or less, to the basement. They live with it—this ghost or demon of her dead husband. Or maybe it’s just the weight of the memory of her dead husband. You can make that argument. You can even argue about the worms Samuel digs up in the garden and gives to Amelia to give to the Babadook. Are they to keep the Babadook alive—his food—or are they there to slowly eat him? To finally end him? Is it worms as food or food for worms?

I lean toward the former. Overall the movie’s about suppression. What we repress grows malformed and strong. (“The more you deny/ The stronger I get.”) The goal is to live with the awful thing in order to keep living, and that’s what Amelia and Samuel achieve. That awful thing in their basement? In most horror movies, that’s the starting point. Here’s, it’s the happy ending. It’s harmony.