I’m curious if they did it on purpose.

The movie opens at a reform school, where Ann Sheridan’s onetime-delinquent kid brother, Gabe (Frankie Thomas, quite good), is the foreman of the machine shop. He compliments one kid working a lathe, then gets into a fight with another kid who is fashioning a knife. 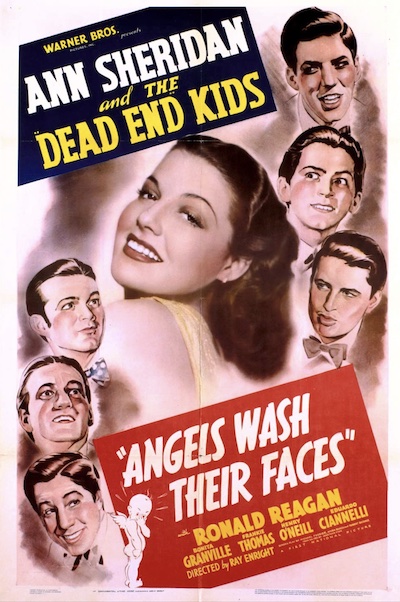 “The Angels Wash Their Faces” isn’t a sequel to “Dirty Faces.” Its working title was the more apt “The Battle of City Hall,” but I’m sure someone figured, “Hey, let’s glom off the hit movie from the year before.” Like that one, it stars  Ann Sheridan and the Dead End Kids (and Burke), but they’re playing different characters. Well, “different.” Their names are different.

Gabe/Thomas is the new kid in town. We’re told he grew up in a bad neighborhood, blah blah, which is why he went bad, blah blah; and besides, Remson (Henry O’Neill), the man in charge of the reform school who moonlights as the city DA, knows a good kid when he sees one. So despite the fight with Burke, Remson paroles him—with a warning that turns out to be prescient: “Watch out for the grown-ups.” Then Gabe and sis, Joy Ryan (Sheridan), move into a newer, better neighborhood.

Well, “better.” The Dead End Kids still prowl the joint. We see them de-pants one kid before picking a fight with Gabe. He fights back. Thomas, with curly hair parted on the side, looks like a pushover but he gets a good determined look in his eyes. He’s so good in this role, in fact, I wondered why I hadn’t heard of him before. Turns out he played Ted Nickerson, boyfriend to Bonita Granville’s Nancy Drew, in a four-movie series in the late ‘30s; then he did some cadet movies before serving in the actual Navy and Coast Guard during World War II. When he returned, it was mostly to TV. His big role was the titular “Tom Corbett, Space Cadet” in the early 1950s. After that, he gave up acting for writing and production, but mostly he made a living as a bridge master: teaching it and playing it. He died in 2006, age 85.

Bonita Granville, by the way, is also in this one. She plays Leo Gorcey’s kid sister Peggy, who is forever running to keep up with/join the Dead End Kids. She’s basically a precursor to Anybodys two decades before “West Side Story.” She could've been the inspiration for Anybodys.

Leaving reform school, Gabe had promised to stay out of trouble, so it feels odd he joins the Dead End Kids’ gang, “the Termites,” without a second thought or a scolding from his sis. But by this point in their Warner Bros. career, the Kids have had their rough edges smoothed, and, though they're still rough-and-tumble, and sometime bullies, the movie takes a boys-will-be-boys attitude about them. The true crooks, anyway, are higher up.

Gabe’s initiation into the gang involves fake guillotines and a fake dousing with gasoline, which is bad luck for him. Because the real gasoline he bought winds up being used in an arson, which makes him a suspect, and which leads to the assistant DA nosing around and knocking on doors. And not just any ADA: Pat Remson, the son of the DA. And not just any actor playing him, either: It's Ronald Reagan, future president of the United States. He shows up at Joy’s door and makes a play while gabbing away. At one point he says:

You know there’s more than a bunch of kids playing with matches back of this fire situation. Some organization in the background. Some one man running the whole show. But it’s all very elusive, I can’t get my teeth into anything.

That's a lot of leaps there without much information. Reagan's way.

I haven’t seen Reagan in much, but watching this I get why he never became a bigger star. It made me think of Gore Vidal’s 1983 takedown of the man: “… he was, far and away, Hollywood's most grinding bore—Chester Chatterbox, in fact. Ronnie never stopped talking, even though he never had anything to say except what he had just read in the Reader’s Digest, which he studied the way Jefferson studied Montesquieu."

So maybe this line of Reagan’s to Sheridan was a Hollywood in-joke? “That’s the marvelous thing about you. You’re the only person in the world who likes my dialogue.”

Anyway, while Reagan woos the Oomph Girl, the real power in town, the one man running the whole show, Martino (Eduardo Ciannelli), sets another building ablaze, and one of the Dead Enders, Sleepy (Bernard Punsly), who’s got a thyroid problem, dies. And even though Gabe was the one who nearly got him out, he’s blamed, arrested, put on trial and convicted. And the judge sentences him to 10 years in the state pen. Remember that “watch out for grown-ups” line? Truer words. Oddly, the guy who said this is the guy who convicts him—Reagan’s dad. Leading Sheridan to chastise the old man: “In this city of graft and corruption, you’ve overlooked a thousand lawbreakers to convict one innocent boy!”

I kept waiting for Joy to break up with Ronnie, or for Reagan to show his worth by saving the day, but neither happens. He still wants to marry her, she still wants to marry him (despite his dad convicting her innocent brother), but she can’t because of the disgrace. That is, she doesn’t want to disgrace him.

So if not Reagan, who comes to the rescue? Our stars, of course, the Dead End Kids. There’s some honorary mayoralty a kid can win, and the lead Dead Ender, and future Burt Munson on “All in the Family,” Billy Halop, playing Billy Shafter, runs for it. And between him studying and the Dead Enders threatening the competition, he wins.

I don’t know if they had real such honorariums back in the day, but I doubt they were like what the film shows us: the real mayor giving up his office and going on vacation for a week while Billy and the gang take over. They think they can pardon Gabe but can’t. So they go through various channels, and we get some not-bad lines:

Judge, we want a writ!
Yeah, a writ of hocus pocus or somethin’.

Or after Reagan mentions the fire chief might be in on it.

Billy: Why don’t you go out and arrest him?
Reagan: I can’t arrest him on suspicion. I need proof.
Billy: We’ll get you all the proof ya need!
Huntz Hall: We’ll get you enough to hang the guy.
Leo Gorcey: What’s more, we’ll hang him.

Eventually, they get the rats on the run, they get a confession, etc. etc. Happy ending to a mostly dull film. Sheridan is given little to do, Chester Chatterbox doesn’t help. But the kids are alright.

Dead end
But not for long. This is the sixth movie they made as “The Dead End Kids” between 1937 and 1939—not even including “Dead End”—and there would only be one more. Then Halop went off to become a junior leading man, while Huntz Hall, Leo Gorcey and a few others became the Bowery Boys. Most of them were in the war, then there was the end of the studio era and the transition to TV. Most of them didn’t live long. Bobby Jordan died in 1965, Gorcey in ’69, Halop in ’76—all from complications with alcoholism. Sheridan also died young, in 1967, from cancer. Ironically, the Dead End Kid who dies in this one, Punsly, lived the longest: until 2004.

Chester Chatterbox, meanwhile, kept going and changed the world. Watch out for the grown-ups, indeed. 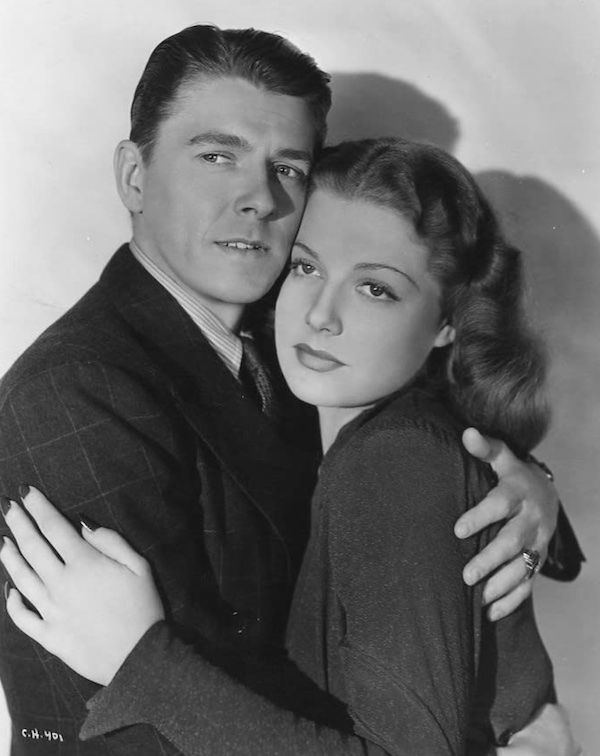 The Oomph Girl in a less-than-excited clinch with Chester Chatterbox.