WARNING: There are SPOILERS coming—the likes of which none of us have ever SEEN!

Why not “Shelter”? Why not “Storm”? Isn’t that more direct? What do you get when you add that clunky verb to the title?

You get the imperative. You get a warning. But who’s giving the warning, who’s receiving it, and what are we being warned about? 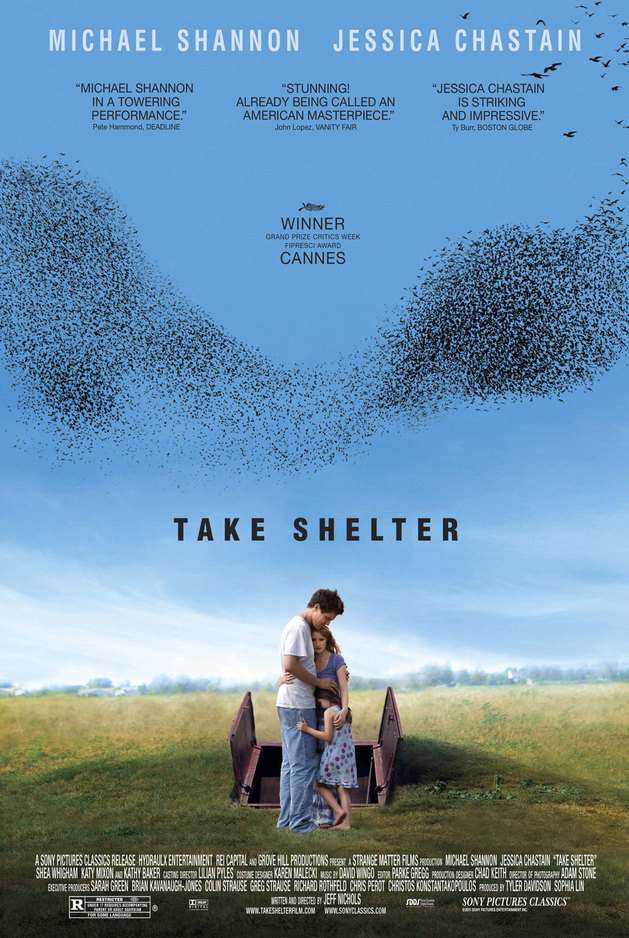 Curtis (Michael Shannon) is a blue-collar worker in Elyria, Ohio, with a beautiful wife, Samantha (Jessica Chastain), and a three-year-old, deaf daughter named Hannah (Tova Stewart). For a Michael Shannon character, he's fairly normal. We see him sign “I love you” to her in the morning. We see him come home late at night and stand by her bedroom door as she sleeps. “I still take off my boots to not wake her,” he tells his wife when she comes up and puts her arms around him. Life is still a struggle. Samantha sews to make extra money. Hannah isn’t playing with other children. But it’s not bad. “You got a good life, Curtis,” his friend and co-worker Dewart (Shea Whigham, a fellow “Boardwalk Empire” actor) tells him. “I think that’s the best compliment you can give a man.”

Then Curtis begins to have bad dreams.

The dreams take the same form. A storm is coming and it begins to rain. But it’s not water—it has the consistency of motor oil—and Hannah is imperiled and/or Curtis is attacked. In one dream his dog gets him. In another, it’s Dewart. People attack them in their car and carry Hannah away. They attack them in their home and all of the furniture levitates. One morning, he wakes in a sweat. Another, he wets the bed. He hides all of this from his wife. She assumes he has a cold.

He begins to act badly. His dog has always been a beloved indoor dog but now Curtis sets up a small wire-mesh fence around the doghouse outside and sticks him there. “Sorry about this, buddy,” he says. He opens up the old storm shelter in the backyard, goes inside and breathes as if he's home. At the library he checks out books on mental illness—his mother first suffered from paranoid schizophrenia in her 30s, and he’s now 35—but on the way home he buys huge quantities of canned goods.

He keeps doing this kind of left hand/right hand thing. He seems to realize his paranoia is a consequence of his mental illness, and sees a therapist, and takes pills, etc., to be cured of it; but he still acts on the paranoia. Things must be done to get ready. So he and Dewart borrow equipment from work to dig a huge hole in the backyard to expand the shelter. He takes out a risky bank loan to pay for the expansion. “Are you out of your mind?” his wife asks.

Initially, the sleeping pills help. He wakes up, no bad dreams, white curtains billowing. But he’s merely chased the bad dreams into daylight. At work, under blue skies, he hears thunder that Dewart doesn’t. Driving home from a sign-language class, wife and daughter asleep in the back, he stops the car on the side of the road and watches a lightning storm light up the horizon. “Is anyone seeing this?” he wonders.

We assume the problem is compounded by his lack of communication. “If only he’d talk to his wife,” we think. He does and it doesn’t help.

When he isolates himself from anyone he dreams about—giving away his dog to his elder brother, talking the boss into taking Dewart off his crew—we wonder what would happen if he dreams about Samantha. Then he does. That morning he flinches away from her touch. A second later, he sees the boss in the backyard, looking over his expanded storm shelter, and panics. Samantha had managed to get their daughter an operation for a cochlear implant, and when she’s told that her husband’s insurance will pay for most of it, that he’s got good insurance, it’s like a rumbling of thunder in the distance. We know he’ll lose it. And he does. The operation is still five weeks away when the boss shows up, alerted by Dewart over the equipment “loan,” and fires him. There’s a great economical scene when Curtis drags himself back into the kitchen, where his wife is doing dishes. “I’ve been fired,” he says. She stops, doesn’t look at him, her back up. “What about the health insurance?” she asks. “I got two more weeks,” he answers. She walks up to him, slaps his face, takes their daughter on her hip, opens the side door, opens the screen door, leaves. The choreography alone recommends the scene.

At this point in the movie, we have two possibilities: Curtis is right and vindicated or he’s wrong and nuts. Generally, I'm not a fan of either/or movies.

This sense of limited choices is crystallized—gloriously, I should add—when Samantha insists they go to a Grange Hall function and eat lunch with their neighbors. They get nods, smiles, paper plates with chicken and baked beans. But Dewart is there, still angry over the betrayal, and he starts a fight with Curtis. But it’s Curtis, tall and lanky, who ends it with a kick, then stands and upends their long, fold-up table. And suddenly he's shouting at his neighbors like a Pentecostal preacher:

There’s a STORM coming! The likes of which none of us have ever SEEN! And not a one of us is prepared for it yet!

Up to this point, Curtis has been bottled up, and we’ve been bottled up with him, so the outburst itself is like a long-delayed storm. If he’s told anyone about his dreams, he’s mentioned them in mumbles, embarrassed, full of doubt. In this scene, doubt is removed. He sounds like a prophet. Or a crazy man. We wait to find out which.

We don’t wait long. That night he has another bad dream ... until Samantha wakes him because a real storm is bearing down on them. They grab their daughter and make for the shelter, where, inside, they huddle wearing gas masks and oxygen tanks, expecting the worst. After sleeping, their opinions diverge. Should they go outside? “What if it’s not over?” he asks, doom in his voice.

Oddly, I began to flash to a bad 1999 comedy, “Blast from the Past,” in which Christopher Walken plays a man in the early 1960s so paranoid about the Cold War that he builds an extensive bomb shelter in his backyard, down which he takes his family during the Cuban Missile crisis. They live there for 35 years. I’ve long thought that Shannon should play Walken’s son in a movie—there’s not only a physical resemblance but both men play determinedly off-kilter roles—and he does, in a sense, in this one. Thankfully, it’s in a better movie. It’s also a stunning performance by Shannon, who’s getting Oscar buzz.

But again, we're down to an either/or proposition. Either they stay in the shelter forever, perhaps even die there, or they go outside where the world is either ruined or being cleaned up after a nasty summer storm. It takes cajoling from Samantha to get them out. “This is what it means to stay with us,” she tells him. “This is something you have to do.” So he does. He opens the storm doors, shutting his eyes tightly on his imagined apocalypse ... only to open them on neighbors and workers cleaning up fallen branches and power lines after a bad summer storm.

Sitting in the audience, I was reminded of all the hand-wringing and apocalyptic-warnings of the U.S. after 9/11. What do you do with the thing you fear the most? Do you let it control you—this thing you can’t control? Do you take the family into the storm shelter, real or metaphorical, and hole up there? Or do you live your life? Most movies, and not just horror movies, teach us to fear, and “Take Shelter,” I felt, was teaching us the opposite. Its message was Rooseveltian: It was our fear we needed to fear. It took a tortured path, through an atmospheric, often painful movie, to this realization. But realization came.

Then it went. Curtis sees a psychiatrist, not just a therapist, who recommends distance from the storm shelter, the thing Curtis thinks will keep him safe. So off they go to the beach. What beach? I assume along Lake Erie. There, Curtis and his daughter build sand castles, those careful constructions designed to get wiped away, and he seems to be enjoying himself. Then Hannah points toward the water. He’s slow to respond, but when he does it’s with a mixture of shock and recognition and vindication, and he slowly stands; and in their beach house, Samantha sees it, too, and goes outside as the rain begins. But it’s not rain. She rubs the dirty substance between her fingers, as Curtis did in his dreams, and he looks back as if to say, “See?” She nods. She knows now. And only then does writer-director Jeff Nichols pull back so we can see what they see: a huge storm over Lake Erie, with multiple tornadoes bearing down on them, the likes of which none of us have ever seen.

That’s the end. That’s the image we take with us from the theater.

Afterwards, the four of us—Patricia, Vinnie, Laura and I—had dinner in Wallingford and talked about the movie. Vinnie couldn’t abide the new ending; he wanted the old ending. He only perked up slightly when I mentioned that the new ending could still be a dream, Curtis’ dream, or maybe even Samantha’s. Maybe she was in on it with him now. But that hardly resonates, does it? To me, if the ending is a dream, it makes the movie worse.

But what to make of the new ending? Curtis, instead of being a loon, a mild schizophrenic, is in fact a prophet; and the movie, instead of a mild warning against fear, is a stern warning to fear. The title, in this respect, could be part of that warning. “Take Shelter” isn’t just what Curtis does, it’s what Nichols is telling us to do. He’s telling us a storm is coming the likes of which none of us have ever seen. One assumes he’s talking about global warming/climate change. You could argue that “Take Shelter” is the most powerful movie about climate change ever made because it isn’t about climate change until the very end. Until it’s too late. “Is anyone seeing this?” Indeed.

Unless you choose to see the storm as a metaphor. In which case it could be about ... anything: corporations, terrorism, Sarah Palin, Barack Obama. Prophets of the world unite! The only thing we have to fear is... the end of everything we know and love. And it’s right around the corner.