I remember the early criticism of Woody Allen’s “Zelig” back in 1983: It was good, people said, but it made you want to see a Woody Allen movie.

The movie is only 75 minutes long, and, unlike “Take the Money and Run,” his earlier, funnier, but less profound mock-documentary, this one is a true mock-documentary, since it never deviates from what a real documentary can show us. “Take the Money” gives us footage of Virgil Starkwell’s high school days, and prison days, and robberies—footage no documentarian could shoot. “Zelig,” by the auteur Woody, gives us nothing that isn’t, in a sense, in the historical record of the 1920s and ’30s. As a result, the Woody Allen character in the film, Leonard Zelig, is doled out in bite-sized bits. We don’t see him much and hear him less.

Hearing his voice for the first time, in fact, is a startling moment. 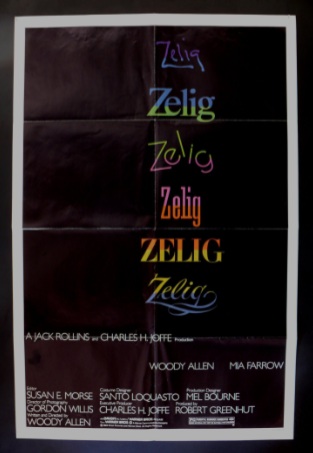 The premise of “Zelig” is brilliant. In the 1920s, the decade when pop culture began, a man is discovered who has such a need to belong, to blend in, to be safe—who, in other words, has such a wish for assimilation, particularly the post-schtel, post-pogrom Jewish wish for American assimilation—that he automatically changes his physiognomy to blend in with whomever he’s around. With the Chinese, Chinese. With the obese, he turns fat. Sitting with gangsters, his eyes turns cold, his face toughens, and there’s suddenly a scar running down his right cheek. A second later, he’s a light-skinned black man playing in a jazz band. He shows up for a Yankees spring training game and winds up in the on-deck circle, while Babe Ruth takes his swings.

He’s all of these different characters. But when we first hear his voice, seven minutes into the film, in conversation with Dr. Eudora Fletcher (Mia Farrow), it’s the familiar Woody Allen character we’ve known and loved forever: quick and buoyant, with an underside of mischief (and, here, mendacity), along with throat clearings and a tendency to land hard on sentence-ending consonants.

Fletcher: What do you do?
Zelig: Who me? I’m a ... psychiatrist.
Fletcher: Oh yeah?
Zelig: Yeah. I work [clears throat] mostly with delusional paranoids.
Fletcher: Tell me about it.
Zelig: Oh, there’s not much to tell. ...I studied a great deal. I worked with Freud in Vienna. We broke over the concept of penis envy. Freud felt that it should be limited to women.

While it’s great to hear his voice, it feels wrong. Leonard Zelig is all about fitting in, while the Woody persona, though influenced by many, including Bob Hope, stands out. It is uniquely him.

I also remember how “Zelig” almost defied criticism, or analysis, since, within it, you had intellectuals—Susan Sontag, Irving Howe, Saul Bellow—already pontificating on the Zelig phenomenon. In this manner, Woody beat movie critics to the punch.  Howe, with an amused upturn of the mouth, even states what I just stated above about Jewish assimilation:

When I think about it, it seems to me that his story reflected a lot of the Jewish experience in America: the great urge to push in and find a place and then to assimilate into the culture. I mean, he wanted to assimilate like crazy.

Finally, I remember “Zelig” being a turning point for Woody. He was already our finest comedian when in 1977 he gave us “Annie Hall,” the romantic comedy by which all other modern romantic comedies are measured (and come up short), then “Manhattan,” which put him on the cover of Time magazine, before stumbling with “Stardust Memories” and “A Midsummer Night’s Sex Comedy.” Not only was “Zelig” a sign that he was back, but it was the beginning of his great mid-1980s period, marked by astounding originality and creativity. For five straight years, from 1983 to 1987, he wrote, directed and starred in “Zelig,” “Broadway Danny Rose,” “The Purple Rose of Cairo,” “Hannah and Her Sisters” and “Radio Days.” Interestingly, all but “Hannah” are backwards-looking. Three are set in the 1930s. 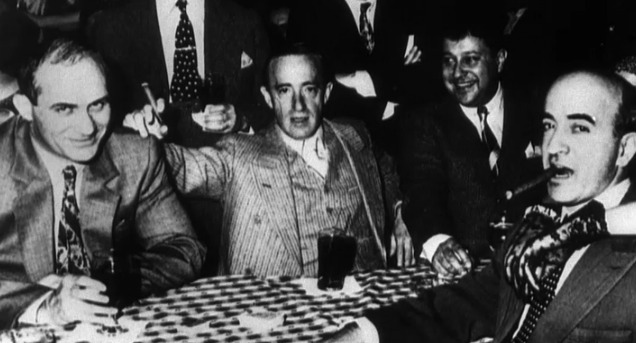 Leonard Zelig as a Chicago gangster... 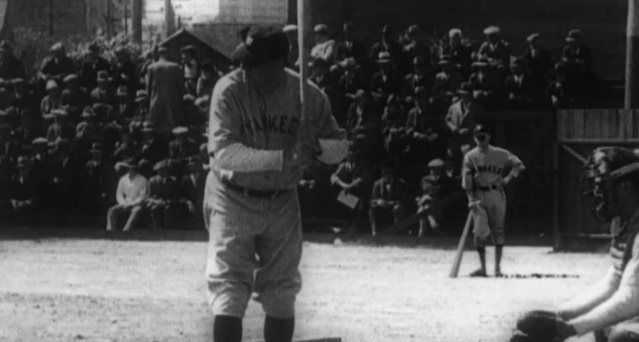 ...and waiting on deck while the Babe takes his cuts.

So that’s what I remembered about “Zelig.” What I’d forgotten, what came back to me upon a recent viewing, was just how funny the thing is.

Narrator: Bullied by anti-Semites, his parents ... side with the anti-Semites. They punish him often by locking him in a dark closet. When they are really angry, they get into the closet with him.

When Zelig is removed from Manhattan Hospital by his half sister Ruth and her lover, businessman and carnival promoter Martin Geist, who exploit him, two former Daily Mirror reporters tell us of Geist’s background:

He was selling the same piece of property to a number of people. Matter of fact, a congressman from Delaware bought it twice.

Then there’s the following bit. I didn’t need anyone to remind me of it, because I could never forget it, because it made me laugh so hard.

It’s that moment after Ruth and Martin Geist turn Zelig into a kind of sideshow freak in the U.S. and Europe, then come to an ignominious end in a lovers’ quarrel over a Spanish bullfighter. Zelig is returned to the care of Dr. Fletcher, who is trying to learn more about Zelig and cure him in her country estate. She hypnotizes Zelig and the sessions are filmed:

Fletcher: You will become completely honest .. .Now how do you feel about it here?
Zelig (speaking slowly, under hypnosis): The worst. I hate the country. I hate the grass, the mosquitoes. The cooking... Your cooking is terrible. Your pancakes. I dump them in the garbage when you’re not looking. The jokes you try to tell when you think you’re amusing: long and pointless, they have no end to them.
Fletcher (discomfited): I see. And what else?
Zelig: I want to go to bed with you.
Fletcher (perks up): That surprises me. I didn’t think you liked me very much.
Zelig: I love you.
Fletcher (genuinely surprised): You do?
Zelig: You’re very sweet. Cuz you’re not as clever as you think you are. You’re all mixed up and nervous. And you’re the worst cook. Those pancakes. I love you, I want to take care of you. ... No more pancakes.

Comedians often talk about how this word is funny and that one isn’t. “Pancakes” is a case in point. It’s the exact right word, the exact right food. Something about it. I can just imagine those leaden things. It still makes me laugh. 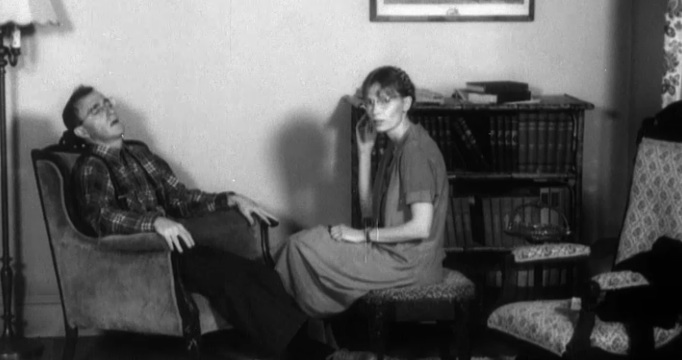 Some of the jokes in “Zelig” are so jokey they recall the earlier, funnier movies. The “get into the closet with him” above is similar to the “Take the Money” joke about chain-gang members being locked into a sweatbox with an insurance agent. (Hell is being alone in an enclosed space; real hell, Woody will tell you, is being with others in an enclosed space.)

In “Love and Death,” when Diane Keaton’s character talks about the wonder of Nature, Allen’s character, Boris, responds in classic Woody fashion: “To me, nature is... I dunno, spiders and bugs, and big fish eating little fish, and plants eating other plants, and animals eating... It's like an enormous restaurant.” In “Zelig,” Allen adds human beings to this equation. Slowly, under hypnosis, he tells Dr. Fletcher about his childhood: “My brother beat me. My sister beat my brother. My father beat my sister and my brother and me. My mother beat my father and my sister and me and my brother. The neighbors beat our family. People down the block beat the neighbors and our family...”

You know the “It’s funny cuz it’s true” line? In a way, this is not that funny cuz it’s true. The world is a dangerous place, and the tension for the individual, even in a civil society of relative safety, is between remaining solitary and free or subsuming oneself within the anonymity and safety of the group. Zelig does the latter, we’re told, “like crazy.” Thus the great joke at the end when he winds up in Germany, a member of the Third Reich, near Adolf Hitler giving a speech. The primary joke here is that Woody, one of the most Jewish of comedians, could become a member of the Third Reich in the first place. The secondary joke is how Zelig, awakening from his trance by the appearance of Dr. Fletcher in the crowd, disrupts one of Hitler’s histrionic speeches by waving at Dr. Fletcher. In a way it’s not just Zelig waking up; it’s the individual emerging from the mass. Finally, Nazi-Zelig reveals, without stressing it too much, that what safety there is within a group is always temporary. A Nazi in 1933 was safe; a Nazi in 1944 or ’45 was not. 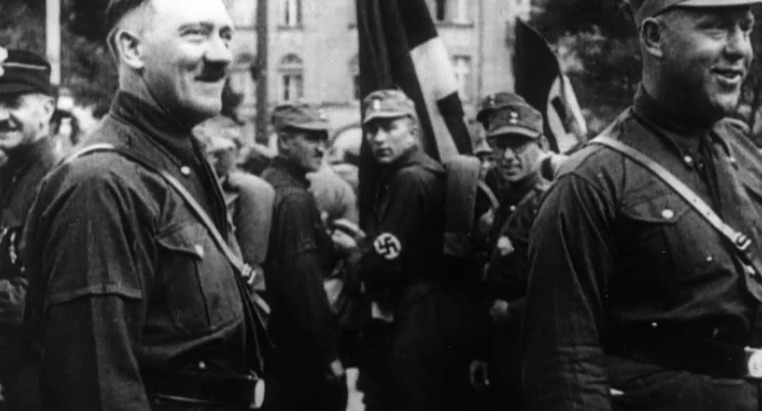 A Woodyish brownshirt (with glasses) near the real Adolf Hitler ... 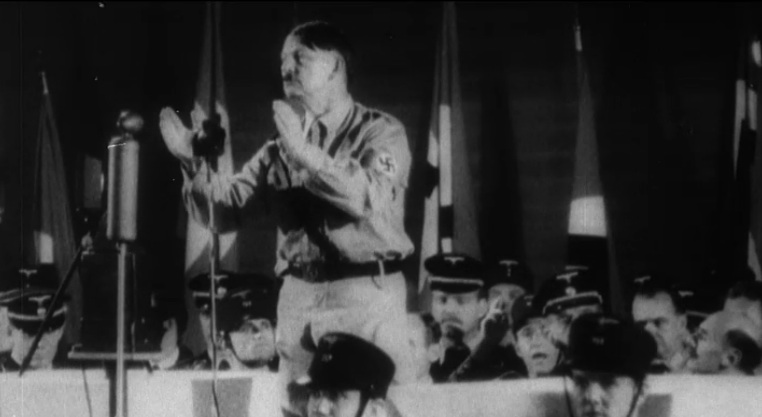 ...while the real Woody wakes up behind an actor playing Hitler.

There’s another reason I loved “Zelig” this time around, and it didn’t hit me until I re-watched “A Midsummer Night’s Sex Comedy.” That movie, which wasn't that funny to begin with, was also mannered in the Woody Allen style. He keeps giving us the still camera shot, where characters converse with other characters off-camera. Sometimes both characters move off-camera and converse. Sometimes it’s so obvious it distracts from the proceedings.

None of that here. “Zelig” is a parody of a straightforward documentary and remains consistently within that framework. It’s not allowed to be mannered.

“Zelig” is the second mock-documentary Woody did after “Take the Money and Run.” Both are great; both are hilarious. One wonders why he never did another. Maybe it's time.