“Suffragette” is one of those fall prestige pictures we suffer through: sympathetic characters fighting historical injustices we’ve long corrected. These types of films should make us feel good—since society has long corrected these things—but they rarely do. There’s a weight to them that should be the burden of the injustice but often feels like the weight of self-importance.

“12 Years a Slave” had the advantage of being based upon an historical document, while the lead was a person who actually existed. “Suffragette” includes a few such people in supporting roles (Emmeline Pankhurst), but most, including the lead, are either composites or fiction.

For all that, it’s not bad.

Taking a Mulligan
It helps that Carey Mulligan plays Maud Watts, a 24-year-old laundress, wife and mother, who, during the course of the film, changes from someone on the sidelines to a major actor in the movement. 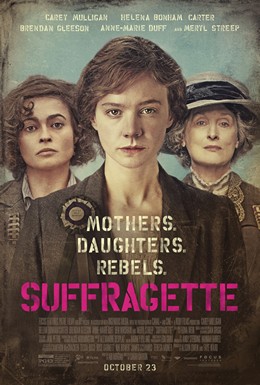 Remember at the 2000 Academy Awards when producers thanked Russell Crowe for filling “a whole arena with the force of your face”? Mulligan is like that on a gentler note. Two scenes in particular stand out: when she testifies before a government committee looking into granting women the right to vote; and when she looks up, beaming with hope, as Pankhurst (Meryl Streep) rallies a crowd after they are once again denied that right. Something about Mulligan makes me fall in love with her almost every time I see her.

Maud gets into the movement gradually but her life is upended rapidly. She initially denies being a suffragette (cf., a lot of folks with “feminist”), but after she’s jailed for the first time, she loses, in succession: her home, husband, son, job. She has no rights in the matter. That’s what she’s fighting for.

Losing her son is particularly heartbreaking, but then she gets over it. A little too quickly, really. She throws herself headlong into the movement. She helps bomb mailboxes and cut telegraph wires—the hacking of its day.

Others flit in and out of the movement. When the going gets tough, they go. This includes Violet Miller (Anne-Marie Duff), the co-worker who initially recruits Maud, and Edith Ellyn (Helena Bonham Carter), a pharmacist, older and steadier and determined. When it's decided to confront King George V on Derby Day, only Maud and Emily Davison (Natalie Press) make it to the track. When they are prevented from confronting the king, Emily makes herself  a martyr: She walks onto the track during the race and is trampled to death.

Watching, I didn’t realize this was a seminal event in the British suffragette moment, so kudos to director Sarah Gavron (“Brick Lane”) and screenwriter Abi Morgan (“Iron Lady,” “The Invisible Woman”) for making me learn something. But it’s still an odd ending. Emily is trampled, there’s a march in her honor, and the fictional march is replaced by historical footage of the actual event. I like that. Then we get a timeline of women’s suffrage throughout the world. I like that, too. In Britain it was 1918—or five years after Davison’s death. And that was just for propertied women over 30. Younger, poor women didn’t get the vote until 1928—or 15 years after Davison’s death. So the connection between climax and resolution feels tenuous, which it shouldn’t in drama but often is in life. The arc of the moral universe, etc. Not sure how you fix that in historical drama.

But I do appreciate the timeline. 1971, Switzerland? Really?

Owning ‘slave’
There was a mild controversy about the film before it opened, when Mulligan, Streep, et al., were photographed wearing T-shirts with words from Pankhurst: “I’d rather be a rebel than a slave.” Some black people objected. They felt the condition of white, working-class women in early 20th century Britain wasn’t akin to slavery. And it wasn’t. But it’s a silly objection. You’re making our side look bad. “Suffragette” isn’t the enemy.

Besides, if you’re going to object to the shirt, object on logical grounds. Generally, if you posit, “I’d rather be X than Y,” X should be somewhat pejorative, too, and maybe in 1905 “rebel” was viewed that way. But by 2015? Everyone wants to be a rebel. Even one unhip enough to actually have a cause.