I heard it was bad and the numbers on Rotten Tomatoes agree:

Look at that chronology, by the way. We’ve had nearly as many “Star Wars” features in the last five years (five) as in the previous four decades (six). No wonder this galaxy feels overdone. And of those 11 films, even crap like “Attack of the Clones” or “Solo” was considered fresh. “The Rise of Skywalker” is only the second film in the canon, after the sterile “Phantom Menace,” to get labeled “rotten” by the critics. Or by RT’s algorithms.

It’s really not that bad. You know what it seemed like to me? Another “Star Wars” movie. “Last Jedi” didn’t seem good enough to get a 90s rating and this one isn’t bad enough to rate in the 50s. They all just seem the same. That’s the real critique.

Errata
Why that subtitle? “Rise of Skywalker”? He’s barely in it and she’s revealed to be a Palpatine. Oh right. 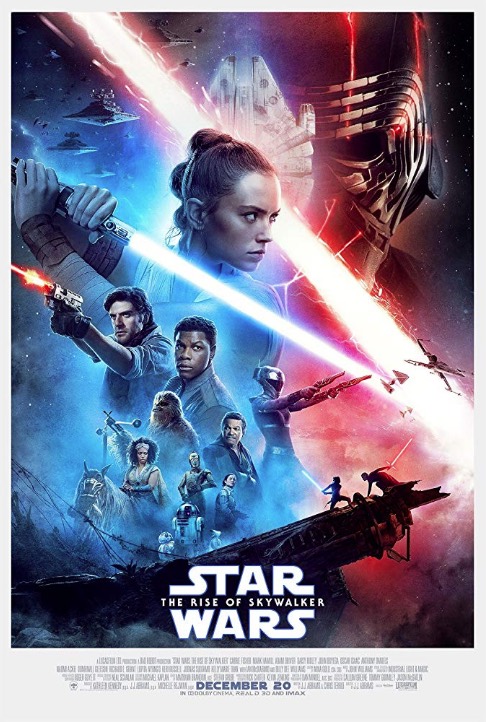 At the end, on Tatooine, after Rey (Daisy Ridley) buries the Skywalker lightsabers in the sand, a passerby asks her name, and she replies “Rey Skywalker.” Because I guess she’s carrying on his tradition rather than Palpatine’s. She’s the rise even as the others have fallen.

One of the main criticisms is that it’s a “fan service” movie. Whatever its rabid fan base has objected to in the past, writer-director J.J. Abrams tries to correct here. So in “Last Jedi” Rose Tico (Kelly Marie Tran) keeps schooling Finn (John Boyega), who seems stupid and pointless. No worries. Now he’s “Force Sensitive” while she’s relegated back to cameo status. And hey, how come Chewie never got a medal with Luke and Han at the end of the original 1977 “Star Wars”? No worries. He gets it here—handed to him by Maz Kanata (Lupita Nyong’o) after Leia’s death. And good god, why does Luke Skywalker, the hero of this whole, long affair, flee to a distant planet, Ahch-To, after his nephew turns to the Dark Side? That doesn’t seem very heroic. Well, Luke agrees with us now that it was a bad move:

Rey: I saw myself on the dark throne. I won’t let it happen. I’m never leaving this place. I’m doing what you did.
Luke: I was wrong. It was fear that kept me here.

Except these corrections don’t correct anything. The original error still exists. Luke went from whining on a desert planet to moping on a water planet without ever gaining a wisdom commensurate with his powers.

Maybe the biggest change relates to Rey’s origins. From my “Last Jedi” review:

The movie does go off in some new directions—notably with Rey’s lineage, which isn’t related at all to the Skywalker/Kenobi clan. Thank god. She’s a nothing from nowhere. She’s the exceptional borne from the unexceptional. In this way, the Force is being democratized. Cf., the kid before the end credits who uses the Force to grab his broom.

Nope. She’s Palpatine. And the kid with the broom is forgotten.

Has the “Star Wars” saga become Palpatine’s now? He showed up in the second film, “The Empire Strikes back,” dominated the third, dominated the shitty prequels, and is resurrected here for its finale. Three generations of good guys (Obi-wan, Luke, Rey) battled his bad-guy surrogates (Anakin, Darth, Snoke, Kylo) before having to confront him—the true power. He’s like the Mitch McConnell of this galaxy. Cackle and all.

Palpatine seemed to die at the end of “Return of the Jedi”—tossed over the railing by Darth Vader in one of the worst edited scenes in movie history—but this is “Star Wars” so no one ever dies. Except Palpatine didn’t just survive in astral form as Obi-wan, Yoda and Luke did; he survived in corporeal form. He says the Dark Side is “a pathway to many abilities some consider to be... unnatural,” and I guess this is one of them. A few other questions: How did he wind up on Exegol if he’s unable to move? And if it’s an uncharted planet, how did it get named? Why do wayfinders help you find it, who created them, and why do just two exist? And how, physically impaired on this uncharted planet, does Palpatine secretly create the greatest armada of star destroyers the galaxy has ever seen?

A few more. When did the Force begin to heal people’s wounds? Never seen that before. And Rey can just lift her hand to the sky and bring down a spacecraft? I remember when Luke had trouble summoning his light saber on Hoth. Was he a piker or something? In the prequels George Lucas tried to take away the magic of the Force by reducing it to midi-chlorians but Abrams wants to make it like Doug Henning magic: It can do anything.

Where have you gone, Bail Organa
We first see Kylo Ren (Adam Driver) cutting through armies to get to Palpatine, his true lord, and we first see Rey sitting in a midair lotus position trying to summon the spirit of the Jedis who came before her. He succeeds, she fails. Why? Because it’s the beginning of the movie? And she succeeds in the end because it’s the end of the movie? Did she learn something in the interim? Or were the other Jedis not paying attention before? Hard of hearing, we are, hmm?

Then the roller coaster begins. Searching for a thing (the wayfinder), with the bad guys hot on their tail (Kylo and the Knights of Ren), the good guys zip to this or that planet, encounter old allies (Lando/Billy Dee Williams) and local obstacles (quicksand), escape, get separated, assume someone is dead (Chewie), infiltrate the bad guys’ ship, blast Stormtroopers, nearly get blasted, escape by the skin of their teeth. Along the way, the hero learns who she really is. This intergalactic scavenger hunt leads to the finale, in which, while outnumbered rebel forces take on the spaceships of the Empire, Jedi and Sith battle for the soul of the galaxy

Within this familiar storyline, what worked? For me, C3PO (Anthony Daniels), who has most of the film’s funny lines; the remains of the second Death Star on Kef Bir, reminding us that the past isn’t dead (it isn’t even past); and Kylo/Ben’s shrug after reacquiring his light saber during battle with the Knights of Ren. Loved that bit.

But the new “Star Wars” is still weighted down by its predecessors. Lando, Leia, Luke and Han all make appearances. Our leads aren’t given enough room, or—save Rey and Ren—a reason to be. In the original trilogy, when Luke went off with Yoda, Han and Leia made up the love story. Here, Rey and Ren are the love story. So where does that leave Poe (Oscar Isaac) and Finn? Some fans wanted them to be a love story, too, but Abrams went the opposite route by creating Zorii Bliss (Keri Russell) for Poe and Jannah (Naomi Ackie) for Finn. So much for fan service. Those two are basically our only new characters in the movie, and neither is particularly memorable.

That’s an interesting experiment, actually: What memorable characters are introduced in each “Star Wars” movie? In the first we get Luke, Han, Leia, Chewbacca, C3PO, R2D2, Darth Vader, and Obi-wan Kenobi. That’s our whole universe right there. And in the sequel they added Yoda, Palpatine, Lando, and Boba Fett; and in the sequel to that, Jabba, Akbar, and the Ewoks. OK, Ewoks. But still a good run.

The prequels were horrible at this. Most of the new characters were dull (Qui-Gon, Padme, Mace Windu), and if anyone was memorable it was for all the wrong reasons (Jar-Jar Binks).  And the sequels added no one. I mean, no one. Apologies to all the Sen. Bail Organa fans out there.

That’s why “Force Awakens” was so exciting. It injected fun, new characters into the mix: Rey, Kylo, Finn, Poe, BB8, Maz Kanata and Snoke. Sure, they were derivative, but they popped. Then the sequel undercut them. In “Last Jedi,” newbie Rose Tico outperformed Finn while Vice Admiral Holdo (Laura Dern) outthought Poe. Is that why Zorii and Jannah were added here? To support rather than undercut? Still didn’t work. The bros had such promise four years ago but it feels like it mostly went unfulfilled. Poe winds up “leading the fleet” (yawn) while Finn is tossed the sop of “Force Sensitivity” so he has something to do.

I guess General Pryde is a new character, too, but he’s mostly memorable for being played by Richard E. Grant. The Knights of Ren could’ve been memorable if given more screentime. They could’ve been like the super-posse in “Butch Cassidy.” Instead, they barely register.

Exit through the gift shop
You know what this long saga has never been able to do well—except for right at the beginning? Show the appeal of the Dark Side. Yes, Darth Vader emerged through the smoke as his theme music thundered on the soundtrack, and later in meetings he choked out dissent; all that was cool. For two movies, we got it. Then Palpatine is revealed as the true power and everyone went “Yuck.” He’s constantly extending a grizzled claw to young Jedis and is shocked when they don’t take it. The Dark Side should feel like a clean surge of anger; it should feel like revenge or even justice. I mean, c’mon. So much depends on whether young Jedis (Ani, Luke, Rey) will be enticed by the Dark Side, so at least make it a little enticing. Instead they just make it dark.

Is this the end then? Nah, there’s still money to be made. But based on box-office receipts, interest is waning. I’d move Abrams off this; I’d get someone else to shepherd it into a new age. They need new blood both behind the scenes and on the screen. And the characters they have on screen should have a better reason for being.

Who is Rey? For most of her life, she lived a lie (a nobody from nowhere), and as soon as she found the truth she retreated into another lie (“Rey Skywalker”). Is that good? Start there. See if there are consequences—for her and for us. For nine movies, our various heroes have been pawns in Palpatine’s games. What happens when your common enemy goes? What happens when the roller coaster ride stops?