What’s your favorite moment? Mine is the lightsaber lying in the snow and Kylo Ren (Adam Driver) trying to beckon it with the Force, and struggling, and confused by the struggling, but finally the lightsaber breaks free and flies towards him—and, whoops, past him—and into the hand of Rey (Daisy Ridley), who stares at it in wonder, and then takes up the Jedi pose as the music wells. I had tears in my eyes after that.

And I knew it was going to happen. That’s the thing. It was totally telegraphed. But still. Tears.

A lot of the movie was totally telegraphed. Certainly (and again, please accept this spoiler alert) the death of Han Solo (Harrison Ford) at the hands of his son, Kylo Ren, on the walkway over the giant chasm in the heart of the Starkiller Base, which is like the Death Star to the 100th power, as all of the principle characters, and I mean all of them, Chewie and Rey and Finn (John Boyega), watch in horror. That scene did nothing for me. Although, I have to admit, after Han is cut by the lightsaber but before he falls forever into the void, I liked it when he caresses his son’s cheek. It’s not only a tender gesture but a kind of exquisite revenge. Kylo, after all, is fighting to stay on the dark side, and, for him, love hurts. “I want to be free of this pain,” he says, right before he sticks it in. So Han, in a way, sticks it back. 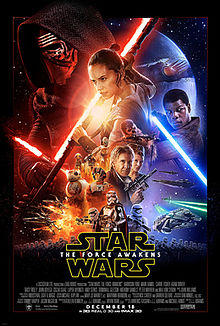 But most of my favorite moments in “Star Wars: The Force Awakens” involve Rey. Ridley lights up the screen with the force of her face, and the humanity in it. I think I’ve got a crush.

Here’s the problem everyone’s identified: She’s a bit of a quick study. What’s the first time we see Luke Skywalker summon anything with the power of the Force? Is it his lightsaber in the snow, as he hangs upside down in the wampa’s cave in “The Empire Strikes Back”? That’s after how much training and how many months/years? Rey, she does it after, what, a day or two? And with no training? And with a Jedi master also trying to summon it away from her? But I get why Disney and writer-director J.J. Abrams went this route. Our attention spans are shorter than they were a long time ago, in movie theaters far, far away.

Rey of New Hope
So Rey is the key to it all. She’s the awakening of the title, the ray of hope, the big question mark. “Who’s the girl?” they keep asking in the movie. “Yeah, who is she?” we keep asking after the movie. Is she a Skywalker? Luke’s daughter? Probably not. If I had to guess, I’d guess Kenobi. She avoids detection in the Starkiller Base the way Obi-wan did in the Death Star.

Here’s what we know about her:

I do hope there’s not much of a connection to the Skywalkers. The “Star Wars” universe collapses in on itself way too often; way too many roads lead back to Anakin. I’d rather this one didn’t. Plus, if it was Luke, then he was the one who abandoned her. Which would be a total dick move.

Instead, he simply abandons the galaxy. First he saves it (in “The Return of the Jedi”); then, at some point, he trains young Jedis/Padowans but Kylo Ren, son of Han and Leia, turns to the Dark Side, like his grandfather (Darth Vader, yo), and slaughters the rest of the students. We see a flash of the massacre when Rey touches Luke’s lightsaber in Maz’s cantina basement. This is why Luke leaves to a distant part of the galaxy. And that’s why the Empire strikes back (this time as the “First Order”), and we get our oppressive regime again along with our embattled underdogs again. It’s as if the Ewoks never danced.

So it’s odd that Supreme Leader Snoke (Andy Serkis), this movie’s Emperor, is desperate to find the map to Luke, hidden in the droid BB8. “If Skywalker returns,” he says, “a new Jedi will rise.” Really? Didn’t he already try that? And didn’t it lead to a massacre? So what are you afraid of?

But that’s the plot device that drives the movie, and, yeah, the movie is similar to “Star Wars IV: A New Hope.” Way similar. Intel is hidden in a droid (BB8), who winds up on a desert planet and is befriended by an orphan who is powerful in the Force (Rey), along with a dude who keeps trying to get away from the Rebellion even as he keeps returning to it (Finn). We’ve seen this story before. There’s just so many similarities it’s not worth going into.

So why does it work?

Principessa
One word: personality. The new characters are fun, and the actors who play them exude charm and humanity. Plus the dialogue works. Imagine that: the dialogue. In a Star Wars movie. Take that, prequels!

But you know who gets short shrift here? Leia. Again.

After “Jedi,” anyone with a mind went, “Wait, weren’t they twins? So why is it all about Luke? Why is Leia in a bikini and chained to Jabba the Hutt when she too has the power of the Force?” Rey, in this movie, is a way to restore some (gender) balance to the Force. Which she does. But Leia still gets short shrift. She’s a general now, rather than a mere princess, but what does she really do? Has a few scenes with Han. Nags him a bit. About their son. Even this is wrong. Somehow it’s up to Han to turn Kylo Ren around when it’s from Leia that he inherited the Force, and it’s Leia’s father he’s obsessed with. So why doesn’t she go after him? Probably because we’d rather see Han/Harrison in action than Leia/Carrie. But from their perspective it makes no sense.

I’ll still take it. “Star Wars: The Force Awakens” is what the Star Wars universe is supposed to be: fun. We get desert planets, forest planets, ice planets, water planets. The good guys win, the bad guys stay in power (for the next movie), and my man Luke makes an appearance at the 11th hour and 59th minute. Better, they give us new blood: Rey and Finn and BB8 and Poe, and you’re confident these guys will carry the mantle. You hope the filmmakers realize that. You hope the sequels won’t be so derivative. You hope Abrams and Disney know that the belonging we seek is not behind us, it’s ahead.