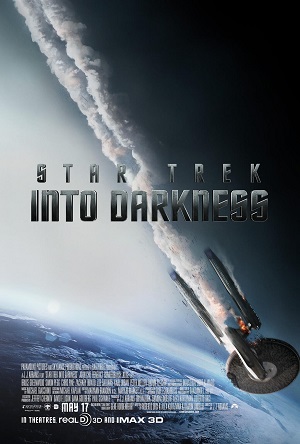 But my main thought was of the roller coaster. Seriously, how many Spielbergian, breathless, everything-going-wrong-and-has-to-go-right-at-the-last-second moments are we going to have?

If the first J.J. Abrams-led “Star Trek” reboot reminded me of “Star Wars,” this one reminds me of “Raiders of the Lost Ark.” Even the cold open gives us our hero, Capt. James T. Kirk (Chris Pine), carrying a kind of idol while running from natives with spears. Meanwhile, Mr. Spock (Zachary Quinto) is being lowered into a volcano to detonate a cold-fusion device, and winds up trapped there, as lava laps up all around him. Can Kirk and Spock be saved? Of course they can. Kirk gives up the idol (a kind of map?), which the natives bow before, and he and Dr. McCoy (Karl Urban) jump off a cliff and swim to the U.S.S. Enterprise, which is hiding underwater, in salt water, against the express wishes of its chief engineer, Scotty (Simon Pegg). At which point, violating the Prime Directive, the Enterprise arises, to the amazed eyes of the indigenous people, which allows Kirk and company to use the transporter to beam Spock, whose protective suit is smoking, back to the Enterprise just in time. All good!

Not really. Even before Kirk is temporarily relieved of command for violating the Prime Directive (by revealing the Enterprise), and Spock temporarily reassigned to the U.S.S. Bradbury for doing same (by preventing the volcano from exploding), we have our own questions:

It’s always a bad sign when one of the characters in a movie annunciates the absurdity of what is going on in the movie—as Scotty does here. “Do you have any idea,” he tells Kirk, “how ridiculous it is to leave a starship on the bottom of the ocean?” Preach it, Montgomery.

And that’s just the first, breathless, Spielbergian moment. Others include: 1) the chase from, and capture by, the Klingons; 2) shooting Kirk and Khan from one starship to the next through a field of debris while Scotty is being held at phaser-point; 3) Kirk running and climbing and battling radioactivity to get the ship’s engines online before the Enterprise burns up in the Earth’s atmosphere; 4) Spock chasing Khan all over San Francisco.

All of these scenes are well-done but they’re pointless. The point of the roller coaster is to not think about anything but the roller coaster, which is what most moviegoers want, but it isn’t what “Star Trek” fans want. They want to think. They want it to make sense, and have meaning, and maybe even some poignancy. They want Kirk and Spock to be friends, sure, but not deep friends, not best buddies, before they’ve barely had an adventure together. Episodic TV allows you to build on friendship in a way that movies, even with their interminable sequels, do not.

The movie, too, is basically a critique of the Bush administration after 9/11. Because we were attacked by one group (al Qaeda), we started a war with another (Iraq). Because Earth was attacked by one group (futuristic Romulans), Admiral Marcus (Peter Weller) wants to start a war with another (the Klingons). It’s up to Kirk, giving a speech before Star Fleet at the end, to warn everyone, mostly us, about the dangers inherent in revenge.

But the rest? Uhura (Zoe Saldana), despite the Klingon language skills, is wasted, spending most of her time bitching about Spock acting like Spock. And do we get any rationale for why Spock is doing what he’s doing? Why the relationship with Uhura, and why the anger at Khan, and why does he need Uhura to stop him from killing Khan? Is his half-human side that strong in this alternative universe? And is it because the planet Vulcan is no more? And what of that? How many members of the Vulcan species are left? Wouldn’t this small fact alter his trajectory a bit, get him off the Enterprise maybe, doing something else? Wouldn’t it give him a different girlfriend? (No offense, Zoe.) Doesn’t it make sense for Spock to want to propagate his species now that they’re nearly extinct? Or at least consider doing so? Or at least talk about it with someone?

What was it like for Kirk to die as long as he died? Spock, mind-melding with a dying Christopher Pike (Bruce Greenwood), said he felt, from Pike, four things: anger, confusion, loneliness and fear. No calm? No moving toward the light? Can Kirk confirm? Isn’t that the “Darkness” in the title? Can someone talk about any of this in a meaningful way?

Of course not. That would slow down the roller coaster ride and we can’t have that. “Star Trek” fans, who want to think, are few, and popcorn crunchers, who just want the roller-coaster ride, are many. And as Mr. Spock told us here and in the original “Star Trek II,” and as J.J. Abrams and Paramount executives and all of the numbers-crunchers in Hollywood surely believe, the needs of the many outweigh the needs of the few.