When the announcement dropped a few years back that they were rebooting Spider-Man again—just 15 years after the original and only five years after the first reboot—I mostly shook my head. Yeah, congrats guys, Spidey’s part of the MCU* now. But another one? So soon? I mean, I don’t know if I can watch Uncle Ben die a third time.

Just how many ways can you differentiate yourself from canon? The 2012 reboot tried by:

Did Pete even catch the Burglar in the first reboot? And now another one? Good luck.

It’s not exactly news that they hit it out of the park.

Avenger No More!
“Homecoming” works because it goes younger, nerdier, funnier and more diverse. Aunt May (Marisa Tomei) is young and hot, while Pete (Tom Holland) can’t drive a car and can barely talk to girls. He’s 15. 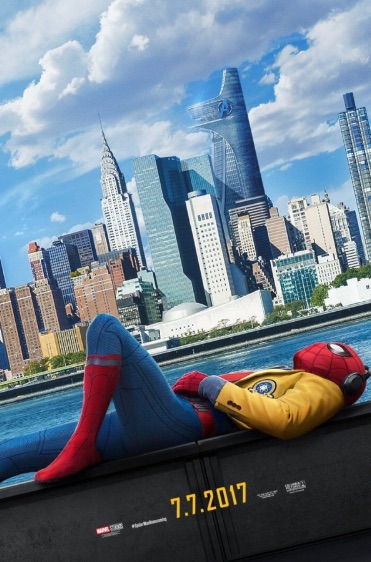 We get such Ditko-era stalwarts as Liz (Laura Harrier), Flash (Tony Revolori), Ned (Jacob Batalon), and M.J. (Zendaya), but reimagined in different ways. Flash, for example, is a verbal rather than a physical bully, while Ned is Pete’s Legos-playing best friend who discovers his secret identity. All of these supporting parts, by the way, are played by people of color. It doesn’t matter (in their world), and shouldn’t matter (in ours), but it does. It’s Marvel living up to James Baldwin’s line: “The world is white no longer, and it will never be white again.”

“Homecoming” also works because it does two things most superhero movies don’t do.

First, you also get a real sense of how tough it is to put the “super” in “superhero.” Not emotionally, as in “Oh no, I’m a giant rock creature and no one will ever love me again,” but in just getting from place to place. Sure, Pete’s spider-powers allow him to scale the Washington Monument, but it’s not effortless—any more than you or I doing wind-sprints up a hill would be effortless. He runs out of breath; he all but clutches his side. In Queens, where he lives, there are no tall buildings to web-sling on to, and, at one point, he winds up running through backyards like Ferris Bueller. Plus crimes don’t just happen, wah-lah, in front of you. He nabs a bike thief but can’t find the bike’s owner. At one point, with nothing to do, he helps an old lady with directions. It’s all rather pedestrian. He’s a super kid trying to make his way in a world of super adults, and frequently coming up short.

The movie also answers the question David Mamet says every playwright/screenwriter needs to ask: What does the guy want? This is a rarity in superhero movies. Generally, once the hero becomes super, they have no motivation other than a grand one (stopping crime). Supervillains are the ones with schemes. Heroes are just trying to stem the tide. They’re reactive.

Not here. Pete wants something: He’s desperate to join the Avengers. Tony Stark (Robert Downey, Jr.) brought him on board for “Civil War” but in the first minutes of this one he just plunks him back into his regular world with barely a how-do-you-do. Pete goes from stealing Captain America’s shield to watching dull Captain America PSAs with his classmates (a great, recurring gag). So of course he’s chafing; of course he wants to be in the center of things again. But Tony is a distant, dismissive father. He tells him to buckle down, do his schoolwork, and be a friendly neighborhood Spider-Man. Basically he feels Pete is too young for the Avengers.

But it’s not all on him. Tony Stark is not only distant father but distant oligarch. He’s above it all (literally) and too busy to clean up his own messes. He’s kind of an ass. At one point he says to Pete, “If you’re nothing without the suit, then you shouldn’t have it.” Um, dude? Aren’t you all suit? Stark’s mere presence creates envy but his sloppiness creates opportunities for destruction.

Hell, he’s the reason we get our supervillain.

The Vulture’s Prey!
Adrian Toomes, a.k.a., The Vulture (Michael Keaton), is one of Spidey’s oldest nemeses** but previously ignored onscreen. I can imagine the meetings with Hollywood suits: “Wait, this bald guy with the buck teeth and feathers? Pass.”

Well, the feathers have been replaced by metal and powered by alien tech, and Keaton makes him truly terrifying: a working-class hero with a giant (and not unjustified) chip on his shoulder. Eight years earlier, Toomes’ salvage company was hired to clean up in the wake of the alien attack in “The Avengers”; but then the feds swooped in, roped things off, and dismissed him. He was left with debts and doomed to bankruptcy ... except for the truck full of debris and alien tech at his warehouse.

That cache leads to the creation of three Spidey supervillains: Vulture,  Shocker (Logan Marshall-Green; Bookem Woodbine), and the not-so-terrible Tinkerer (Michael Chernus)***. Initially, Toomes just wants to get his and provide for his family. They rob ATMs and sell dangerous weaponry on the black market. But increasingly he wants revenge—on Tony Stark and the Avengers. He’s the opposite side of the same coin as Pete. Both are fixated on Stark. Pete, fatherless and uncleless, wants his love, while Toomes plots his destruction.

Is that third-act reveal too much? After Pete loses his Stark-manufactured Spidey suit, he focuses on high school and friends and asks his crush, Liz, to the dance. Life is on the upswing. Then Homecoming night he opens her front door and is greeted by her father: Adrian Toomes. It’s a jolt. It’s also one fantastic coincidence: My sworn enemy is the father of the girl I love! It recalls that first Green Goblin reveal****: My sworn enemy is the father of my best friend! And is it me or does that marriage seem ... off? No offense, Mike, but Garcelle Beauvais is a bit above your paygrade. That said, kudos to Keaton’s acting. At one point, he has to pivot from chaperoning dad to malicious super-killer, and he does so naturally and seamlessly.

O, Bitter Victory!
Kudos all around, really. Holland makes an amazing Pete/Spider-Man, Batalon is pitch-perfect comic relief, Michelle/M.J. is great sarcastic sidebar. We get a Spider-Man #33 homage: Spidey, exhausted and trapped by an enormous weight, overcoming it to save the day. (I always loved that issue.) “Homecoming” has a 133-minute runtime but it zips. I was never bored. And I’m frequently bored at these things.

The final battle involves a planeload of Stark Industries tech, which Vulture hijacks because he’s trying to get Iron Man’s attention. He has to settle for Spider-Man’s. It’s almost poignant. Both of our leads are wallflowers at the dance, unable to get the homecoming queen's attention. It’s They Might Be Giants: No one in the world ever gets what they want, and that is beautiful.