Based on reviews (37% on Rotten Tomatoes), box office ($45.8 million, a 60% drop from Amy Schumer’s previous film), and word-of-mouth (crickets), not to mention the awful double entendre of the title, I expected “Snatched” to suuuuuuuuck.

It doesn’t. Mind you, it’s not good, but it’s not bottom-of-the-barrel.

It’s good enough, in fact, to make me wonder why it didn’t do better. And I hate myself for the answer I’m about to give: I think it has a little something to do with Goldie Hawn’s face.

It’s not that she looks old; that would be fine. She just looks like she’s had too much plastic surgery. 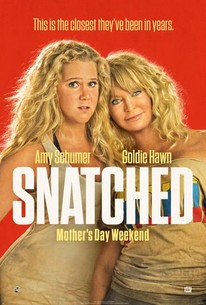 Schumer plays a classic Schumer character, a spoiled, solipsistic American girl named Emily Middleton. We first see her talking endlessly to a retailing clothing clerk about an upcoming trip to Ecuador with her boyfriend—who’s in a rock band. Except the clerk turns out to be the customer, Emily is the clerk, and a second later she’s fired for being, you know, awful. Then her boyfriend (Randall Park, “VEEP”) dumps her for pretty much the same reason. Schumer opens the movie like a classic Bill Murray character—losing everything in the first five minutes—except she’s less funny, and less endearing, doing it. It was always a neat trick how Murray managed it.

Anyway, the plane tickets are nonrefundable, nobody likes her, and that’s why she winds up traveling with her mom, Linda (Hawn), who is in her 60s, lives alone with cats, and assumes all strangers are potential criminals.

I have to admit: This seems like great casting. One era’s kookie blonde giving birth to the next. I just wish Goldie had let herself age as ungracefully as the rest of us. Instead, she went the Hollywood route, and her face has that stretched, vaguely platypus look. They also have her playing against type: instead of dingbatty, wide-eyed and inviting, she’s suspicious and closed off. (Or maybe that’s what happens to the wide-eyed and inviting over time?) Either way, she’s the straight person here.

In Quito, Ecuador’s capital, Emily just wants to drink and meet a cute guy, while Linda assumes the worst. Both get what they want. The cute guy takes them on an excursion and they’re rammed by a white van and kidnapped by Colombians. For ransom? Doesn't anyone know they have no money? But at least it answers the question: Why Ecuador? Initially I thought it was because they’d wind up in the Galapagos.

Deepest cuts
A few things I liked: In their various attempts to escape the clutches of Hector Morgado (Óscar Jaenada, who played Catinflas in a 2014 Mexican biopic), they accidently kill his henchmen ... who turn out to be 1) his nephew, and 2) his only son. The neophytes who—oops—cause the deepest cuts always makes me laugh. I also like the interplay between Linda’s frenetic, spoiled, stay-at-home son, Jeffrey (Ike Barinholtz, “The Mindy Project”), and the laconic, career State Dept. official Morgan Russell (Bashir Salahuddin). Oh, and all the various saviors/rescuers that aren’t: Christopher Meloni’s jungle adventurer; the lesbian team-up of Wanda Sykes and Joan Cusack, who make the leap but leave Emily hanging.

There are laughs in “Snatched.” I laughed. But not enough.