“This rotten town soils everybody,” Nancy (Jessica Alba) says at the end of “Sin City: A Dame to Kill For.”

This rotten movie, too.

Is anyone still jazzed by this stuff? Does anyone think writer/co-director/creator Frank Miller isn’t a sad, sad man? Someone channeling Mickey Spillane through the Tobe Hooper grinder? A creepy, morally bankrupt, reactionary idiot?

Dwight: She’s playing it for all its worth. And it’s worth plenty.

His female characters are still argued about in the most infantile fashion:

Roark: She was a whore and not a very good one.
Johnny: She was an angel.

To recap: Sin City is a corrupt town where, if you’re a good man, you drink hard liquor every night, watch Nancy do her non-strip striptease, then go out and bust heads. 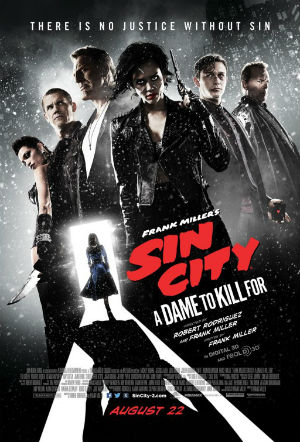 Preferably the heads of bad guys. You know: frat boys who light winos on fire or the hired bodyguards of the powerful and corrupt. You get to do what you want with these people because they’re bad. You get to torture people and feel moral about it. It’s like America after 9/11.

If you’re a good woman you’re most likely a prostitute. You wear lingerie and maybe a mask. Maybe it’s a Zorro mask. You tote a machine gun or a crossbow or a samurai blade, and you slice up the bad guys, often with the good guys by your side. And that’s about it for you.

Worse than the first
The first “Sin City” (2005) was morally reprehensible but at least it kinda held together. At least the motivations and actions of its cartoonish figures kinda matched.

So Johnny (Joseph Gordon Levitt) is a lucky, coin-flipping son of a gun who decides to play poker with the most powerful man in the state, Senator Roark (Powers Boothe). Everyone warns him off. Everyone tells him you don’t beat Roark at poker and get away with it. But he does it anyway. Why? Because he’s one of Roark’s bastard children. Does he think this matters to Roark? It doesn’t. So he doesn’t get away with it. He’s beaten, shot, and his lucky hand is mangled, and his lucky charm, an innocent waitress named Marcie (Julia Garner), is killed. So he plots revenge. What is this revenge? He plays more poker with Roark, loses several hands (on purpose?), then wins big at the end. Then he tells Roark he’s a loser, and he’ll always know in his head that he’s a loser, because he, Johnny, beat him twice. Then Roark shoots Johnny in the head. That’s the end of that. Apparently revenge is a dish best smooshed into your own face.

In our second story, private dick Dwight (previously Clive Owen, now Josh Brolin) is revisited by the Love of his Life, Ava (Eva Green), the dame of the title. She’s watched over by a giant of a chauffeur, Manute (Dennis Haysbert), who is apparently the watchdog of her new, rich husband, Damien Lord (Marton Csokas). Is her husband holding her captive? Does he beat her? She implies as much. So after trying to rescue her and getting pummeled by Manute, Dwight returns with Sin City perennial Marv (Mickey Rourke), who relieves Manute of one of his eyes while Dwight relieves Damien Lord of his life. Except, ha ha, Ava is a femme fatale who is playing Dwight for a sap. She’s now a rich, powerful woman, and she sics the cops on Dwight, who holes up in Old Town with the lingerie-clad, sword-wielding prostitutes. Dwight spends this standoff getting plastic surgery, Ava spends it seducing the cop on the case (Christopher Meloni), who becomes so distraught he kills his friend (Jeremy Piven) and then himself. The point of this subplot? Who knows? Eventually Ava hires a Texas killer who turns out to be Dwight, post-plastic surgery, but everyone recognizes him. Then there’s a final big battle, with the lingerie-clad prostitutes vs. the hired bodyguards, and Ava is finally relieved of her life. And that’s the end of that.

Satisfied? Of course not. And it gets worse.

Worst for last
That’s the thing about “Sin City: A Dame to Die For.” Sex + violence isn’t supposed to equal boring but it does here. The violence is cartoonish, the sex puerile and voyeuristic. The dweebs it’s aimed at will probably find it boring. And Miller and co-director Robert Rodriguez save the worst for last.

So Nancy is the girl who was abducted by Roark’s pedophilic son in the first movie, only to be saved by Det. Hartigan (Bruce Willis), only to grow up to be the best stripper at the best dive bar in Sin City; and she, like Johnny, plots her revenge against Roark. At one point, dancing her cowgirl dance, she has Roark in her sights, but she can’t pull the trigger. Alas. So she has to drink, and emote, and dance some more raw, angry, sexually absurd dances, before she cuts up her own face and tells Marv that it was Roark who did it, which leads she and Marv to attack Roark’s fortress the way Dwight and Marv attacked the Lord fortress, and there’s another final showdown, this time between Nancy and Roark, the stripper and the Senator. But does she have the guts to finally go through with it? Moot point. He shoots first, her gun is inches away, and he’s about to take the final deadly shot when, in the mirror, he sees the ghost of Hartigan, who’s been following after Nancy for most of the movie, giving her bad advice she can’t hear; but his appearance here, in the mirror, gives her the time to grab her gun and blam blam blow away the baddest of the bad guys. After that, she visits Hartigan’s grave and says the last line and the lights come up and we all shuffle out of the theater feeling as soiled as Sin City.

I’d want revenge on Frank Miller if I didn’t feel so sorry for the man. We get to leave Sin City after 100 minutes, but he invented it. He cared enough about it to put it on paper and then film. It will soil itself in his head forever.