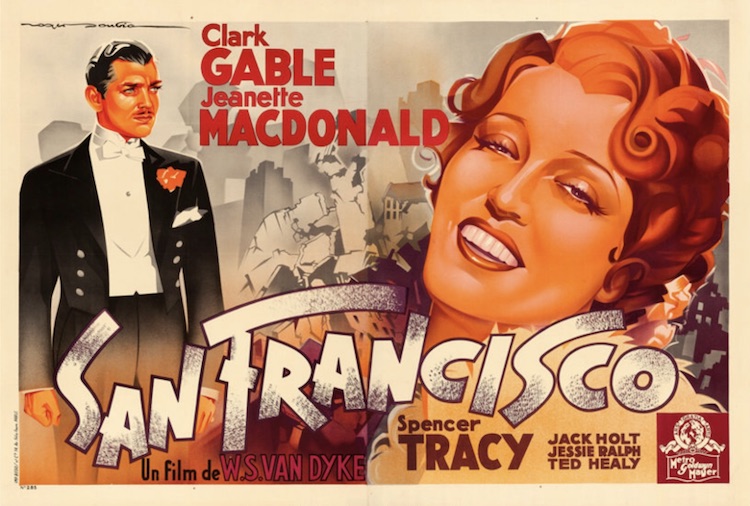 “San Francisco,” which garnered six Oscar nominations, including picture, director, story and actor, and was the No. 2 box-office hit of 1936, is really two stories. One is aimed at men and was seen a lot in the 1930s. The other is aimed at women and is the most successful movie framework of all time.

The story aimed at men is this: two childhood pals wind up on opposite sides of the law. That’s “Manhattan Melodrama,” “Dead End,” and “Angels with Dirty Faces.” Here, Blackie Norton (Clark Gable), who runs the disreputable Paradise saloon along the Barbary Coast in 1906 San Francisco, is still good friends with Father Tim Mullin (Spencer Tracy), the original fightin’ priest, who knows Blackie’s got a good heart even if he doesn’t believe in all that God hooey. They spar at the local gym and eat chop suey together. Blackie donates an organ—the musical kind—to Father Tim’s church. They’re just on opposite sides of the Big Question.

The most successful movie framework of all time is this: a woman has to choose between two men against a backdrop of historical tragedy. That’s “Gone with the Wind,” “The Sound of Music,” and “Titanic.” (Also, in more cartoonish form, the “Twilight” movies, “Hunger Games” and “Frozen.”) Here, Mary Blake (Jeanette MacDonald) must choose between Blackie and Jack Burley (Jack Holt) against the backdrop of the 1906 San Francisco earthquake. If she goes with the man she loves (Gable, of course), she’ll get the career she doesn’t want (singing in his saloon). If she goes with the other guy, she gets her dream job (the Tivoli Opera House), plus respectability (Nob Hill money), plus a straight-talking mother-in-law (Jessie Ralph, who’s fantastic). So every instinct is against choosing Gable. But then there’s Gable. As a result, we wind up with a lot of tortured looks and flip-flopping from MacDonald.

You know what decides for her? The earthquake. It kills Jack Burley, destroys the Paradise Saloon and helps Blackie find God. Think about that: It gets rid of the man she doesn’t want and the place she doesn’t want to work. And the big problem with the man she loves? His Godlessness? Solved. Modern smart weaponry should be so precise.

1930s CGI
Question: Is the earthquake also God’s judgment on the wickedness of turn-of-the-century San Francisco? Early on, Father Tim warns Mary, a parson’s daughter from Benson, Colorado, about her new home:

You’re in probably the wickedest, most corrupt, most Godless city in America. Sometimes it frightens me. I wonder what the end’s going to be.

And the end was the earthquake. Because of the city’s licentiousness? Or maybe God just couldn’t stand one more rendition of “San Francisco …open your golden gate/ You’ll let nobody wait outside your door…”

You know what I liked about the earthquake? It comes out of nowhere. For most of the movie, the drama is elsewhere. Not just in the decisions Mary doesn’t make but in the battles Blackie fights.

The movie opens with a fire on the Barbary Coast and a demand from local leaders for fire-safety reform. So they ask Blackie to run for supervisor and he seems a natural candidate. Jack Burley, who owns those fire-trap tenements on the coast, objects, and the two men battle for both Mary and power. At one point, to fill his political coffers, Blackie is hoping to win the “Chicken’s Ball” talent show, as his saloon usually does, with its $10k prize, but that very night he’s raided by cops at the behest of Burley. At the last instant, though, Mary—who at this point is Burley’s betrothed—agrees to sing for the Paradise. She goes with “San Francisco,” of course, and wins. Except Blackie’s not having it. He throws the trophy on the ground and stomps off. Mary is upset. Jack Burley is leading her outside when the earthquake hits. And all that drama about Blackie running for supervisor gets lost in the cracks and fissures. We don’t hear one thing about it again. It’s like Marion Crane’s machinations before she shows up at the Bates Motel. Which feels like life to me. What we think is the story isn’t necessarily the story.

I expected to be disappointed by the quake. I mean, it’s nearly 100 years old. How good could the special effects be? Answer: pretty damned good. Audiences at the time must’ve been wowed. Example: There’s a brilliant scene where Blackie, dazed, stumbles through the streets amid the aftershocks; and then the earth cracks open, one person falls to his death, another nearly does the same, but, even as the slab of earth he’s standing on heaves upward, and a water main below bursts, Blackie pulls the man out. It’s just this constantly moving chaos. I guess if there’s one thing people in LA know, it’s what an earthquake feels like.

I like the first meeting, or non-meeting, between Blackie and Mary, too. They’re on a busy street, New Year’s Eve, and she’s walking several paces ahead of him, oblivious to him as he is to her. He’s faster but keeps getting stopped to greet friends and acquaintances. Eventually he catches up … and passes her without a glance, kind of annoyed that she’s in his way. Good bit.

Her destination turns out to be his, the Paradise, where she wants to audition for his stage show. In his office we get the following exchange:

So out of sight of the camera, she hoists her dress demurely. It would be interesting to compare this scene with Margot Robbie’s dress-hoisting audition in “Bombshell,” about sexual harassment at Fox News. Why is the Fox scene icky and this not? Because Fox president Roger Ailes tells her to keep going, gets a sad, sexual thrill out of it, and looks like Roger Ailes/Jabba the Hutt? Yes. Meanwhile, for Blackie is all about business: Will her legs draw crowds? Plus he looks like Clark Gable.

Perishing with a cry
Is this my first Jeannette MacDonald movie? She’s beautiful but not a great actress. I couldn’t even tell if she liked Gable—the actors apparently didn’t like each other at all—so Gable has to underline it for us: “How does it feel,” he says, as she remains stone-faced after his umpteenth advance, “to feel like a woman and be afraid of of it?” Ah, so that’s what’s going on. I thought he was just a creep.

Overall, there’s too much melodrama for me in “San Francisco,” but it has its moments—like the non-meet cute. I also like the opera scene. Blackie goes to the Tivoli Opera House with his right-hand man “Babe” (Harold Huber, another great character actor of the period) to stop her debut because she’s under contract to him; but he winds up so amazed by her singing, and by the opera itself, that he lets it ride. It’s the lowbrow guy getting culture. That was the MGM way, wasn’t it? They were the Tiffany of movie studios and Gable was their Warner Bros. guy. But he had to learn.

The movie, as mentioned, is the two childhood pals story, and the woman choosing between two men against a backdrop of historical tragedy story. But is it something else? This is the opening title card:

San Francisco—guardian of the Golden Gate—stands today a queen among sea-ports: industrious, mature, respectable. But perhaps she dreams of the queen and city she was—splendid and sensuous, vulgar and magnificent—that perished suddenly with a cry still heard in the hearts of those who knew her, at exactly:

“San Francisco” was released two years after the Production Code Administration under Joseph Breen ended the glorious “Forbidden Hollywood” era of skin and sin. So is 1906 San Francisco a kind of stand-in for Forbidden Hollywood itself? Maybe even MGM, with its highbrow pretensions, misses the studio she was—splendid and sensuous, vulgar and magnificent.