He waited too long.

Principal shooting on “Rules Don’t Apply” took place in 2014, but writer-director Warren Beatty kept tinkering with it throughout 2015, and the movie didn’t open until November 23, 2016—two weeks and a day after Donald Trump was elected president of the United States. And these are the first words the still-shellshocked citizens of the U.S. got to see on screen:

“Never check an interesting fact.”
— Howard Hughes
(names and dates have been changed)

What’s supposed to be a sly wink at the audience, something to make us laugh at the chicanery of it all—and maybe even recall one of the most famous lines in movie history: “When the legend becomes fact ... print the legend,” from John Ford’s “The Man Who Shot Liberty Valance”—instead, post-Trump, comes off as a kind of horror about what we’ve allowed everyone to get away with, the truth-less, factcheck-less world in which we now spin. It immediately sets the wrong tone. 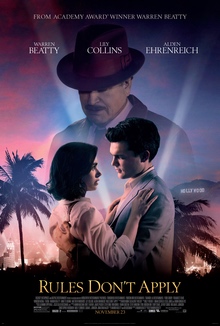 Then it get worse.

Here’s the story as I see it: In 1958, two kids fall in love but Howard Hughes (Beatty) gets in the way. She gets pregnant (by Hughes), he stays employed (by Hughes), and then six years later, in Acapulco, they rally ’round the old man enough that he’s able to rise up from his dementia and beat back a charlatan autobiographer. Yay! Then boy and girl go off into the sunset—with Hughes’ now 5-year-old kid in tow—even as the old man sinks back into silence and darkness.

The girl is Marla Mabrey (Lily Collins) a devout Baptist and the “Apple Blossom Queen” of Virginia, who arrives in Hollywood in 1958 with her suspicious, demanding mother, Lucy (Annette Bening, wasted), ready to take a screen test for the Hughes-produced film “Stella Starlight.” The boy is Frank Forbes (Alden Ehrenreich), a devout Methodist low-level employee of Hughes and wannabe real estate tycoon who drives Marla and 25 other Hughes starlets to and from school, dance lessons, auditions, etc., even as he’s constantly warned by his superior, Levar Mathis (Matthew Broderick), not to get involved with them—and even as Levar does his level best to do just that. To no dramatic effect. Or plot point. Or anything.

There’s a great early shot of, I guess, Sunset Boulevard in 1958, done with, I imagine, lots of CGI, that made me happy. This is what CGI is for, I thought: resurrecting history. There’s also a nice montage of picking up the va-va-voomy starlets, as well as a fascinating moment when the girls get their weekly paychecks via clipboard dropped from a second-floor window like—as Lucy accurately states—a fishing line. But the movie loses itself quickly. The early scenes are rushed through. In one seven-minute stretch, I counted 14 separate scenes—three involving Frank’s visit with his girl and her family back in Fresno, which could’ve been cut altogether. But Beatty keeps them while giving short shrift to the others.

Where’s the emotional resonance? At one point, Lucy is lambasting Frank again from the backseat about how it’s been two weeks and Hughes hasn’t even seen Marla yet, and when is she going to get her screentest, and why isn’t he, Frank, doing something about it? Finally fed up, Fred pulls over, turns, and tells her he’s never seen Mr. Hughes, either. Ah ha! Except we’re already aware of this. Painfully so. The scene might’ve worked, if, say, the point-of-view had been Marla’s throughout, with Hollywood a dreamscape, and the driver mysterious and handsome, and then ... Oh! He’s just like me. He’s just another employee in the dark. Instead, this clunker.

We get a lot of clunkers. There’s a Bobby Darin joke that falls flatter than almost any line I’ve heard. Then it’s repeated 10 minutes later.

It all builds toward finally seeing the reclusive Hughes. She goes first, meeting him in his darkened bungalow at the Beverly Hills hotel, where she anticipates a pass or worse. Instead, he’s a Warren Beatty character: distracted, kooky, harmless. She’s served a TV dinner rather than a sumptuous meal, and sax rather than sex, and when he looms close and points to her chest it’s to talk about the Rayon in her blouse rather than paw at what’s beneath it.

Then it’s his turn, meeting Hughes for 3 a.m. burgers on folding chairs in front of Hughes’ massive airplane, The Hercules—just one of the many Hughes bio bits Beatty tries to pack in. In this six-year period, 1958 to 1963, we get references to Jane Russell’s bra (really from 1943) as well as the faux autobiography (really from 1972). Hughes is in a plane crash, Hughes is testifying before Congress, Hughes exhibits the OCD habits that will undo him. He’s increasingly paranoid that his underlings will declare him mentally incompetent and put him in an institution. Then he learns that if he’s married, he can’t be committed without his wife’s approval. And that sets up the movie’s turning point.

Apparently Beatty first thought of this project back in the 1970s, and if he’d pulled it off earlier, with him in the lead, it might’ve worked. I mean, Hughes in ’58 was relatively young: 53 years old. He was Brad Pitt’s age now. But Beatty at the time of filming? 77. Worse, he was 52 years older than the female lead. Again: Ick. Sorry, Warren, but some rules do apply.

Hughes, scatter-brained and unethical, winds up marrying Jean Peters and escaping to Las Vegas, then Nicaragua, then London. Marla winds up pregnant. She and Frank wind up on the outs because 1) he sees the engagement ring and assumes there’s another guy, 2) she doesn’t tell him about Hughes, 3) he doesn’t figure it out until the 11th hour. Quarter to midnight, more like.

Facts, legend
What a mess. I get the feeling Beatty wants us to cheer as, buoyed by Marla’s sudden reappearance in Acapulco with her son, whom he recognizes as his son, meaning his DNA will continue on and he can live forever (don’t ask), buoyed by this, the clouds in his mind momentarily dissipate, he comes alive again, and he unmasks his biographer—the spurned boyfriend of one of his starlets six years earlier—as a charlatan. But ... he’s still Hughes. All that shit still happened. There’s no Hollywood ending here, but Beatty, or Fox, makes one out of it—right up to the boy chasing after the girl to let her know, finally know, how much she means to him.

You know what would’ve made a better movie? The story of another 1958 ingénue from Virginia, Warren Beatty, landing in Hollywood just as the old studio system was dying; and how he and his generation, via “Bonnie and Clyde” and “The Graduate,” created, for a time, what took its place: Easy Riders, Raging Bulls.

When the legend sucks, print the facts.