“Take It Back” plays over the title credits of “Rocky Balboa,” which is appropriate since that’s what Sylvester Stallone does here. He takes us back 30 years to the days of “Rocky.”

We get Spider Rico again, the first boxer we saw Rocky fight, and Little Marie, the “Screw you, creepo!” girl who didn’t listen to his advice when he walked her home that one night. We see two turtles in Rocky’s room, replacements for Cuff and Link, and instead of running through the Italian market to Bill Conti’s ridiculously uplifting score, Rocky (Stallone) buys produce for his restaurant, Adrian’s, where he acts as gregarious host telling old boxing stories to the patrons. 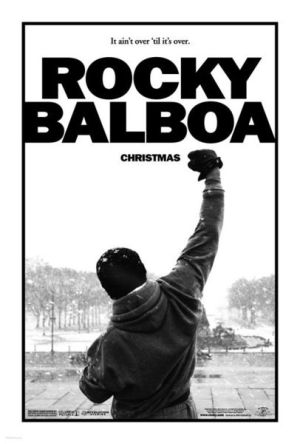 Adrian’s dead now, joining Mickey (“III”) and Apollo (“IV”), which leaves us with Paulie (Burt Young), the one who won't go away. He’s back at the meat plant for most of this movie, and is the complaining chorus as Rocky, on the anniversary of Adrian’s death in 2002 (“woman cancer” Rocky explains to Little Marie), does a nostalgic tour of their old haunts—or at least the ones from the first movie. There’s the pet shop where she used to work; there’s Mighty Mick’s, more rundown than ever. The ice rink where they went on their Thanksgiving date is torn down now, so Rocky stands beside the rubble, reminiscing. He even goes by his old apartment—the 1818 one—the one he couldn’t wait to get away from; the one that STINKS. He’s fond of it now.

Which raises a question: In old age, do we get nostalgic about even the things we hated in our youth? Or is the nostalgia tour more for Stallone? A reminder of better days for him, and for the movies?

A cruise or something
I always felt “Rocky” epitomized the split between good ‘70s films and crap ‘80s flicks. The first half is a ‘70s character study of a down-on-his-luck dude, skirting morality and legality; a man who WASTED his life, in the words of Mickey. The second half is, you know, “Rocky”: an inspirational tale of perseverance and success. When the receipts came in, making “Rocky” the No. 1 box-office hit of 1976, Hollywood began to run with the second half of this equation and hasn’t stopped. We got less and less character study and greater and greater wish-fulfillment fantasy. In the subsequent “Rocky” movies, it wasn’t enough to go the distance; Rocky had to win. Then he had to beat: 1) angry blacks; 2) Russia; 3) punk kids. He got sleeker and smarter and less talky. In the original, he talked forever. Whatever was on his mind. He filled gaps.

We get this Rocky again. He’s not sleek here; he’s a pug. The first half of the movie is a character study of the lion in winter, and it’s not bad. It’s touching when Rocky puts on his glasses in the Italian market to read from his grocery list. There are subplots with his son, Robert Jr. (Milo Ventimiglia from “Heroes”), that aren’t cartoonish. Junior has a corporate job with a douchey boss who belittles him even as he admires Rocky. He’s trying to create space for himself away from his father’s shadow.

I think the relationship between Rocky and Little Marie went on too long and go too creepy (creepo), but I like the dialogue after he first drives her home. It says a lot about our society. Two kids, one black and one white, are hanging near her front stoop. That’s my son, she says.

Rocky: You know he sort of resembles you—he’s got that big Irish hair.
Marie: Yeah, it’s the other one.
Rocky: Yeah?
Marie: His father was from Jamaica.
Rocky (nodding): Jamaica. European. [Pause] Was you on a cruise or something?

I was hoping it would remain this kind of character study, but it’s a Rocky movie so we have to have a fight. But even here Stallone goes retro.

During the training sequence, Rocky drinks raw eggs and pounds frozen meat, neither of which he’s done since the first film. More importantly, his opponent here, Mason “The Line” Dixon (Antonio Tarver), isn’t demonized the way Rocky’s post-Apollo opponents were. Clubber Lang was all seething trashtalk, Ivan Drago amoral Teutonic stoicism, Tommy Gunn whiny, spoiled need. They’re cartoons. Dixon is a little more complex. The movie has mixed feelings about him that bend positively. He winds up a good guy. At the same time, he’s kind of a non-entity.

In the sequels, Rocky always won. Here, as in “Rocky,” he goes the distance but loses. But in losing he wins. As does Dixon. It’s win-win.

Sunshine and rainbows
Sorry, but it makes no sense that the boxing match is a win for Dixon. The criticism of him in the press is twofold:

In the match with Rocky, he shows heart. He breaks his hand and keeps going. He shows people he’s a true champ—that’s what everyone says afterward. But look at that second criticism. He barely wins a split decision against a 60-year-old man. What does that tell you about his place in boxing history? In losing, Rocky wins, but in winning, Dixon loses. He should never have taken the fight. It was lose-lose from the beginning.

We also get a ton of fudged messages to arrive at the feel-good ending. Paulie tells Rocky, “You’re livin’ backwards,” Robert Jr. tells his father he’s having trouble living in his shadow, and everyone objects when Rocky decides to fight again. All of these people are essentially correct but the movie doesn’t recognize that. In the movie, the fight totally makes sense, his son shouldn’t use excuses for why he’s not his own man—that’s what cowards do—and apparently it’s OK to live in the past if it’s with the girl you loved.

There are better lessons the movie could have played up. This, for example, is what Rocky says to his son before telling him that cowards use excuses:

The world ain’t all sunshine and rainbows. It’s a very mean and nasty place and I don't care how tough you are it will beat you to your knees and keep you there permanently if you let it. You, me, or nobody is gonna hit as hard as life.

So if nobody hits as hard as life, why isn’t that the story? Why go into the ring for the lesser hits? Why not make the superior hits the story?