Near the beginning of “On the Road,” the adaptation of Jack Kerouac’s seminal 1957 novel by screenwriter Jose Rivera and director Walter Salles, Sal Paradise (Sam Riley) is saying good-bye to friends Carlo Marx (Tom Sturridge) and Dean Moriarity (Garrett Hedlund), who are leaving New York for Denver, and the three gather in a photobooth for a picture. Back then, apparently, you only got one photo, not four, so Dean takes out a razor blade and cuts the picture in half. Meaning he cuts Sal in half. Then he gives Sal the half with his picture on it (plus half of Sal) and keeps the half with Carlo (plus half of Sal).

You could say this represents the great bifurcation of Sal Paradise, who is trapped between the writing life, as represented by Carlo (read: Allen Ginsberg), and the wild, mad life on the road, as represented by Dean (Neal Cassady), and only much later, near the end of the movie, when the two halves are brought together again, does Sal see a way out of his dilemma. He joins the Dean and Carlo halves of his soul by taping together many hundreds of 8x11 pieces of paper until he has a whole roll; then he just cuts loose on the keyboard. In mad-to-live, mad-to-talk bursts, he reproduces their life on the road on paper. Which is supposedly how Kerouac created his masterpiece.

I was never a fan, by the way. 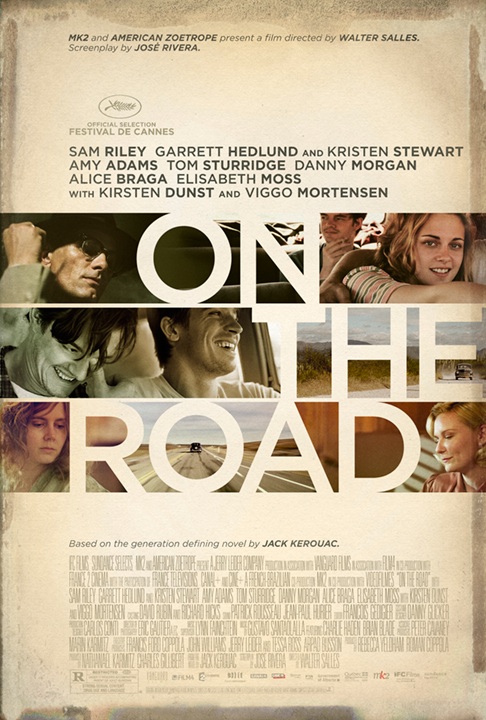 I read “On the Road” for the first and only time in my early 20s, which is when you’re supposed to read it and fall in love with it, but I didn’t. I was a careful kid. Too careful, really, but I knew what I liked. I liked Salinger, Roth, Doctorow, and Irving, who wrote beautifully about things that mattered. Kerouac, it seemed to me, didn’t write beautifully about things that didn’t matter. The adventures he described were episodic and dull. His voice felt like someone trying to push a Volkswagen up to 150 mph. I found the characters Sal and Dean and Carlo, based upon Kerouac and his friends, frenetic and pretentious.

I wasn’t the only one.

In the essay, “The Black Boy Looks at the White Boy,” from the collection “Nobody Knows My Name,” James Baldwin takes Kerouac apart. First he quotes him at length:

At lilac evening I walked with every muscle aching among the lights of 27th and Welton in the Denver colored section, wishing I were a Negro, feeling that the best the white world had offered was not enough ecstasy for me, not enough life, joy, kicks, darkness, music, not enough night. I wished I were a Denver Mexican, or even a poor overworked Jap, anything but what I so drearily was, a “white man” disillusioned. All my life I had white ambitions. … I passed the dark porches of Mexican and Negro homes; soft voices were there, occasionally the dusky knee of some mysterious sensuous gal; and dark faces of the men behind rose arbors. Little children sat like sages in ancient rocking chairs.

Then he lets him have it, keying in on one of Kerouac’s favorite words:

Now, this is absolute nonsense, of course, objectively considered, and offensive nonsense at that: I would hate to be in Kerouac’s shoes if he should ever be mad enough to read this aloud from the stage of Harlem’s Apollo Theater.

Salles’ movie, however, is quite good. Yes, it’s still episodic, and, yes, it merely builds toward dissolution—toward that moment when young friends are pulled in different directions, and they give up the mad life, or the chance at the mad life, and instead of seeing jazz in sweaty Negro clubs they see it at Carnegie Hall wearing suits and ties. But then the movie pushes past all that toward creation, Sal’s creation, or recreation, his melding of the two halves of his soul so he can write it all down. I like that.

We also lose, for the most part, Kerouac’s voice. This is generally a negative for movies adapting great works of literature. Who’d want to give up Fitzgerald’s voice in “The Great Gatsby,” Nabokov’s in “Lolita,” Proust’s or Joyce’s anywhere? But with Kerouac it’s a plus. I don’t have to hear him pushing his Volkswagen up to 150. I don’t have to hear him romanticize about dusky knees and lives he knows nothing about. Salles edits him. He makes Sal seem less of an asshole.

What they do with it
Watching Salles’ movie, I got a real sense of the narrow niche, in time and place, that allowed this story to occur. At one point they hop a train and I thought, “Fifteen years earlier, they would’ve been hobos in the Depression.” They rock out to Negro jazz and scat and I thought, “Ten years later, would it be rock n’ roll? And, if so, could they see themselves on the stage in a way they don’t now? Would they form a band, ‘The Beat Generation,’ with their Top 40 hit, ‘Mad to Live, Mad to Love’?” Their story happened the way it happened because it was after the Depression and after the war, but before the country was unified by television and the Interstate Highway Act of 1956.

Was the madness here a consequence of the war? A consequence of the bomb? Sal in the novel is ex-GI but I don’t think we get much war talk in the movie. One can assume these were kids raised during great economic dislocation, who, in adolescence, were geared toward war, propagandized daily, but who suddenly found themselves at the height of their energy and strength with no World War and no Depression. The rest of the world was licking its wounds, rebuilding from the rubble, but America was fairly untouched and affluent, and what did you do with that?

This is what Dean and Sal and company do with that:

They’re the model for every annoying undergraduate since.

They crisscross the country. At first, it’s Sal, alone, with his thumb, and he hangs with Carlo and Dean in Denver, then continues onto California, where he hooks up with Terry (Alice Braga, niece of Sonia), who is part of a migrant-worker community there. Everyone picks cotton, gets their dismal pay, but only Sal pauses before The Man with a look on his face. He can afford to. In voiceover he tells us, “I could feel the pull from my life calling me back.” He has that option. He gets to play at being a migrant worker and then leave. The others don’t. Hence Baldwin’s anger, above.

All of the characters love Dean. He’s handsome and vibrant and sexual. He wants, wants, wants, but without consequence, and there are always consequences. He wants the freedom to flit, but flitting means abandonment. It means betrayal. He’s a con man. I like when he gets the girl for Sal, Rita (Kaniehtiio Horn), and, with Carlo, the four of them are partying and drinking and dancing, and Rita says, “Bless me, Father, for I will sin.” Then we hear moaning from the bedroom, and the camera slowly pans left, to Carlo and … wait for it … Sal, dazed on the couch, where Sal wonders aloud: Wasn’t the girl for me? But all the girls are Dean’s.

The main girl is Marylou (Kristen Stewart), who is supposed to be 16, but Stewart hardly looks it. There’s also Camille (Kirsten Dunst), Dean’s wife in San Francisco. They have a baby, another on the way, when Sal shows up and Dean asks to go out with him by asking Camille along, too, knowing she can’t. She calls him on it but off he goes. When he returns at dawn, she demands he leave. There’s a great look on her face, panic as she gets what she wants, which isn’t what she wants. She wants him to stay, to beg her to stay, but that’s not him. So he leaves her there with one baby and another on the way. How bad must you be when William Burroughs (Old Bull Lee, played by Viggo Mortensen) calls you irresponsible?

The final abandonment is of Sal, with dysentery, in Mexico.

As I was writing this, though, I kept wondering about Marylou. If she was 16 in 1947 she’d be 81 now. Does she think back on those days? Does she remember sitting between two guys in the front seat of a ’49 Hudson shooting through Arizona, all three of them naked, and jacking them both off at the same time? What smile flits across her creased face then?

That’s the distance that matters to me. That’s the road the matters. We’re all on it.