What’s the appeal of movies like these? I don’t get it. At one point, having secured the White House after a bloody, bloody battle in which dozens of Secret Service officers die and the Washington Monument crumbles like the Twin Towers on 9/11 (or like the Washington Monument in “Superman II”), the terrorists, mostly Koreans, lower our bullet-riddled flag from the White House roof and toss it aside like yesterday’s garbage. It flutters to the ground in slow motion. The camera lingers on it as tragic music wells up. Why do the terrorists want to do this with our flag? They don’t. We want them to do this with our flag. So the moment will feel big. So it’ll feel monumental. So we’ll feel the need for revenge. So we’ll feel.

The movie is all about the American flag, really. It opens with the flag flapping inside the movie’s title; then we get a shot of the full Old Glory in slow-mo. 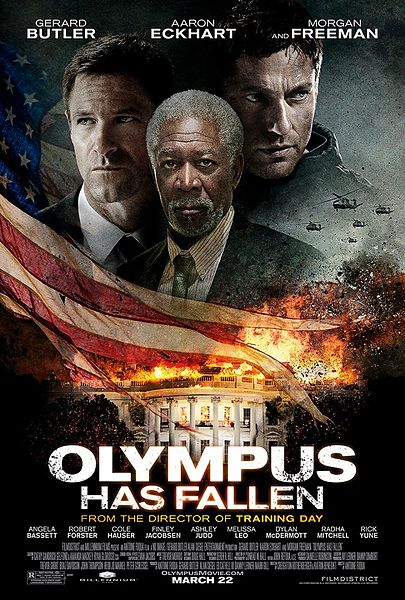 Later, yes, the terrorists mistreat our torn flag, and when news spreads that the White House has been breached, and the President and his staff taken hostage in his bunker, the Middle East (no specific countries are mentioned) cheers and celebrates and burns the American flag. At the end, after the good guys win and the bad guy gets a knife to the brain, the last shot is—you guessed it—the American flag, restored.

The flag has greater character development, a greater story arc, than the hero.

Globalization … and fucking Wall Street
This is a “‘Die Hard’ in a …” movie, maybe the ultimate one, since White House trumps boat, plane, even Air Force One, and certainly Nakatomi Towers, but it borrows mightily, almost obscenely, from the original. Terrorists and screaming hostages? Check. Meet-up with villain pretending to be ally? Check. Remote conversation between hero and villain? Check. Hero warning gung-ho would-be allies away from rigged rooftop only to witness death and destruction of same? Check. Girlfriend/wife melting after seeing what her hero-man has been through? Check and mate.

Our hero-man is a Secret Service officer, Mike Banning, played by Gerard Butler, who is making a career out of films like these (“300,” “Law Abiding Citizen,” “Machine Gun Preacher”). Eighteen months earlier, Banning saved the life of the president, Benjamin Asher (Aaron Eckhart), whose car was about to slide off an icy bridge. Unfortunately he couldn’t save Asher’s wife (Ashley Judd), so he’s been reassigned to a desk job at Treasury so he doesn’t remind POTUS of that horrible tragedy. One wonders: Was there no one else he could guard?

The attack comes on July 5, the day after, when there are already rumblings along the DMZ, and when the South Korean Prime Minister arrives for a visit with POTUS. That’s when a plane, piloted by impassive Asians (you know), shows up in D.C. airspace and two U.S. jets go to greet it. Unfortunately they’re no match for this newfangled Asian weapon—basically a cross between a sprinkler and a machine gun. We just don’t have technology like that. We only have technology that, you know, can target an ant on the other side of the world and take it out. But we need viable bad guys. Otherwise, how do we know we’re viable good guys?

Mike sees all this from his office and runs into the fray barking orders. “Go on!” he yells to passersby. “Get down!” he shouts to civilians. “RPG!” he warns the Secret Service officers. “NO!” he shouts as they get riddled with bullets. He’s last man standing. Everyone else that could possibly guard the White House, I mean every single motherfucking one of them, dies. Why? Because it has to be just one guy. We don’t know how to do it otherwise.

Meanwhile, Pres. Asher and his team have escaped into his bunker, the Presidential Emergency Operations Center (PEOC), and, though it breaks protocol, he brings the South Korean PM and his detail with them. Oops. That detail, including Kang (Rick Yune), and former Secret Service officer Forbes (Dylan McDermott), are the terrorists. Well, not Forbes. He’s just a sell-out. Why does he sell out the President of the United States along with the United States of America? Because, as he says, and please imagine your dumbest voice here, “globalization and …  fucking Wall Street!”

Kang, the would-be conqueror, whose mom (or was it his dad?) was blown up by a U.S. mine long ago, is the leader of that Korean terrorist group making all the headlines, and one of the most wanted men on the planet. Amazing that he got into the White House. But then we never had a picture of him. Our intelligence sucks. Stupid intelligence. Good thing we have Banning.

A lone man using violence to achieve justice
You could pretty much write it from here. Banning rescues the President’s son, Connor (Finley Jacobson, in his first non-dog movie), and then, in a game of cat-and-mouse, picks off the terrorists one at a time, sometimes four a time, on his way to the ultimate showdown with Kang.

Meanwhile, Kang’s true goals are slowly revealed. He demands of the acting president, Speaker of the House Trumbull (Morgan Freeman), that the U.S. leave South Korea and the 7th fleet pull back, but this is mostly a ruse. He’s really after the Cerberus code.

What’s the Cerberus code? It’s a three-pronged failsafe to blow up launched nukes. Basically Kang needs the code from the Chairman of the Joint Chiefs, the Secretary of Defense and the President, all of whom are prisoners in PEOC; and each time he tortures one, POTUS caves. “Tell him!” he barks. Then with a sneer: “But he won’t get the code from me.” The Chairman gets a knife to the throat, while the Defense Secretary (Melissa Leo), in a scene that’s pretty hard to watch, gets punched and kicked and pummeled. I mean, she gets the shit beaten out of her. (Is this some anti-Hilary fantasy?) But she stands tall. Or crawls tall. Until the President tells her to cave. Because “He won’t get the code from me!” Besides, no nukes have been launched, so what’s the point of the code?

How does he do it? I think he just has it. He just enters it. Still, it takes him awhile to launch the countdown sequence, since he has to allow Banning to get close. Kang’s superefficient team, which took out the entire U.S. military-industrial complex, gets taken out, one by one, by one guy. Then this one guy, battered and bruised and bloody, takes out Kang with the promised knife to the brain and saves the U.S. (and much of Canada and Mexico, I’d imagine) from destruction, and from every wrongheaded move by every other person in the movie. Seriously. The President caves, the Speaker negotiates, the General rushes in. Everyone else makes the obvious wrong move. Why? Because it has to be just one guy. We don’t know how to do it otherwise.

What liberal Hollywood?
So what’s the appeal of movies like these? Is it that favorite Thomas Jefferson quote of nutjobs everywhere? “The tree of liberty must be refreshed from time to time with the blood of patriots and tyrants.” So dimwits watch movies like these and feel a surge of patriotism. How sad. I don’t need movies like these to feel patriotic. I don’t need to see the U.S. being attacked, and the White House in ruins, and the flag fluttering to the ground. What does it say about those who do?

More, what’s the effect of movies like these? Do they make us more paranoid? Bit by bit? Would patriotic paranoids be less fucked-up if Hollywood didn’t exist? Is this the true source of their anger toward liberal Hollywood?