Movie Review of the Day: Ebert on “Atlas”

“I was primed to review 'Atlas Shrugged.' I figured it might provide a parable of Ayn Rand’s philosophy that I could discuss. For me, that philosophy reduces itself to: 'I’m on board; pull up the lifeline.' There are however people who take Ayn Rand even more seriously than 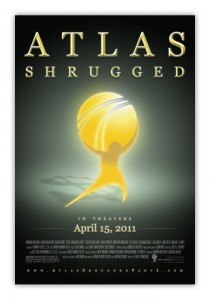 comic-book fans take 'Watchmen.' I expect to receive learned and sarcastic lectures on the pathetic failings of my review.

”And now I am faced with this movie, the most anticlimactic non-event since Geraldo Rivera broke into Al Capone’s vault. I suspect only someone very familiar with Rand’s 1957 novel could understand the film at all, and I doubt they will be happy with it. For the rest of us, it involves a series of business meetings in luxurious retro leather-and-brass board rooms and offices, and restaurants and bedrooms that look borrowed from a hotel no doubt known as the Robber Baron Arms.

“During these meetings, everybody drinks. More wine is poured and sipped in this film than at a convention of oenophiliacs. There are conversations in English after which I sometimes found myself asking, ”What did they just say?“ The dialogue seems to have been ripped throbbing with passion from the pages of Investors’ Business Daily. Much of the excitement centers on the tensile strength of steel.”