“Of Miracles and Men,” an ESPN 30-for-30 documentary about the Soviet hockey team of the ’60s, ’70s and ’80s, with a particular focus on its upset defeat at the 1980 Winter Olympics in Lake Placid, NY (“USA! USA! USA!”), opens with a quiet walk through Central Park by Soviet hockey great Viacheslav Fetisov. Soon after, we see the end of that most famous hockey game, the “Miracle on Ice,” and we hear Al Michaels’ iconic countdown:

We’ve got 10 seconds! The countdown going on right now. Morrow up to Silk. Five seconds left in the game. Do you believe in miracles?! Yes!!!!

An hour later, after detailing the rise of the dominant Soviet hockey machine, replete with incredible black-and-white training footage, and getting the “Miracle on Ice” game in detail, we see its end again; but instead of Michaels’ countdown, we hear the Soviet announcer, who says the following in a matter-of-fact tone:

But it seems it is too late. Five seconds before the buzzer. [Game ends: place goes crazy.] Team USA wins over our hockey players and now is leading with three points in the table. With that, we are finishing our commentary. The reporter was Nikolai Ozerov. 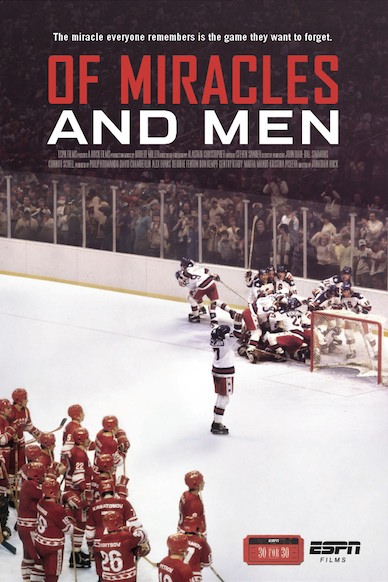 The best docs I’ve seen, from “Paris is Burning” to “Restrepo” to “The Act of Killing,” reveal a perspective we haven’t seen before, or maybe even considered before, and that’s what director Jonathan Hock does here. The western voice is all but muted. Al Michaels isn’t interviewed, nor Mike Eruzione or Jim Craig. It’s Fetisov, and Vladislav Tretiak and Vladimir Myshkin. It’s Sergei Makarov and Vladimir Petrov and Boris Mikhailov. They’re older now, obviously, but generally quiet and unassuming. There is, though, an attempt by some, particularly Seva Kukushkin, a Soviet sportswriter for the Soviet news agency Tass, to dismiss the Miracle on Ice. At one point, Kukushkin is asked what he wrote about the game and its drama. His response:

Now I’m not much of a chest-beater when it comes to patriotism. One of the beautiful things about America is that you can afford not to be jingoistic. But I make an exception with the Miracle on Ice. I think it’s the greatest upset in international sports in the 20th century. A bunch of college kids beating the mighty Soviet machine? Amateurs who played together a couple of months beating professionals who’d played together since they were, what, 10? And practiced and lived together 24/7? In the 1980 medal rounds, the U.S.S.R. won by the following scores: 16-0, 17-4, 8-1, 4-2 and 6-4. Hell, a few weeks earlier, they beat the U.S. in a preliminary game 10-3. They shouldn’t have lost. Yet they did. To college kids.

Plus, it really was a seminal event in American history. It helped make the country safe for patriotism (and, sadly, jingoism) again. I grew up in the 1970s when patriotism was the province of scoundrels and fools—like Maj. Frank Burns on “M*A*S*H.” We went through Vietnam, Watergate, gas crises, hostage crisis. As a country, we either seemed impotent bullies or victims of small, petty nations. We had little to be proud of.

I came to this documentary, which is now streaming on Netflix, through Joe Posnanski, who ends his piece this way:

The Sophia Loren story is the greatest cold-water throwing I’ve ever seen. It’s utterly beautiful and brilliant. The Miracle on Ice was our seminal sports moment, the closest thing to Greek myth that we have. And he compares the U.S. to a kid kissing Sophia Loren. It’s beautiful. And it’s probably true too. The U.S. did kiss Sophia Loren. Only thing is: She remembers. She definitely remembers.

This is what makes muting the American voice in the doc so important. We are left to provide that voice. Kukushkin’s line is OK but the metaphor is all wrong. It was a battle, not a romantic act. It's Posnanski who's right. All you have to do is watch the faces of the Russian players being interviewed. It’s 35 years later, but that loss still stings. It still hurts. It will always hurt.

Other miracles
Fetisov is the closest thing the doc has to a protagonist. We follow him not only into Central Park, but back to his childhood apartment in Moscow, and on a return visit to Lake Plaicd with his (gorgeous) daughter. “In America,” he says, early in the doc, “people always want to talk about the Miracle on Ice. But we made our own miracles.”

The doc gives us some of these. After an impossibly long bureaucratic battle in the 1980s, Fetisov became the first man to leave the Soviet Union for work in the states. He didn’t defect. The Soviet government just let him travel. That’s a kind of miracle, and it presaged the bigger one of walls coming down, governments changing, the world changing.

Another miracle is the rise of Soviet hockey in the first place. Before the Cold War, Russians didn’t play hockey; they played bandy, an ice game with shorter sticks, a ball, and eleven men per side. But bandy wasn’t an Olympic sport, and Stalin wanted dominance in the Olympics to prove to the world dominance in economic/political systems. And so it was ordered. And so it was done.

The Soviets began competing in Olympic hockey in 1956, and won six medals over the next six Olympiads: gold, bronze, gold, gold, gold and gold. But the big breakthrough was competing against, and beating, western professionals in the Canada Cup and against teams of NHL All-Stars.

Watching, we’re reminded that every enemy that seems like a monolith isn’t; it’s always fraught with internal strife. For Soviet hockey, that battle was between Anatolie Tarasov, who essentially invented the Soviet version of the game, and who is seen here with a poet’s spirit and a great love for the sport that he passed on to his players; and Viktor Tikhonov, who took over in 1977, and is called an accountant by his former players. They say he had little love for the game. He was the coach of the 1980 team. Meaning he was the coach who pulled Vladislav Tretiak, generally regarded as the best hockey goalie in the world, after Mark Johnson scored with one second left in the first period to tie the score.

“It was shocking,” Tretiak, now in his 50s, says matter-of-factly. Mikhailov adds, “For the Americans, it was like a life-saving gulp of air.”

There’s a great moment when Hock tries to dig deeper. Did the players object? Did the team captain object? “We’re Soviet people,” Petrov says. “[We] follow all the orders set by those in charge.” Even today, no one points a finger until Tatiana Tarasova, Anatolie’s daughter, and a figure-saking coach at the 1980 games, is prodded again and again by Hock and finally throws up her hands. “Yes, it was a mistake!” she says with almost a laugh. Tretiak, more serious, adds, “The situation never sat easy on my soul.”

Reminder: the Soviet team still went ahead in the second period, 3-2. It was in the third period that the U.S. scored twice in two minutes to go up 4-3. But there were 10 minutes left.

Alexei Kasatonov: “Everyone [on the team] still believed we would win. Nobody panicked or grew desperate.”

Mikhailov: “To the very end, we thought we’d tie the score.”

Other Siberias
Hock gives us the rise of the Soviet hockey machine but not its fall. Too bad; it’s interesting. Canada was the dominant force in Olympic hockey from 1920 to 1952, winning six gold and one silver in seven Olympiads. Then the USSR took over and won gold every year but 1960 and 1980 And now? Now, it’s Canada again. It’s like the Cold War was a housing bubble, or the PED era in baseball. It was a fevered period, but the fever is over, and normal life—Canadian hockey on top—resumes.

“Of Miracles and Men” is a much recommended and much humanizing movie. I remember our jokes in Minnesota after the “Miracle on Ice” victory. Me and my high school friends talked about how the first goalie, or maybe that second goalie, or certainly the coach, would wind up in Siberia. We thought that’s how things worked in the Soviet Union. But that didn’t happen. The coach strengthened his position, the team kept winning. The loss to the U.S. was the banishment; that was Siberia.

With that, we are finishing our commentary. The reporter was Erik Lundegaard.