Is this the moment when movies finally moved too fast for their own good?

“Now You See Me,” directed by Louis Letierrer (“Clash of the Titans”; “The Incredible Hulk”), zips and swirls and spins around its characters so fast that it leaves them behind. It gives us awful dialogue and predictable situations. It goes “Abracadabra!” but no magic happens.

The Four Horsemen
There’s promise at the beginning. Four magicians with different talents are recruited by a mysterious man in a hoodie and reappear a year later as a great Vegas magic act—a one-off but we don’t know it at the time. Amid their various swirls and spins they take a man from the audience (he’s French), ask him for his bank (it’s in Paris), transport him into its vaults, and then transport back, with the money, which is then showered onto the audience. 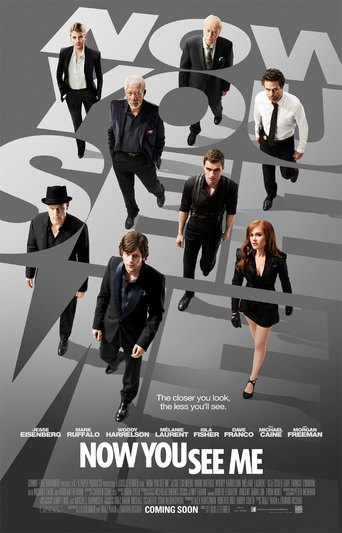 This brings in both the FBI, in the guise of Dylan Rhodes (Mark Ruffalo), and Interpol, in the much hotter guise of Alma Dray (Mélanie Laurent).

The movie becomes theirs. Rhodes, cocky, annoyed, is ready to take down the Four Horsemen, as the act is known, at their next show in New Orleans, but he winds up being taken down on stage, literally, by audience members, who have been hypnotized to tackle whoever says the word “Freeze!” (Anyone who didn’t see this coming wasn’t paying attention.) Meanwhile the Horsemen’s benefactor/manager, Arthur Tressler (Michael Caine), winds up being bankrupted by his own act. That’s the big trick this time. They take the millions from Tressler’s bank account and disperse it among the audience, all of whom have lost money during the global financial meltdown. It’s Robin Hood with a puff of smoke. After a chase through New Orleans, in which Rhodes is made to look the fool again, the magicians disappear.

The final act takes place in New York, by which time our Horsemen, now famous, the talk of whatever mass media is left, are merely on the edges of the story.

Subplots include a magic-act debunker, Thaddeus Bradley (Morgan Freeman), who makes multimillion dollar videos, and who hounds and embarasses Rhodes; the story of Lionel Shrike, a magician who, years ago, attempted to escape from a safe in the bottom of the East River but who was never seen again; and a mysterious organization called “The Eye,” which is like Freemasons Hall of Fame for magicians.

The actors playing the Horsemen play versions of other roles they’ve played better elsewhere. Jesse Eisenberg’s J. Daniel Atlas is supersmart and talks superfast in the manner of Mark Zuckerberg. (One wonders if Eisenberg will ever be allowed to play dumb again.) Woody Harrelson’s Merritt McKinney is a washed-up rapscallion in the manner of Woody Harrelson. Isla Fisher is the girl who used to be with Atlas and now receives the halfhearted, amused attentions of McKinney, while Dave Franco’s Jack Wilder, a pickpocket, is just happy to be there. They’re not bad together, but they disappear—poof!—for most of the movie. Because we need less talk and more swirls and swoops.

I like the “corked” conversation between Harrelson and Fisher. That was fun. Plus we get some not-bad dialogue about magic:

Thaddeus: When a magician waves his hand and says, “This is where the magic is happening,” the real trick is happening somewhere else.

But the focus on the FBI is dull, and the romance between Rhodes and Dray is so forced it almost feels like rape. Laurent is given almost nothing to do. At one point, because Interpol has no jurisdiction in a situation, she’s told to wait in the car. When Rhodes returns she yells at him, “Don't you EVER tell me to stay in the car, EVER!” Right. Sure. OK. But ... why did you wait in the car?

The Fifth Horseman
There’s a lot of chest thumping, arguments over who’s a step ahead of whom, and it all leads up to what’s it all about, Alfie. Turns out the mastermind of it all, the man in the hoodie, is the son of Lionel Shrike. It’s an elaborate revenge plot taken against the safe company that made the defective safe that killed him, the bank in France that I forget what, and Arthur Tressler who did somethingorother.

So who’s the man in the hoodie? The one you least suspect: FBI agent Dylan Rhodes. And at the end, he frames Thaddeus Bradley as the Fifth Horseman, inducts the Four Horsemen into “The Eye,” and goes to France to continue his bad romance with Dray.

“Now You See Me” is an empty, flashy movie, but it’s not all bad. Here’s my favorite part: a bit of dialogue on an airplane. It carries an implicit criticism of the entire movie industry:

Rhodes: What I hate is people who exploit other people.
Dray: Exploit them how?
Rhodes: By taking advantage of their weaknesses. Their need to believe in something that’s unexplainable in order to make their lives more bearable.