More than just local TV news, Dan Gilroy’s “Nightcrawler” is an indictment of modern American success. It’s about a man who pulls himself up by his bootstraps and finds his niche and makes a name for himself and creates a business. He does it with the following qualities:

You hear about the first two qualities a lot from folks who disparage those who don’t make it in America, but not much about the third. But that helps. In America, ethics just get in the way.

The right kind of blood
Louis Bloom (Jake Gyllenhaal) starts the movie a petty thief, bug-eyed and alert, a small dog chained to a fence and looking for escape. He drives a clunker even as passes ATMs and dealerships with red sports cars: the easy reminder of all that he doesn’t have. But then the cops catch up to him. Actually, no. They just pass him on the way to the scene of an accident, where Louis watches Joe Loder (Bill Paxton), a nighttime freelance cameraman for local TV news, or “nightcrawler,” doing his thing. Intrigued, he asks him for a job. 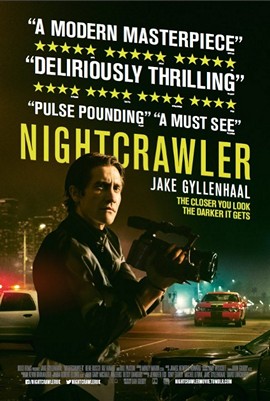 He gives the awful, Dale Carnegie schpiel we’ve already heard him give: a hard worker who sets high goals. No dice. So he goes into business for himself.

Turns out he’s perfect for the job. Filming people hurt? Dying? Entering the homes of shooting victims without permission? Moving bodies to get a better shot before the police arrive? All in the game, yo.

“If it bleeds, it leads,” Loder tells him early on, seemingly bored with the cliché, which, we quickly find out, isn’t even true. Blood is wanted but it’s got to be the right kind of blood. Black on black crime? Local news, in the person of graveyard-shift KWLA news director Nina Romino (Rene Russo), isn’t interested. She wants urban crime (read: colored) creeping into the suburbs (read: white). The racism presented here is behind-the-scenes but overt and accepted. “Think of our newscast,” she says, “as a screaming woman running down the street with her throat cut.”

Louis is persistent and methodical throughout. After his first forays and successes, we get a montage of the stories he files and labels on his home computer: “Carjacking”; “Toddler stabbed”; “DWI crash”; “Savage dog attack.” Eventually he’s able to buy that red sports car and more expensive cameras. He hires an assistant, Rick (Riz Ahmed), a hemming and hawing kid he can verbally bully. And eventually Loder, tired of the competition, offers him a gig. But now Louis turns him down. Loder offers again. Same. Repeat. Finally, Louis tells him, matter-of-factly, “I feel like grabbing you by your ears and screaming in your face, ‘I’m not interested.’”

The next night, gearing up for sweeps, Loder scoops him and crows about it. So Louis fiddles with something under Loder’s van and the next time we see Loder, he’s the accident victim, being carried away on the stretcher while Louis hovers overhead, filming. Loder bleeds, so he leads. He who holds the camera holds the power.

“I will never ask you to do anything,” he tells his hires later in the movie, “that I wouldn’t do myself.” But that pretty much encompasses everything.

Gyllenhaal hardly blinks in the movie. He’s monstrously creepy—never more so than when he marshalls his facts and stats and Dale Carnegie schpiel to blackmail Nina into sleeping with him. You know when you leave a movie and momentarily imagine yourself as the hero? I left “Nightcrawler” feeling as super creepy as Louis. Talking with Patricia afterwards? Everything I said felt off. Smiling at a boy on the escalator? There was nothing good in it. I felt everyone could see the creep inside me.

But then the movie—perhaps aspiring to the cynicism of “Network,” or the craziness of “The Stunt Man”—takes it a step too far.

Not the smart move
Patrolling, Louis and Rick hear of a home invasion in a ritzy neighborhood—the perfect story!—and arrive before the cops. Hell, they arrive before the criminals leave. There’s a big gate in front, with a long driveway to the mansion, and Louis runs down with his camera. When he gets to the house he hears gunshots, hides in the bushes and keeps filming. He films two men leaving; then he goes into the house and films the bodies he finds; then he rushes the footage to KWLA News.

Except he doesn’t tell them, or the cops, about filming the murderers leaving the home. Instead, he tracks them down himself, stakes out their place with Rick, and, when they drive to a local fast-food joint, calls 911. Cops arrive, there’s a shootout, then a car chase. Cars go flying like in an action movie. Louis is creating his own movie. He’s a movie director. For good measure, he makes sure that Rick, who’s begun to blackmail him, gets killed in the process.

The problem? Up to this point, for all of his ethical and moral and legal gaps, Louis has made the smart move. He’s done the thing that furthers his career. But here? Withholding evidence to set up a car chase? That’s the dumb move. The risk is huge, while the reward .... I would argue the reward would’ve been greater if Louis had simply done the right thing. Sure, film the bodies inside the house, but also reveal the getaway shots. He would’ve been the “hero cameraman.” The center of attention. A minor celebrity. Plus he still could’ve filmed the capture—it just wouldn’t have been as cinematic. Offer the cops a quid pro quo. I lead you to the bad guys, you tell me when you’re going to make the bust so I can film it. Isn’t that how it works? Instead, this. “Nightcrawler” is a fun, cynical movie, but this is a cynical bridge too far for me.

I’m curious, by the way, if this is how it works—if local TV news truly rely upon freelancers for most of their footage. I wouldn’t be surprised. More, I’m curious about a question the movie doesn’t raise—that it’s not its business to raise—but which is inevitable if you think for two seconds: What’s the appeal of “If it bleeds, it leads”? For viewers, I mean. Why do people want to see blood? And why do they want the particular kind of story that Nina breaks down—urban crime creeping into the suburbs? Most viewers, one assumes, are from the suburbs. Such stories, one assumes, make them afraid. So why do they want to feel afraid? It’s something I don’t understand. It’s something I’ve never understood.

The crowning touch? All of the local TV anchors in this indictment of local TV news are played by real-life LA anchors: Kent Shocknek and Pat Harvey and Sharon Tay and the like. Because they agree with Gilroy’s indictment of their industry? That would be nice. But one assumes it’s because it’s Hollywood. One assumes they just want to be part of the broadcast.