If this doesn’t kill documentaries starring the documentarian, nothing will.

The subject is a great one. Shakespeare: Why does he resonate? Why are we scared of him? Does he still matter? How is he taught and how is that a problem? What the hell is iambic pentameter anyway?

And our guides for all of this? Dan Poole and Giles Terera, two out-of-work, late thirties British actors, children of “Star Wars” and “Indiana Jones,” who, four years ago, for reasons that remain vague, decided to make this documentary. 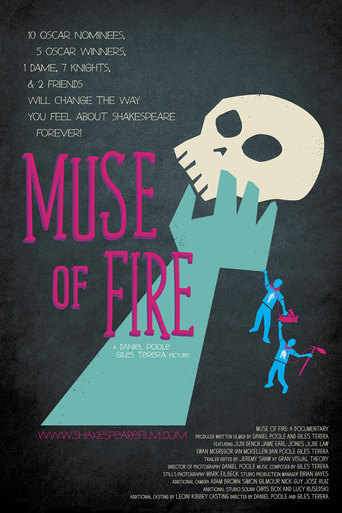 They spend much of it telling us how difficult it was to make it. Dan, in particular, does this. He almost seems to resent us for watching. Other times he’s giddy and goofy. Does he think their bits together are good? Pissing in this field? Taking the piss out of each other? Eating fast food? When he was on screen, I kept flashing to that scene in “Annie Hall” when Alvy is forced to watch an unfunny stand-up comedy routine: “Look at him mincing around. Thinks he’s real cute, you want to throw up ...”

Their holy grail keeps changing. Oh, if only they could interview Sir Ian McKellen. Hey, they get him! Oh, Jude Law’s playing “Hamlet” in London but they can’t get tickets. Bugger. But wait, there’s a special show at Elsinore Castle in Denmark! And they get to interview him there! Hey, you know how both of us only got into Shakespeare, really understood him, when Baz Luhrmann’s “Romeo + Juliet” was released in 1996? So imagine interviewing Baz, the Wizard of Baz, all the way in Hollywood, right? Guess what?

“We couldn’t believe it!”

That’s a line we keep hearing, as the thing they want to happen happens. Did they try to get other things to happen? Interview Leonardo DiCaprio about playing Romeo or Claire Danes on Juliet? Did they try to get Branagh? Why only talk up the successes? More, why were they successes? How did these two blokes, without even the dignity of Rosencrantz and Guildenstern, get to interview these famous folk? Did one lead to another lead to another? “Oh, you got Sir Derek? OK, then.”

Reading Shakespeare like Vonnegut
On the plus side, I kept thinking of my own experiences with Shakespeare.

We first read him in ninth grade, “Romeo and Juliet,” and then watched the Franco Zeffirelli version of the movie, during which all the boys fell in love with Olivia Hussey and all the girls fell in love with Michael York. I didn’t get that one. Weren’t they supposed to fall for Romeo? Tybalt’s an asshole; he’s the cause of much of the tragedy. I had so much to learn.

Shakespeare didn’t really take for me until college. We were reading “Othello,” Act 1, Scene 1, going through the motions of this passage:

Zounds, sir, you’re robbed! For shame, put on your gown.
Your heart is burst, you have lost half your soul.
Even now, now, very now, an old black ram
Is tupping your white ewe.

Then the professor took over and read the passage with verve and left no doubt the meaning of tupping. “Ohhh,” I thought. By the time I arrived in Seattle in 1991 I was reading Shakespeare regularly. I remember turning pages of “King Lear” on lunch breaks as if it were as easy to read as Kurt Vonnegut. Later, when I worked in the warehouse at the University Book Store, and I got tired of listening to music on my walkman, I switched to BBC productions of Shakespeare: “Hamlet” starring Branagh and “King Lear” starring John Gielgud. That last was the one for me. Branagh was in this one, too, as Edmund, and I kept listening to his soliloquy in Act 1, Scene 2: the “Why bastard? Wherefore base?” speech. He made it sound contemporary. He brought it to life.

That’s the key. Make it resonate. I believe it’s Steven Berkoff in the doc who says you should always put the actors in modern clothes. Update the setting to bring out the universal in the words.

Most of the American actors says Brits do Shakespeare better, but some Brits say Shakespeare and his contemporaries probably sounded more American. They also say that some of the best interpreters have been American: Brando in “Julius Caesar,” for example. Me, I thought of Dustin Hoffman as Shylock in “The Merchant of Venice” on Broadway, which my friend Dean and I were lucky enough to see in 1989.

At some point I expected clips—Brando, Leo, Ian McKellen’s great opening of “Richard III”—but I suppose they cost too much. You can watch them for free on YouTube but they cost too much for these guys to put in the doc. That’s a shame. But surely some Shakespeare movies are in the public domain? According to IMDb.com, more than 1200 versions of Shakespeare’s plays have been filmed in some manner, starting in 1898 with a short version of “Macbeth.” Couldn’t they have given us some of that history? Instead of another shot of Dan pissing in a field?

Done/undone
A few of their road trips are worth it. A British man, with great enthusiasm, teaches Shakespeare in prison, where lines such as Lady Macbeth’s “What’s done cannot be undone,” have a particular resonance. They go to Madrid to see a Spanish production of “Henry VIII,” where one of the actors professes amazement that Shakespeare could so perfectly delineate not just the modern woman but the modern Spanish woman.

Why Shakespeare? Judi Dench recites some lines, then, nodding her head, says, “Now if you’d written that, you’d be up all night looking at yourself in the mirror.”

“I don’t know any actor at the end of their career saying, 'What a waste of time all of that Shakespeare was,'” adds Ian McKellen.

Maybe Tom Hiddleston sums it up best: “He speaks to every man and every woman in every age in every time.”