I watched this one night on FilmStruck (RIP) because it was a Harold Lloyd comedy and I hadn’t seen many if those. I came away thinking I didn’t particularly like Harold Lloyd. At least I didn’t like the character he plays here, Harold Hall, a kid from Kansas City who dreams of being a movie star. When the wrong publicity photo is sent to a studio head—a shot of a handsome man—he’s invited to LA for a screen test. Havoc ensues.

Is he the anti-Marx Brothers? The Marxes brought chaos wherever they went—but intentionally. They didn’t revel in the chaos or apologize for it. It just was. They just were. They popped pretensions in part because they didn’t have any. 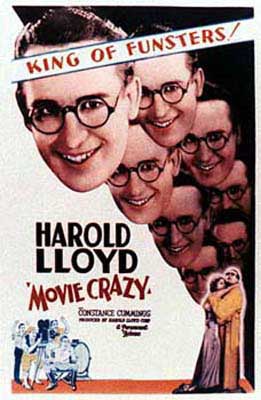 Harold Hall is all pretension. He assumes he’s a great actor but isn’t. He’s well-meaning but a walking disaster area. He cares about the problems he causes but keeps causing more. He huffs, surprised, at everything.

I found most of it annoying; I found none of it funny.

Yet I loved Constance Cummings as the love interest, Mary Sears, a movie star, who is first amused by the funny little man—she nicknames him “Trouble”—then intrigued because he doesn’t make a pass at her like every other man. But he’s too dim to know she’s also the Hispanic actress on the set—she’s made up Spanish for a role—and she uses this mistaken-identity to test him. He fails. Every time. He can’t stand up to the Spanish actress so he has to lie to Mary—the same woman. Eventually, she tosses him to the curb. Ah, but he lucks into more opportunities. Then out of them. Then he feels sorry for himself.

Example. He sees her walking into a friend’s house, writes a note and gives it to the maid, who gives it to Mary. She tears it up, writes him a note: “There is no need waiting out there. I have nothing more to say to you.” Ouch. Except she writes it on the back of an invitation to a dinner/dance at the Falcon Hotel in honor of such-and-such, and that's the only part he reads. He assumes she wants to meet him there. And there, in the hotel bathroom, he accidentally switches jackets with a magician, whose pockets and sleeves are lined with birds, mice, etc. Chaos ensues.

Not sure why this made the Criterion collection.

“Movie Crazy” is one of the last directing credits for Clyde Bruckman, who directed Buster Keaton in “The General,” and who helped develop Laurel and Hardy as a team. He was also an alcoholic who wound up killing himself in 1955, age 60. He borrowed Buster Keaton's gun, went into a restaurant in Santa Monica, and, possibly after eating a meal he couldn't pay for, entered the restroom and shot himself. Most of his work on “Movie Crazy” was apparently done by Lloyd himself. That's one of the movie's saving graces to me, the direction—that and Cummings—since we get some nice sweeping backstage shots.

Lloyd would only make four more movies: one in every even year of the '30s, and then “The Sin of Harold Diddlebock” for Preston Sturges in 1948.