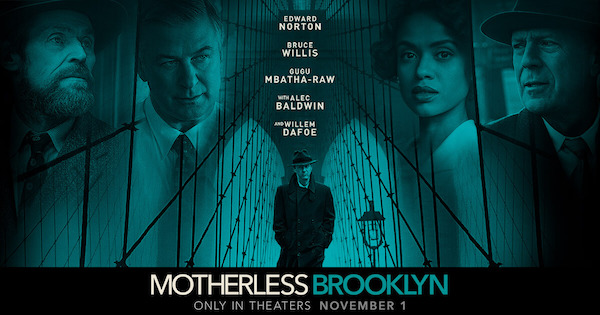 Sure, it's a great idea. Roman Polanski’s “Chinatown” is the great modern film noir—one of the greatest movies ever made, really—and it was about a 1930s-era LA private investigator who pulls a thread and discovers the corrupt ways in which his city was built: How water was stolen from the north to make LA and the arid south thrive. The man behind this theft is corrupt not only in business but in his personal life: He raped his own daughter and now wants the grown child from that crime—both daughter and granddaughter—to molest all over again. In the end, he reaches for her with tentacled arms. Meanwhile, his daughter, the movie’s femme fatale, who has always been more victim than victimizer, is killed and no one pays for it. There is no justice in the world. There’s just … Chinatown.

In Edward Norton’s “Motherless Brooklyn,” based on the novel by Jonathan Lethem, a 1950s-era NYC private investigator pulls a thread and discovers the corrupt ways in which his city was built: How Moses Randolph (Alec Baldwin), obviously based on Robert Moses, was the behind-the-scenes, out-of-control power that leveled neighborhoods and built bridges and pushed people and undermined democracy. He is not only corrupt in business but in his personal life: He raped a black maid in a hotel in the 1920s and is now being blackmailed about the grown child from that crime. As we watch, and make connections with Polanski's film, we wonder if the girl is safe, and whether there will be justice in the world, or just more … Chinatown.

But forget it, Jake, this ain’t no “Chinatown.”

“The Wire” Redux
What is, right? But this adheres so close to that storyline you can’t help but compare them. Again, great idea: Robert Moses as Noah Cross, with a bit of Donald Trump tossed in. And played by the guy who plays Trump on “SNL.”

It even opens with the pulling of a thread—a literal one. Lionel Essrog (Norton) has Tourette’s, a photographic memory and is on the spectrum. He’s got issues, in other words, including pulling on the threads on his coat. But the photographic memory makes him useful to private dick Frank Minna (Bruce Willis), who nicknames the orphaned young man “Motherless Brooklyn.” Both Lionel and Coney (Ethan Suplee) are backing up Minna on a case they know nothing about, and which leads, after a kidnapping and chase, to the death of Minna. Now Tony (Bobby Cannavale) runs the joint. But it’s the twitching, cursing Lionel that needs to pull at the thread of Frank’s death. He needs to know who killed him and why.

After some leads he winds up at a public hearing about urban renewal, in which the real power is the aforementioned Moses Randolph. Also present: community organizer Gabby Horowitz (Cherry Jones), her beautiful assistant Laura Rose (Gugu Mbatha-Raw), and a bearded, bummy-looking rabble rouser, Paul (Willem Dafoe). Lionel, pretending to be a reporter, buys Paul dinner and listens as he rants about Moses. Then he goes to the library and discovers—alley oop—Paul is Moses’ brother. Then he goes to a nightclub in Harlem, which is like “The Wire” redux. A Miles Davis-like quartet is led by Omar himself, Michael Kenneth Williams, while the joint is run/owned by good ol' Bunnie Colvin, Robert Wisdom, who is called Billy Rose here, and who is the father—or the uncle?—of Laura Rose.

The chase to find answers is a bit long so I’ll cut to it. Laura is the daughter of Moses Randolph—he raped and impregnated a black maid in a hotel in the 1920s—and Minna found out, got evidence, and with Billy Rose tried to blackmail him. That’s why he was killed; Billy Rose gets it, too.

But the pieces just don’t fit together well. In “Chinatown,” they just pop into place—ah, of course!—and create a picture of true horror and corruption. Here, you struggle to make them connect, and the picture they create is … I guess kinda bad? Maybe? I don’t buy a lot of the relationships, particularly the brothers. Is Paul that dumb? Is Moses that unnecessarily cruel? Is a woman as beautiful as Laura Rose really interested in our twitching, Tourette's hero?

I didn’t buy that Moses would agree to meet Lionel in that private pool, and where, dripping, he gives a not-bad speech about the nature of power:

Do you have the first inkling how power works? Power is feeling, knowing, that you can do whatever you want and not one fuckin’ person can stop you. And if someone else has a dumb idea that you don’t like, well, that’s the end of that idea, or the end of that person if you want.

If I want to build highways while the rest of the country is broke, I’ll punch through any damn neighborhood I want. If some Negro slum is where I’m going to put my federal project, or the off ramp of my bridge, well, the goodie-goods can shriek and moan all day long. … And if you think I’m gonna let some chip who never should’ve been born, or your small-time boss, or my brother with his ideals and his forgeries in my name slow down the work I’m getting done in this city, then you’ve got a lot to learn about how power works. Because those people are invisible. They don’t exist.

Right, there’s even a character similar to Polanski’s Man with Knife (“We don’t like nosy people”) but not nearly as memorable or brutal. Lionel gets beat up, but dashingly so. Not like Nicholson with that bandage on his nose for half the fucking movie.

Plus Norton is no Polanski. But who is?

Here. Imagine Moses with Laura, and about to do to her what he did to her mother, and Lionel there, aware, and helpless to stop it. That’s a noir. And that's the true power Moses alluded to by the pool. That's Chinatown, Jake.

Again, it’s a nice try. It’s going for the king. But as Omar said, you come at the king, you best not miss.