The story’s about what the movie is.

Or, to put it another way, they all want Indian dollars.

None of them succeeded particularly well. Just don’t tell the movie that.

Bucks for Bucs
It’s a feel-good movie, soft around the edges. Early on, Bernstein, down on his luck, is watching TV with his assistant Aash (Aasif Mandvi), and cricket comes on. Bernstein rattles off a few reasons why it’s not a real sport; Aash just stares and sputters. I wanted to hear why it was a good sport. A smarter movie would’ve given us those reasons in the same amount of time but “Million Dollar Arm,” despite being written by Tom McCarthy (“Station Agent,” “Win Win”), isn’t a smart movie. 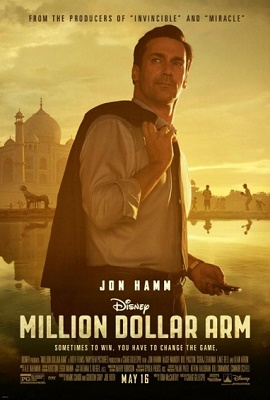 It’s a warm bath of a movie.

You see where things are going early on and the movie takes its time getting there. Bernstein loses the big client, the creditors are nipping at his heels, then switching back and forth between Susan Boyle on “Britain’s Got Talent” and a game cricket, he comes up with a scheme. “How fast do they pitch in cricket?” he asks Aash. “Fine. How fast do they bowl in cricket?”

Apparently it’s based upon a true story. In reality, it became a reality show in India: “The Million Dollar Arm.” In the movie, it’s more grassroots. Bernstein travels from Indian city to Indian city with a sleepy scout (Alan Arkin, who could do the role in his sleep), a shrugging, bureaucratic Indian assistant, Vivek (Darshan Jariwala), and an over-eager Indian assistant, Amit (Pitobash). They find two handsome kids who can throw in the low 80s, Rinku and Dinesh (Suraj Sharma and Madhur Mittal), and Bernstein brings them back to the states to train under Tom House (Bill Paxton). That’s the first half.

The second half is equally transparent. As the boys need to become better players, Bernstein needs to become a better person. In the manner of Hollywood movies, these coincide. I.e., the boys are only able to display their true talents once Bernstein cares enough to let them. Once he tells them to just “have fun,” once he allows Amit to give the inspirational speech, once the tryout becomes a real tryout (on a ballfield before a few scouts) and less sideshow (in a parking lot, before cable-TV cameras), then they flourish.

And they didn’t. In real life, Dinesh Patel pitched a few games in the Gulf Coast league—the lowest rung of the minors—before returning to India. Rinku Singh stuck it out, made it to Class A ball for a few years, didn’t do poorly (overall: 10-6, 2.99 ERA), but was done by 2012. Not bad for a kid who never picked up a baseball until he was in his 20s, but he’s not saving anybody’s bacon.

This is just business
We get a few OK moments in the movie’s two-plus hours. Paxton is believable, Arkin—as I said—can do the role in his sleep, and Lake Bell, as Brenda, the doctor-in-training tenant next door, is refreshing. Her character seems like she has a life beyond the movie’s storyline. “She seems like a real person,” Patricia said as we watched.

I like a line of Vivek’s: “Don’t lose patience, J.B. You are going to need it in India.” I laughed out loud at a line from one of the scouts: “I’m sorry, but they’re not for the Mariners.”

Otherwise, it’s a squishy, sunset movie. It’s a multibillion-dollar business telling us that “This is just business” is a line bad people say ... after they take our money.