“Mid90s,” written and directed by Jonah Hill, is a coming-of-age movie that took me back to my own coming of age.

It shouldn’t have. I turned 12 in the mid-70s not the mid-90s, in Minneapolis not LA, and definitely not around skateboarding culture. At Stevie’s age, I would’ve been writing and drawing comic books, not mastering moves on a board. I never wanted to be a rebel, or hang with them, particularly not anyone like Fuckshit (Olan Prenatt), all wild hair and attitude and not much else—one of two leaders of a rag-tag group that hang out in a skate shop and periodically rouse the rabble.

But here’s what took me back: reaching a certain age, 10, 12, and suddenly having to navigate shit you’re supposed to know but have no clue about. It’s generally stuff about girls, and sex, or about how to act with guys. What to say, what not to say, and when. What’s cool and what isn’t. What are the rules? Where are the rules? At such moments, ignorance isn’t bliss. It can make you the butt of jokes for years.

Your shit for their shit 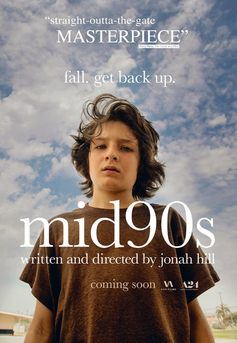 Here’s an example from my childhood—probably around 6th grade. My friend Dan and I were walking along 54th Street toward Little General and Rexall’s Drugs, most likely to buy comic books. I think it was winter. It always seemed like winter back then. Dan, who was the same grade as me but older by a month, and who used the cutting remark “You’re too young to understand” too often, said he had a joke. He ran thumb and forefinger along the sides of his mouth, which was puckered like a gaping fish, and said, “Blower’s cramp. Get it?” I, of course, didn’t. I knew there was something about “blowing” that had something to do with ... girls? But I didn’t know what it was. Most times I would’ve just lied; I would’ve pretended to be more sophisticated than I was. But something in the quick way Dan said “Get it?” made me think otherwise. So I said no. “You don’t?” he asked in disbelief. No, I said, what is it? Eventually he had to own up it meant nothing. “It was just a test,” he said. I had passed. For now.

That’s Stevie (Sunny Suljic) here. The movie begins with a nasty beatdown from his older brother, Ian (Lucas Hedges). The two live in a cramped house with their single, mostly absent mom, Dabney (Katherine Waterston, just four years from playing the object of Joaquin Phoenix’s affection in “Inherent Vice”), and they all seem isolated. Ian exudes inarticulate anger. Stevie is sweet but trapped; he’s looking for an out.

Why skateboarders? Is it because they seem to do what they want when they want? Would he have drifted toward them without the beatings from Ian? Either way, he does. He lingers in the skate shop, hangs on the outskirts of their conversation. The first to acknowledge him is the youngest, Ruben (Gio Galicia), who probably wants a protégé of his own. He wants someone beneath him. When Ray (Na-kel Smith), for example, admonishes Ruben for drinking all the water from the jug and tells him to go fill it up, Ruben gives the task to Stevie—who is delighted. It’s his in. It’s the preteen boy’s crush on older boys.

Ruben is the one forever telling Stevie he failed the test. Like saying “thank you”? What the fuck, dude? That’s for fags. And the skateboard he bought from his older brother? With the ’80s cartoon figure on it? What is he—a kid? That’s for fags, too.

There are other unspoken rules Stevie is trying to navigate—specific to the gang. Who gets nicknames and who doesn’t? Fuckshit is Fuckshit because he begins so many sentences with “Fuck, shit...” Fourth Grade (Ryder McGlaughlin), who spends more time filming than skating, is a bit on the dumb side. Stevie acquires the nickname “Sunburn” because he asks Ray if black dudes get sunburned. Ruben is mortified the question is asked, then more mortified that Ray doesn’t really seem to mind it; that it leads to this nickname, which seems like a badge of honor. That’s Ruben’s role: entrée for Stevie, eyeing him with jealousy forever after.

I like how this gang of kids, which seems monolithic from the outside, breaks down into individuals the more Stevie hangs with them. Fuckshit, with his light-brown skin and blonde curly hair, is the mouthy one, the stoner, the guy ready to fight. He’s probably the most affluent, too. He rebels because he can afford to. Ray can’t. Ray is looking to see what money can be made in skateboarding. He’s looking for a way out. He’s also the wisest. In a late-movie heart-to-heart, he tells Stevie:

A lot of the time, we feel that our lives are the worst. But I think that if you looked in anybody else's closet, you wouldn't trade your shit for their shit.

Cf., Ruben. They drop him off at a motel-like place but Stevie sees him bolt down the steps after he goes up them. Meaning he doesn’t really live there? Or he does but can’t return? Or won’t? We never find out.

I particularly like this aspect of “Mid90s”: The arc of the movie is Stevie slowly fitting in with a gang that’s slowly breaking apart.

Only if you’re really interested
Does it end too quickly? Did for me. I guess that’s a compliment (we want more) but it still isn’t (it wasn’t as fulfilling as it might’ve been). The car crash is done well. Fuckshit is driving, fucked up, and arguing with Ray; and Fourth Grade, who isn’t supposed to know any better, is the one to speak up: “Could you, like, pull over?” But it’s already too late. As soon as the words are out, the car is upended, on its side, and Stevie is in the hospital. His mom arrives to see the gang asleep in the waiting area. Does she soften toward them? Should she? Then the boys go into the room. They talk. Fourth Grade brings his movie, his video of them. They watch it.

It ends in a vacuum but in a way it began there, too. Did Stevie have any friends before? Usually when you make the leap to a new group, particularly a planned leap, as Stevie does here, there’s at least a friend you leave behind. We get no inkling of this. It’s just his abusive older brother, his absentee mom, and him. No friends, no school, no nothing. Kayla in “Eighth Grade” was like this, too. Don’t any junior high kids have friends as they make the leap toward older, cooler friends?

That said, I really love this movie. I think of the scene where the gang skateboards between traffic down the middle of an LA hill in the magic-hour light, with the Mamas and Papas’ “Dedicated to the One I Love” on the soundtrack. The scene is reprised near the end with just Stevie and Ray, after their heart-to-heart, and to Morrissey’s “We’ll Let You Know”:

The magic hour is gone, and what light is there is bruised. It’s aching.