“The prerequisite for a joke is that it be funny,” he admonishes his fellow agents later in the movie. Indeed. 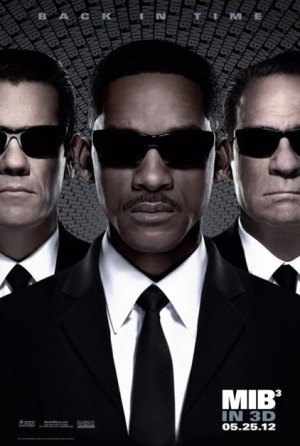 The movie relies on the tired device of time travel, and there’s a moment after J travels back to July 1969 when both he and K (Josh Brolin, doing an inspired Tommy Lee Jones imitation) have to explain their situation, which is basically the plot of the movie, to doubting military officials. It gets them into further trouble: dropped on the pavement and handcuffed and such. Because no one believes them, it’s all too absurd, ha ha. Question: why does this never happen to whomever pitches the movie in the first place? How come director Barry Sonnenfeld, say, or writer Etan Coen (no relation), didn’t wind up decked and handcuffed on the Sony lot?

“MIB 3” opens with a woman (Nicole Scherzinger ), wearing FMBs, bustier, and sporting deep cleavage, bringing a cake, which jiggles even as her cleavage does not, into a maximum security prison for her boyfriend, Boris the Animal (Jermaine Clement, of “Flight of the Concords,” another inspired casting move). He’s been locked up for 40 years but seems more dangerous than ever. Of course the jiggling cake contains a small creature, or weapon, that lives in Boris’ hand, and with this, and a few less-organic weapons, he blasts his way out of prison, which turns out to be on the moon. We see him bounding past the American flag planted there in July 1969. Cue credits.

Meanwhile, back on Earth, as they say, Agents J and K (Tommy Lee Jones) are going through the motions. K is as emotionless as ever, and J, after 14 years, is suddenly unaccepting of it. At the funeral of Agent Zed (Rip Torn), K offers almost nothing in his eulogy that’s personal or meaningful or emotional, and J reacts as if this is news, as if he hasn’t been working with the guy for 14 years. It’s not funny and Will Smith’s timing is way off. He seems sluggish. Did he have a cold during filming? The flu? Nothing clicks. “How did you get to be like you?” he asks K. Since we know where we’re heading, into the past, where we’ll meet a young K, we assume we’ll find out. Everything will be explained.

During an investigation into a restaurant in Chinatown, J and K battle Boris, and in this manner, and others, we discover the following:

So we know what Boris means when he tells K, “You’re already dead.” K doesn’t. He and J have a falling out—J in his apartment playing video games, K in his study talking on a landline—and then he gets ready for Boris with a spacegun. He’s got it aimed at his door when everything shimmers and warbles and he simply vanishes. Boris has gone back to July 16, 1969, the day of the moon launch, and killed Agent K. So little imagination here. Why not go back to his birth? Why not go back to his father or grandfather? And why pick on the poor Apollo program? Didn’t “Transformers 3” already do that?

J shimmers and warbles, too, but he still remembers K while everyone else has forgotten. The new head of the agency, however, Agent O (Emma Thompson, horribly wasted), who had a possible thing, or fling, with K back in the day, realizes something’s amiss, and directs J to the stoner in the guitar shop, where he gets a thingamajig, and, with the no-longer-extinct Whatchacallums now attacking Earth, jumps from the top of the Chrysler Building and back to July 15, 1969, to prevent Boris from killing K and changing the course of you-know-what.

A few things in the movie work. I like the fact that the filmmakers don’t ignore racial matters in 1969 (just in 2012). I like Brolin and Clement, and I particularly like Michael Stuhlbarg (“A Serious Man”; “Boardwalk Empire”) as Griffin, an alien who perceives all of the different possibilities in any moment in time. As a result, he’s never sure which reality he’s in. Is it the reality where Boris bursts through that door and kills him? Whew, no. Is it the reality where the New York Mets, the perennial doormats of Major League Baseball in the 1960s, win the World Series in 1969? Maybe. He gives J and K a window into that October 1969 reality from an empty Shea Stadium in July. We, and they, see a sunny, packed, October Shea Stadium, where Jerry Koosman pitches to Davey Johnson, who pops up to Cleon Jones, and the 1969 “Miracle” Mets become the champions of baseball. Griffin waxes philosophic on this. He talks up the imperfections in that final baseball, because the woman who manufactured it in 1962 was having an affair, and thus wasn’t paying enough attention to her work, and thus the ball floated a few centimeters too high, allowing the pop-up to happen. He talks up how Davey Johnson became a baseball player rather than a football player because his father didn’t have the money for a football, and how Cleon Jones was nearly named something else. He calls it all a miracle.

“A miracle is what seems impossible,” Griffin says, “but happens anyway.”

All of which is nice but beside the point. Davey Johnson, or any player, flying out isn’t a miracle. It’s about as routine a play as you get in baseball. It would’ve been far more miraculous if, in that instant, he’d hit a homerun to tie the game, and the Orioles had fought back from a 5-3 deficit in Game 5, and a 3-1 deficit in overall games, to win the 1969 World Series over the upstart New York Mets. But the movie has its themes and goes with them. And we go to Cape Canaveral, the site of the first moon launch, and the battle with the two Borises.

Of course the small glowing device, which will become the Arcnet Shield that will save all of Earth from the Boglodyte attack, gets knocked out of K’s hand and dangles off the arm of the Apollo 11 launchpad, while K fights young Boris and J fights old Boris. Will they save themselves, and Earth, in time? (Psst. They will.)

J and K only get onto the launch pad in the first place because a colonel (Mike Colter), apparently the head of security for Apollo 11, is given a window into a possible reality by Griffin and so lets them in. Earlier, J made passing reference to his father—how he didn’t know him, how his father just disappeared and all that—and when I saw the Colonel, I thought, “This isn’t going to be J’s father, is it?” Of course it is. So J kills old Boris, K kills young Boris—seeming to disrupt the time continuum, but whatever—but not before young Boris kills the Colonel. Which is when a young boy pulls up in a car, a young J, and older J gets misty-eyed as he realizes, yes, this was him, and this was his father, whom he doesn’t remember because K uses the neuralizer to wipe the boy’s, or his, memory rather than have him deal with the trauma of a lost father, and the whole thing becomes a sappy, lost-father (Colonel)/found-father-figure (K) storyline in which J and K reconcile in present time.

Except ... how does this explain the way K is? Something traumatic was supposed to happen to him at Cape Canaveral. Is this it? That the Colonel was killed and the boy’s memory wiped, and K has carried this knowledge like a heavy stone all through his 14-year relationship with J? But why does this make him more distant and emotionless? And why, in present time, does J show him the watch, the watch that was the key to his relationship with his forgotten father, and thank him? Shouldn’t he be angry? Shouldn’t he say, “You took my father from me; you took from me what makes me me”? Instead, the movie shimmers and warbles to its happy end and the audience leaves the theater effectively neuralized. You will think you had a good time. You will tell your friends it’s an OK movie. If you’re a critic, you’ll give it a 69% on RottenTomatoes.com.

Yeah, I’m getting too old for this.