I get that “Deep Throat” was taken as a title, but surely there’s a less cumbersome subtitle than “The Man Who Brought Down the White House.” Not to mention more accurate. The White House still stands, yo. It’s Nixon who was brought down.

Mark Felt was, of course, Deep Throat, Bob Woodward’s garage freak, the man on deep background in the Woodward/Bernstein investigation into Watergate, which, yes, brought down the Nixon White House, paving the way for the Ford one, then Carter, Reagan, Bush, Clinton, Bush II, Obama and, yeah, here we are with the Trump White House and its attempts to control and/or malign the FBI. Those who don’t learn from history are doomed to be fucking assholes. 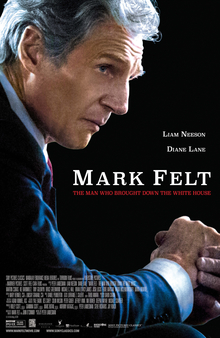 So guess when Bob Woodward rears his pretty head in this movie? An hour in—two-thirds of the way through. He’s a blip. Hell, he’s not even Felt’s main press contact! That would be Sandy Smith of Time magazine (Bruce Greenwood), whom Felt meets in a diner like normal folk, and who, when Felt finally tells him to take out his notepad, warns him: “Mark, are you sure about this?” You know: like any true reporter on top of a world-breaking scoop would.

Smith is also one of the many characters who keep telling us who Felt is:

So why does Felt become more opaque the longer the movie goes on? And why does “Mark Felt,” which should bring greater clarity to Watergate—revealing the other side of “All the President’s Men”—bog us down in murkiness?

All we’ve got are pieces
It even begins wrong. On April 11, 1972, Felt goes the White House to meet with the three Johns of the Nixon administration: Dean (Michael C. Hall, a good match), Mitchell (Stephen Michael Ayers, not so good), and Ehrlichman (Wayne Pére, shitty). Referencing the antiwar protesters outside, we get this convo:

Ehrlichman: Goddamn Russian revolution out there. Why aren’t we arresting anybody?
Felt: Because that ... isn’t a crime.

So we’ve set up our dynamic in the most reductive way possible. Thanks, Hollywood.

The Johns are offering Felt a kind of quid pro quo: If J. Edgar Hoover is fired, would he be a friend to the administration? Maybe as director? But Felt is a company man, loyal to the Bureau and to Hoover. He’s so loyal to Hoover, in fact, that after being dismissed, he sticks around to give a long, exacting synopsis of FBI intelligence gathering regarding the peccadillos of Washington politicians—all of which Mr. Hoover keeps safely in his secret files. And if something should happen to Mr. Hoover? Who knows what will happen to them?

It’s a threat. From our hero. Our guy is someone who actually makes us feel sorry for Nixon's men. The fuck?

Most of “Mark Felt” is dimly lit, ominous, airless. We’re forever in closed rooms, forever getting close-ups of faces. Everyone is trying to figure things out. Everyone but Felt, who has them figured out and is trying to keep that knowledge from his face. He’s inscrutable. Do we even know when he decides to leak? Do we understand how he first meets Bob Woodward and why he goes to him?

The basic conflict is straightforward—not to mention topical. The Nixon administration wants to control the FBI, particularly its investigation into the Watergate affair, and Felt wants to keep the Bureau independent. Halfway through, we get a good scene that exemplifies this conflict. By this point, Hoover has died, and Felt has already determined that Hoover’s replacement, L. Patrick Gray (Marton Csokas), is doing Nixon’s bidding rather than the FBI’s. So Felt has begun to leak information about Watergate. John Dean calls him up to investigate and plug the leaks.

Dean: We want you to do something about it, Mr. Felt. Now.
Felt: Fine. But I don’t understand.
Dean: Which part?
Felt: The part about you calling me. The White House has no authority over the FBI.
Dean: Uh, we can—
Felt: At all, Mr. Dean.
Dean: But we can suggest—
Felt: I’m afraid the White House has nothing to suggest to the FBI.

That’s great. It also sets up a great inner conflict: How does Felt investigate leaks that he himself is causing—and that others are beginning to suspect him of—while protecting his men? While not accusing the innocent? The movie doesn’t really have an answer. At one point, doesn’t he let a subordinate twist in the wind? Then doesn’t he clear him? Kinda sorta? It’s never as straightforward as you’d want. It's as if half the movie is on deep background.

Here’s a clearer answer from the book the movie is based on:

On one report prepared by his team, Felt dramatically circled a paragraph stating that [assistant U.S. attorney Donald E.] Campbell had been approached by Woodward before a leak but denied giving any comment. Felt wrote boldly capital letters, “LAST PAGE OF ATTACHED MEMO—HERE IS ENTIRE ANSWER.” That was not the only time Felt tried to deflect attention from the FBI to other potential leakers.

That’s some nasty business. But so what, right? Campbell was probably one of those Nixon cronies. He probably got what he deserved. Except Campbell turned out to be one of the prosecutors who helped break James McCord (in January ’73), which helped break the Watergate case wide open.

We also get way too many dull subplots. Felt’s daughter has left home, (like in the Beatles song), and the Weather Underground is blowing things up (like in that other Beatles’ song). Are the two related? Does Felt think they are? Does he let the personal get in the way of the professional in pursuing the WU? The movie implies it. And what’s up with his wife? The movie opens with the two of them generically happy, but before long she’s blaming the FBI for ruining her life, and he’s blaming her for ruining their daughter.

Throughout, Felt never loses Neeson’s Irish accent, just as L. Patrick Gray, who is Irish, never loses Csonka’s Eastern European one. It’s like a battle over who is the least likely American.

What the puzzle is supposed to look like
What a mess. Writer-director Peter Landesman, a former New Yorker reporter, directed the underrated “Parkland,” about the JFK assassination, as well as the disappointing “Concussion,” about the collision of science and football starring Will Smith. This is his worst. By far.

This is what it should’ve been. Felt is a man who, in order to save the FBI (from the Nixon administration), betrays the FBI (by leaking its secrets). And he’s successful. He helps reporters connect the dots and bring down a president. Except in saving the FBI (by bringing down Nixon), Felt exposes the FBI (to the Church committee). Its secrets are revealed, too. Its image is tarnished. And he gets caught up in this. He’s indicted before a Grand Jury for violating the civil rights of Americans in pursuit of the Weather Underground. He loses by winning.

A movie that connected those dots would be worth seeing.