Most mainstream movies don’t think much beyond the current year. Maybe they go back a decade. Ancient history is history before Elvis. The dark ages. I remember when I reviewed “Little Nicky”  in which Adam Sandler played a literal son of Satan who head-banged to heavy metal music, and my immediate thought was, “OK. So what did he listen to for the 3,000 years before heavy metal music?”

Luc Besson’s “Lucy” widens the scope a bit. We see the first cells splitting, and the first human, Lucy, drinking water from a stream. We’re told that matter only exists because of time. We’re told we never really die, which is nice to know. I like the intelligence of it all, the awareness of a time period beyond our own, the encouragement of a thirst for knowledge.

Here’s what I didn’t like. Halfway through, our hero, a modern-day Lucy (Scarlett Johansson), could kill the movie’s main villain, a drug dealer and gangster named Mr. Jang (Choi Min-sik of “Oldboy” fame), but she doesn’t bother. 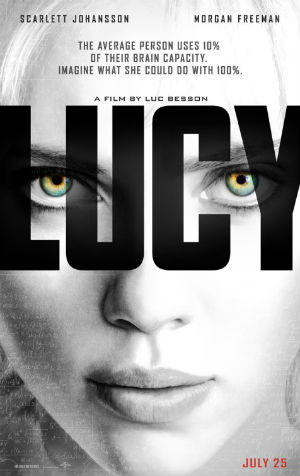 She leaves him alive. Three-quarters of the way through she could do the same. By this point, she’s so powerful she can just think somebody dead. Still, she leaves him alive. An argument can be made that he’s so below her now it’s like killing an ant, or an amoeba, but that’s not why he lives. He lives because the primitive monkey brains in the audience, our primitive monkey brains, need the tension. We need the race for the prize, the villain tracking the hero, the gunfight at the OK Corral.

I also wasn’t a fan of how cartoonish Mr. Jang was; and that he was supposed to be Chinese but spoke Korean.

But leaving him alive? That’s some rookie shit. I expect that from someone using 5% of their brain’s capacity, not 50.

Brain brain, what is brain?
It’s a good concept anyway.

Human beings use only about 10% of the brain’s capacity. So if we could tap into the rest? Yowzah.

It’s contemporary times, more or less, and Lucy, last name unknown, is hanging out in Taipei, and going to school there, but somehow doesn’t speak a lick of Chinese. She’s also got a ne’er-do-well, week-long, Aussie-ish boyfriend, Richard (Danish actor Pilou Asbaek of “A Hijacking”), who tries to cajole her into delivering a briefcase to Mr. Jang at a Taipei hotel. No go. So he locks it to her wrist and tells her the key is with Mr. Jang. She’s pissed, sure, but off she goes: to the front desk, up the elevator, and into the private sanctuary of Mr. Jang, who’s busy wiping the blood of his enemies from his face. He also kills Richard en route. Because blood. Plus all of this is intercut with scenes of jaguars on the hunt in the Serengeti. Because Luc Besson.

The briefcase turns out to be carrying blue crystals called CPH4, which is apparently a chemical used in the second or third trimester of pregnancy to create us. This is its synthetic version. It’s a drug. For what purpose? Who knows? But Mr. Jang wants it taken to Rome, Paris, Berlin and New York. The captive mules for these four cities, including Lucy (NYC), have their stomachs cut open and a Ziploc bag of CPH4 inserted. The bad news for Mr. Jang, and the good news for us, is that, before putting Lucy on a flight to NYC, they apparently stash her in a grungy prison, where a skinny Chinese dude tries to fondle her, and when she objects, kicks her repeatedly in the stomach. Of course the bag inside her is broken open. It’s our gamma radiation moment. Her eyes even go all blue. She lucies out.

Her first stop is the hospital to remove the rest of the crystals. By this point (20%?) she knows Mandarin Chinese, and with a glance at the X-rays can determine whether the patient on the table will live. He won’t, so she shoots him dead and takes his place. While she’s operated on, she calls her mother. That’s a nice scene. She says I love you. She says she remembers everything. Everything. Petting the cat. “You couldn’t remember that, honey. You were less than one year old.” But she remembers. She remembers the taste of her mother’s milk. She remembers every kiss her mother ever gave her. Johansson is quite good here. Throughout the movie, really. You get the sense that Lucy calls her mother not because she’s about to die but because she calculates human interaction will soon be meaningless to her, and she needs this last moment.

That’s an interesting thought, by the way. In most stories where a character develops massive brain power—think Gary Mitchell in Star Trek’s “Where No Man Has Gone Before”—they become as imperious as Mussolini. They view humans as ants, amoebas. But an argument can be made for the opposite. Mussolini was hardly a Rhodes Scholar, so why is he the model? Shouldn’t their humanity grow with their brain power? Does Lucy’s? A bit. She certainly has a wider perspective. She calculates she has 24 hours left before she reaches 100% brain capacity and then ... Who knows? So what should she do? She asks this of a scientist, Prof. Norman (Morgan Freeman), who has long studied the topic. We’ve even seen some of his lectures intercut with Lucy’s story. He talks about the two ways the cell’s knowledge can continue to live—immortality and reproduction—and urges Lucy to do what human beings have always done with their knowledge: “Pass it on,” he says. I like that. Pass it on.

Since this is Besson, and since international box office, she gathers everyone in Paris—other mules, Prof. Norman—so she can get the rest of the CPH4. She hangs with a good cop with a great face, Pierre del Rio (Amr Waked), who protects her when she’s not busy protecting herself, and Besson keeps reminding us of where she is on the brain capacity meter. At 90%, while gun battles rage all around, she travels through time: New York today, then 100 years ago, then with the Native Americans. Then dinosaurs. Lucy even meets the original Lucy, our ancestor, whom we met at the beginning of the movie.

Pass it on
Some of this isn’t bad. But Besson isn’t interested in straying too far from the thriller genre. He talks smart but executes stupid. So just as a bloodied Mr. Jang, our apelike contemporary, whom Lucy has left alive again and again, closes in on her sitting in a chair surrounded by awestruck scientists and computer banks she’s just digested (or something), she’s reaching 100%. Will she make it? Or will Mr. Jang kill her first?

The tension is unbearable.

No, it’s not. He fires, she disappears. Because she’s everywhere now. That’s the message she leaves him.

And the message Besson leaves us?