For 90 minutes, “Locke” barely leaves the inside of a BMW X5 heading to London. Along the way, the driver, Ivan Locke (Tom Hardy), talks to various people on his computerized car phone but it’s basically a one-man show. Be forewarned. On the other hand, if you’re going to do a one-man show, Hardy ain’t a bad choice.

Why the drive? Ivan Locke is in the midst of abandoning his family and job for another woman. Let me rephrase that. Ivan Locke is in the midst of abandoning a family he loves, and a high-paying construction job for which he is immensely suited, and of which he is immensely proud, for a woman he doesn’t know and doesn’t particularly like. You almost wonder if the movie began as an exercise for writer-director Steven Knight (“Dirty Pretty Things,” “Eastern Promises”). Can you show a man abandoning everything worthwhile and still retain empathy for him?

You can. We do. The bigger question is whether we buy it.

Fixing things
Locke is a precise, calm, super-responsible man. He’s a man who fixes things. “I’ll fix it,” he says, again and again. “It’ll all go back to normal.” 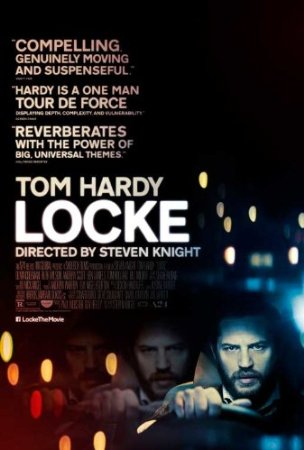 But the longer he drives, the more he’s breaking everything.

The other woman? She’s pregnant with his child. She’s about to give birth. And she has no one else. So he has to be with her. Despite the fact that he’s expected at home to watch a big football match with the kids and he’s expected at work early the next morning for the biggest concrete pour in European history. It will be the base for a 50-plus-story building.

Here’s who Locke mainly talks to as he drives:

None are helpful. His wife collapses from the news, then rises up with vindictiveness; Bethan complains, whimpers, keeps asking if he loves her even when it’s apparent to all that he does not; and Donal begins to drink and fuck up on the job.

Locke tries to fix all of these things.

He also talks to a fourth person, but not on the phone. It’s his dead father, whose weakness and irresponsibility made Locke the super-responsible man he is. Locke is so responsible he can’t let a baby be born into the world alone. It’s a “good intentions” movie, and the highway to London is his path to hell.

Except I didn’t quite buy it. Choosing Bethan and the baby over everything else? There’s too much martyrdrom in that. The scales are too heavy on the other side.

That the movie stays interesting is a testament to Hardy and to the character he and Knight create. Years ago I did the Proust Questionnaire, and “calm” was my answer for the quality I most like in a man. Hardy gives us this. He also shows us the turmoil, the anger, raging within the calm.

Patricia and I argued over the accent. I assumed Russian immigrant—thus that extra-precise English pronunciation—but Patricia thought Irish. It also borders at times on Indian/British. The correct answer? It’s Welsh. Except that’s not the correct answer, either. Hardy thought he was basing it on a Welsh bloke but the guy later admitted he grew up in Surrey. So take your pick.

Fixing things, the next generation
Question: Does everyone around Locke have to be this much of a fuck-up? Or is Locke secretly attracted to fuck-ups? So he can fix their problems. So he can be the man his father never was.

Answer: There’s a grace moment at the end—the sound of a baby being born into the world—but the real release for me, and I believe for Locke, comes in a conversation with his son, Eddie (voice: Tom Holland), who, unaware of the emotional turmoil raging, has been talking to him excitedly about the football match that they were all supposed to watch together. Near the end, he calls again. This time, Locke doesn’t pick up, he just listens to the voice message.

By now Eddie knows. He knows things are broken—perhaps irrevocably. So he tells his dad about a goal that a player named Caldwell scored. Except he knows it’s still not right. Because his dad wasn’t there and his mother was crying. So he tries to fix it. He tries to fix it in the manner of his dad:

We recorded it for you, so you have to come home and watch it, okay? You have to come home, and I have an idea, okay? We'll pretend we don't know the score, and pretend it's happening then, it's live. And me and Sean will go mad all the same, and you can have your beer and Mum can make the sausages. So that's what we'll do.

“The Lockes were a long line of shit,” Locke says to his dead father, “but I straightened the name out.” Now Eddie is doing the straightening. He is trying, like his father, to make it all go back to normal.