Come back, Greta Gerwig. All is forgiven.

For most of the decade, Gerwig has been acclaimed for playing characters I found annoying even as other critics, not to mention the movies themselves, seemed to find them loveable. There she was again, in “Lola Versus,” “Frances Ha” and “Mistress America,” a quirky, solipsistic twentysomething trying to find herself in New York. Yay. By the end of each movie she’d learned a lesson, but the lesson wasn’t deep or meaningful. The movies felt airless. They were about young, privileged people in a spoiled age, and I could give a shit. 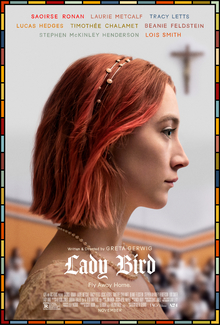 But even that didn’t prepare me for this. “Lady Bird,” written and directed by Gerwig, and starring Saoirse Ronan, is a coming-of-age story about a high school senior in Sacramento, California in 2002/03, who acts out and searches for her place even as she prepares to take wing. She rejects everything around her for everything she doesn’t have:

I hate California, I want to go to the east coast. I want to go where culture is. Like New York, or Connecticut or New Hampshire.

The irony is that once she gets this thing, once she winds up in New York City, she embraces everything she’d previously rejected: her family, her church, California. Even her given name: Christine. She has to fly to let “Lady Bird” go.

Is there a similar irony with Gerwig? She made her name as the kooky girl in New York. She had to come home again, to California, to become great.

Given name
I like that we never find out why Lady Bird chooses that name—just that she’s adamant about it. She calls it her given name. “It was given to me by me,” she tells the theater director, Father Leviatch (Stephen Henderson), before her audition for the school musical, “Merrily, We Roll Along.”

She’s a mix of contradictions. She displays confidence but isn’t. She may audition for the school musical, and run for school president, but she painfully aware that she’s a middle-class girl in a rich Catholic school. She’s authentic but pretends to be from richer homes; she pretends to have money. She drops one true friend for a prettier, more popular one.

Much of the movie is about relationships and reaction shots. It’s about the nothing moment that suddenly means everything. The line in the women’s room is taking forever? OK, me and my friend will barge into the men’s room, giggling, and bang open a stall where ... fuck, there’s my boyfriend, Danny (Lucas Hedges of “Manchester By the Sea”), kissing another boy. Lady Bird is embarrassed, furious and gone, while we (and probably she) relationship-backtrack. Oh, so that’s why she made almost every first move. Oh, so that’s why he didn’t touch her boobs. He wasn’t too Catholic, he was too gay. It also sets up one of the movie’s heartbreaking moments. In the alleyway behind her work, Danny apologizes, says he’s still trying to work through things, then begs her not to tell anyone before collapsing into her stunned and suddenly sympathetic arms.

That’s Boyfriend #1. Boyfriend #2? Kyle (Timothée Chalamat of “Call Me By Your Name)? He’s the supercool rich kid in a rock band who reads Howard Zinn and won’t buy a cellphone because it’s a “government tracking device.” He’s a privileged leftist who takes her for granted in a way Danny never did. There should be a special circle of hell for the supercool.

The key relationship in the movie is with her mother, Marion (Laurie Metcalf of “Roseanne”), which is beyond messy and complicated. It’s both seriously fucked up and beautiful. I think of the two clothes-shopping scenes. In the first, at a thrift store, they’re bickering as usual, and just when you expect a blow-up the mother holds up a find:

And whatever they were arguing about is forgotten. Not in the second scene. It’s the following spring and they’re shopping for a Prom dress. Lady Bird can’t find anything she likes amid the newer, hipper, sleeker stuff. Then she finds what she wants in the traditional: a pink, frilly prom dress. She looks great in it. Mom: “Is it ... too pink?” Lady Bird’s face, her whole body, her whole life, seems to crumple, but Mom won’t let it go. She doesn’t let go. She strives and pushes for perfection. She makes the bed in the motel, can’t abide her daughter’s messy room. She’s a clinical psychologist who’s got low-grade OCD and can’t stop.

“You both has such strong personalities,” says Larry, Lady Bird’s father, played by playwright Tracy Letts.

Larry is the opposite, the nurturer, the “let it be” guy. Lady Bird wants to be dropped off a block from school? That’s fine. He’s a sweetheart who reminds rather than insists. “You going to run to a horn honker?” he asks, almost amused, on prom night, when Kyle can’t be bothered to leave his car. She is, but when Kyle and Jenna (Odeya Rush), the pretty, popular one,  decide they’re too cool for school prom, she abandons them for her real best friend, Julie (Beanie Feldstein, Jonah Hill’s younger sister) and then prom. From the first scene, Lady Bird is forever ditching cars.

We do when the lights go up. It’s that kind of movie. There’s not a false moment. Anyone who had dry eyes after Marion's airport scene isn't paying attention. I’m ready to see it again.