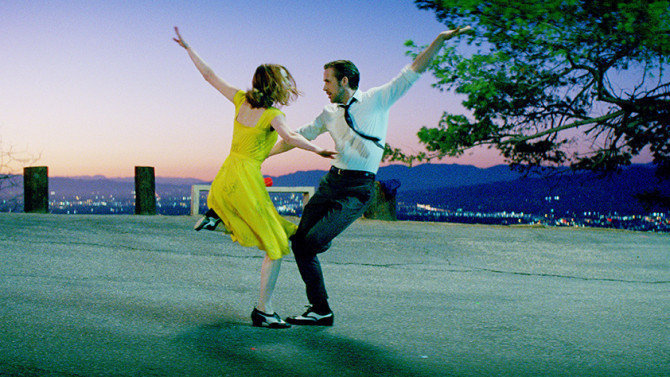 Damien Chazelle’s “La La Land” has a romantic view of love and L.A. but not necessarily life. It knows there are barriers between where we are and where we want to be, and to cross those barriers sacrifices have to be made. That’s why the dream sequence. In the end, we get a 10-minute version of the story we’ve just watched in which all the endings are Hollywood endings. Then it cuts back to reality.

Here’s a question: Why don’t they get each other? Why do they break up? Beyond the barriers, I mean.

You could say it’s because of a stain on the ceiling. Or because Mia is kind of a jerk.

Mia = My
Am I the only one who feels this way? I love me some Emma Stone but Mia bugged me throughout.

The movie is about the four seasons of a relationship. Our lovers start out cold to each other (winter), then thaw (spring), then it’s hot (summer), then, no, things begin to go cool off, and small things break apart (fall). Then winter again: It’s five years later and she’s married to someone else with a 2-year-old daughter.

It’s a movie steeped in movie lore. Our protagonists can’t walk a block without encountering another giant mural of Marilyn Monroe and James Dean and Charlie Chaplin. Never thought how odd this must be for struggling actors. Everywhere you go is a reminder of what you aren’t. It would be like me living in a city dominated by giant portraits of Hemingway, Mailer and Doctorow. But at least I’d live among people who knew who Hemingway, Mailer and Doctorow were.

The opening number takes place in that most L.A. of locales—a traffic jam on the freeway. We’re subjected to a cacophony of horns, curses, and different radio stations, and then, boom, it’s magical, Hollywood magical, and everyone is singing with and dancing to the same song, “Another Day of Sun.” Then as quickly as it started, it ends, and we’re back to the cacophony, and we meet our future lovers. She’s reading lines and doesn’t notice cars moving forward; he’s behind her and lays on the horn, then peels around and stares at her. She gives him a “God” look and flips him off. That’s our meet cute.

I like that but I didn’t like her. She’s put off that someone expects her to move forward in a traffic jam? How about a mea culpa?

She keeps doing this. She’s open-mouthed astonished that:

The real world keeps intruding upon the magical one. Just before our lovers are about to kiss for the first time, they’re stopped when: 1) a cellphone rings, and 2) a movie projector breaks down. (Interesting solution to the dramatist’s eternal question: How do you keep the lovers apart? Technology!) The movie they’re watching is “Rebel Without a Cause,” also set in L.A., with a big scene at the Griffith Observatory, which is where they head afterwards. It’s night, the place is closed, but they get in. We don’t even see them breaking in; they simply wander its hallways and exhibits alone, then magically, musically, ascend to the stars and dance there. Great scene.

That leads to summer of happy, bustling activity, during which he teaches her about jazz and encourages her to write her own one-woman play. Then trouble: Sebastian overhears Mia trying to placate her mother about his career. He’s talented but uncompromising, and he stares at the ceiling, at a stain there, and decides to compromise. He signs on to be the keyboardist with the band “The Messengers,” led by his former classmate, Keith (John Legend), whose music he doesn’t like. But it beats the Christmas jingles he’s been playing, right? And A-Ha and Flock of Seagulls? Anyway, the band takes off, they have money, she quits her barista job and gets ready for her one-woman show, and is forever grateful for the sacrifice Sebastian made for her and them.

Kidding. She never acknowledges the sacrifice. She attends one of their concerts and is stunned that he’s happily playing music he knows isn’t great. And when he makes time between tour dates to surprise her with a home-cooked meal, she brings it up—the crap music of The Messengers—and they get into an argument, and he accuses her of being jealous because her own career is going nowhere. And that’s it. She leaves him.

She leaves L.A., too, when her one-woman show tanks, to lick her wounds and think about a new career in her hometown of Boulder City, Nev.

Ah, but he gets a call from a casting director who saw her one-woman show, and wants to talk to her about a part in a major film. So he calls her. Kidding. He drives all the way out to Boulder City—300 miles away—to convince her to come back and read for the part. She does. She gets it. And on a bench overlooking L.A. she tells him how grateful she is. Kidding. She asks, “Where are we?,” meaning in their relationship, and he tells her she needs to concentrate on her career. They say they will always love each other but it already feels over. Because of the argument during the romantic dinner? They can’t get past that? They can’t have a little bit of fall in their summer? Or is it because the movie’s nearly over and we need a resolution?

We need the eggs
I still liked “La La Land.” I like its mix of quotidian and magical—our lovers’ first dance in the Hollywood hills; their dance and first kiss at the Griffith Observatory. I like her and her friends in different, primary-colored dresses strutting down the street on their way to a party. I like Sebastian on the dock with the fedora.

Gosling and Stone aren’t great singers. That’s one of the oddities of the concert scene, which is supposed to be tacky but still includes John Legend’s great voice belting it out. You think, “We could use more of that.” I liked their dancing more, particularly his, and I love how L.A.-drenched it is. It’s a love letter to sunny L.A. with a touch of Woody Allen at the end. Sebastian and Mia wind up like Alvy and Annie: two adults in love who have gone separate ways. It just made more sense in “Annie Hall.”