Lousy title, by the way. Why not “The Napoleon of Crime”? Or “The Gangster and the Lady Doctor”? Why not anything to do with the story?

It's a lousy movie anyway. And short. It’s the old Alvy Singer joke: terrible, and in such small portions.

“Underworld” packs a lot into its 67 minutes. An elder doctor counsels a younger doctor, Niles Nelson (John Eldredge), not to perform a risky operation, since, if you don’t do it, it’s not your fault. (Dude puts the hypocrite into Hippocratic Oath.) He’s ignored and the surgery works. Turns out the patient is a gangster, and the gang leader, Joe Gurney (Bogie), shows up at the downtown office of the young doctor to say thank you and here’s 500 smackers for your trouble. He also starts dispensing advice. Spotting Doc’s racing sheet, he says betting on the horses is a sucker’s game. Then he looks around.

“I don’t get it. A guy with a pair of million dollar hands in a dump like this. Yeah, you’re wasting your time down here. You oughta be uptown with the big dough.”

Based on the first minute, we assume the doctor will toss Bogie out on his ear. Nope. When Doc’s wife, Dr. Carole Nelson (Francis), shows up, he repeats everything Gurney said as if they were his ideas. Next thing you know, they’ve got a fancy pad uptown, but now the Doc is hooked on horses and booze. Plus he’s a lazy bastard. When Gurney calls with another favor, he’s ready to bow out until Gurney gets an edge in his voice. So he goes, in the middle of the night, to pull another slug out of another body. Except now the cops are watching, and they come in blasting. Goodbye, Doc. Don’t have to worry about his story no more.

So it becomes her story. It become melodrama.

It’s odd what slips through the Hays/Breen Office in these Production Code movies. The cops in particular come off badly here. Not only do they kill the Doc while letting all the other gangsters get away, they then give the third degree to Carole. She keeps saying “Ask my husband” until they finally let her know, sorry, we already killed him. Oh, we’re also going to charge you with crimes based on no evidence. The public wants a show, the DA says, “and they’re going to get it.”

The press isn’t much better. 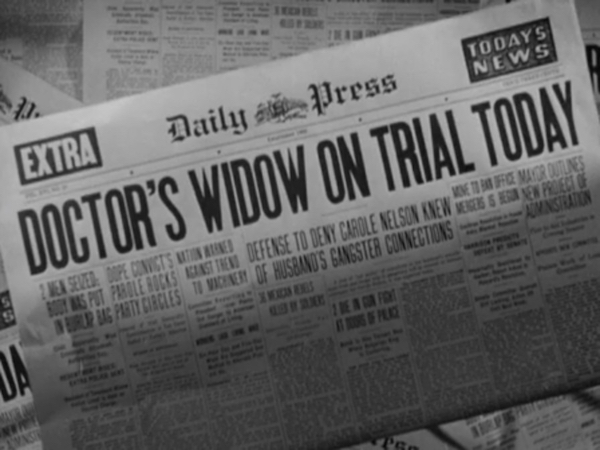 It’s as if she’s not a doctor herself.

She’s acquitted, of course, but her name is besmirched; so when she hears Gurney’s gang has been seen near the town of Wayne Center, NY, she decides to set up shop there. I guess she hopes to run into him and clear her name? Anyway, with Aunt Josephine (Jessie Busley), who veers between comic-relief fearful and brassy, she takes on some of the small minds of the small town—such as the established, elderly doctor who doesn’t like the competition—but mostly she fits in. The local grocery guy has her back, for example.

As for Gurney? He and his men are driving along when their tire blows out. Or was it shot out? And who’s that guy in the woods, standing and smiling benevolently? Obviously a tire blower-outer! No, he’s just that staple of 1930s cinema: the literary British love interest (cf., Leslie Howard). This time it’s Bill Stevens (James Stephenson), a smart, affable and self-effacing author. Also down-on-his-luck. Wait, isn’t that like exactly Leslie Howard in “Petrified Forest”? I’m sure some Warner Bros. exec said “Hey, get Bogie another Leslie Howard. That worked before.”

Stevens happens to be a Napoleon scholar, and that just happens to be the historical figure Gurney is fixated on, so he becomes pals with him. Then he asks Stevens to write his autobiography. Stevens tries to tell him the difference between bio and autobio and we get this nice exchange:

Stevens: What you want is a ghost writer.
Gurney: Nah, no mystery stuff. Just plain facts.

In the end, Carole saves the day with her smarts. Gurney has an infected eye so she gives him, and his men (and Stevens), eyedrops that temporarily blind them—just as the feds show up. Most of the men give up, but not Gurney. Blinded, he stalks Carole and Stevens throughout the house, with Carole protecting the blind Brit. Gurney gets his from the local sheriff. Then more good lines:

Gurney (dying): I guess … you’ll have to finish my book without me.
Stevens: The finish was written long ago.

The best of Seilers
Is this my first Kay Francis movie? She’s fine, just … pristine. Under glass. Did she really work at Warners?

One of the comic-relief dudes in the gang—who isn’t that funny—is Charley Foy. He wound up narrating “The Seven Little Foys,” with Bob Hope playing his father, in 1955. Though he lived another 30 years, it’s his last credit.

The director is Lewis Seiler, who directed quite a few movies in his day (1920s-1950s) and not many winners. On IMDb, if you sort his feature films by rating, the first is a 1928 film he co-directed with Howard Hawks, and the second is a 1929 film called “Girls Gone Wild,” which probably got elevated by the recent adult entertainment franchise. The most famous Seiler-directed film is probably “Guadalcanal Diary.” He took very little interest in this film, according to IMDb. “According to various cast members, he would show up to set and start blocking scenes without having read the part of the script that was to be shot on that day.” It shows.

Meanwhile, the screenplay was adapted from a story by W.R. Burnett, who helped begin the gangster cycle with his novel “Little Caesar” in 1929, and then helped remake it with his novel “High Sierra” in 1941. He and John Huston helped adapt the latter one for the movies, and the star of this one became the star of that one. It changed Bogart's image, his career, his life.