Just when the world is at its darkest, a hero arrives to save the day.

No, not Superman. And not Batman or Wonder Woman, either. I’m talking Joss Whedon.

Last year, Warner Bros. tapped him to salvage one of its most valuable franchises (this one) from the idiotic clutches of Zack Snyder—the director forever putting adolescent style over mindless substance. Snyder favors gloomy pallettes, glowering, near-naked heroes (see: “300,” “Sucker Punch,” and the new Amazonian costumes), and posing. Much posing. Forever with the pose. He seems incapable of creating any kind of logical continuity between scenes. Two of his movies have been my Worst Movie of the Year—“Sucker Punch” in 2011, and “Batman v. Superman” last year—and it’s probably only two because I began such lists several years into his career. He’s the dude who turned Batman into a raging, Fox-News-watching maniac, Superman into a limp noodle, and “WHY DID YOU SAY THAT NAME?” into one of the most laughable lines in the long, squalid history of superherodom. 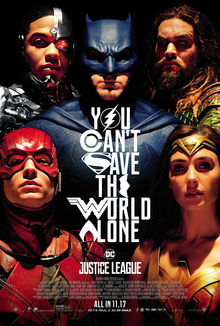 As screenwriter with Chris Terrio (“Argo”), and uncredited reshoot director, Whedon, the man behind “The Avengers," holds Zack’s worst instincts in check. We get humor. We get stabs at creating relationships between characters. Whedon and Terrio gamely try to explain away the idiocies of the previous movies: Batman’s plot to kill Superman; Wonder Woman’s 100-year absence from the scene cuz her boyfriend died.

It’s far from perfect. But I went in expecting the worst and when the lights went up I turned to the dude next to me: “You know, that wasn’t bad.”

When does this begin to suck?
The movie opens with Batman (Ben Affleck) battling a rooftop burglar (Holt McCallany). He swings around chimneys and bat-ropes the dude over the edge, forcing him to face a 30-story drop; and when asked what he wants, Batman growls, “Your fear.” OK, so I thought that line was pretty stupid. But then we discover Batman wants the fear not because he’s a dick but to attract a Parademon, a kind of screeching flying monkey-creature (created by Jack Kirby), which is attracted to, or feeds on, fear. Then they battle, Batman wins, but before he can question the demon it’s gone—poof—leaving a greasy stain on the chimney brick.

“Well, that was good anyway,” I thought.

Then a group of terrorists enter a London building, probably the Old Bailey, proceeding with the usual ruthless efficiency and mayhem. The plot? To blow up the entire neighborhood. But there’s Wonder Woman (Gal Gadot), standing boldly atop Lady Justice. OK, so I thought that was unnecessary posing. Also, how did she know about this terrorist attack? Isn’t she in Paris most of the time? No matter. She makes a great entrance by shattering the door—just obliterating it—kicks serious ass, throws the bomb high in the air (where it explodes harmlessly), then returns to deflect a hail of bullets directed at the hostages.

“Huh,” I thought. “Wonder when this begins to suck?”

I kept wondering. We’re introduced to the Flash (Ezra Miller, a standout), visiting his father, Henry Allen (Billy Cruddup) in prison. For a short scene, it’s fairly emotional. We get a cameo from Marc McClure, Jimmy Olsen from the Chrisopher Reeve Superman movies, then watch Bruce Wayne recruit Barry onto the team. The Flash is the opposite of the usual Zack hero. He’s not cool; he wears his heart on his sleeve. “Can I keep this?” he asks of the batarang thrown at his head.

Recruiting the Aquaman (Jason Momoa) and Cyborg (Ray Fisher) doesn’t go as well, and those scenes, I would argue, aren’t as good. Maybe because, unlike the Flash—who agrees to join the Justice League before Bruce even finishes the question—neither guy can see past his own self-interest and/or pain to save the world. Which feels not only unheroic but dumb. World dies, you die, idiot. Also, per Zack’s predilection, the Aquaman drinks hard liquor and hangs out in the grayest, coldest of Scandinavian fishing villages. Why not Hawaii, where Momoa is from? Why not Ko Samui? Why so serious? Also, is it a bit racist that the two holdouts are people of color, or is it just racist to bring it up? And what’s with the definite article? The Batman. The Aquaman. The Kryptonian. I get it—it sounds cool—but dial it back a bit, OK?

All of which points to a structural problem with the movie that even Whedon can’t solve: We’re introduced to too many characters at the same time. By the time “The Avengers” was released in 2012, four of the six (Iron Man, Hulk, Thor and Captain America) had already starred in their own movies/origin stories, while the other two (Black Widow, Hawkeye) had extensive cameos in those films. Here, three of the six are basically introduced for the first time. So the movie has to simultaneously explain who they are while moving the plot forward. The backstories of both Aquaman and Cyborg wind up getting short shrift. Maybe deservedly.

The plot forward is fairly dull business, too. Supernatural badguy with horns and a rock ‘n’ roll name (Steppenwolf: voice and motion capture by Ciarán Hinds), wants to take over the world by ending it. Apparently in ancient times he nearly did this by bringing together three power sources, called “Mother Boxes,” which would create “The Unity,” which would turn Earth into a hellish landscape. (Shades of Zod’s plot in “Man of Steel.”) But Steppy was beaten back by three other power sources: the Amazonians, the Atlanteans and Man. Afterwards, they each hid a Mother Box to make sure it wouldn’t happen again. Well, “hid.” The Amazonians kept theirs on display in a temple, and the Atlanteans in a temple under the sea. Only Man buried the mother.

Why is Steppenwolf returning now? Because the Kryptonian was killed in the last movie, creating a power vacuum on Earth. Which explains but doesn’t. In Steppenwolf terms, Superman’s only been here a short while. So why not return in 1848? Or 1492? There’s a suggestion that without Supes, many on Earth are suddenly fearful, and Steppy and his Parademons are attracted to fear. But fear compared with ... World War II? The Cuban Missile Crisis? C’mon.

What’s interesting about the post-Superman world, though, is how similar it is to our own: white racists filled with hatred attacking immigrant shop owners. For a major studio franchise flick, that’s not bad political commentary. What’s the ascendancy of Donald Trump like? It’s like the death of Superman. It’s that fucking sad.

Superman returns
Of course, Superman is brought back to life because the JLers need him to defeat Steppenwolf and the studio needs him to make billions of dollars. Batman, et al., take his undecayed corpose, dip it in some Kryptonian waters, turn on the third Mother Box, and have Flash jolt it with lightning at just the right moment.

And oh shit, it’s angry! (Love the “Pet Cemetery” reference from the Flash.)

During the subsequent battle at Heroes Park, Supes seems close to killing Batman, but Bats go to Plan B—bringing in Lois Lane (Amy Adams) to restore his humanity. Which raises the question: Why wasn’t that Plan A? And seriously? Clark is dead, too? With a gravestone and everything? Someone's gonna have some splainin' to do. Imagine the Smallville conversations: “Hey, isn’t it weird that Clark Kent and Superman died at the same time, and then both came back to life at the same time? That just seems like a pretty weird coincidence to me. Also, isn't Superman’s girlfriend forever hanging out at the Kent house? And don't Clark and Superman kinda look alike except for the glasses? OK, can we just stop this fucking charade already? How dumb do they think we are?”

But even with Lois, it takes a while for Supes to come around. First he has to fly to Smallville, to the Terrence Malicky wheatfields there, and have several conversations with Lois and his mom (Diane Lane). Meanwhile in Russia, the world begins to burn. That’s where Steppenwolf is creating the Unity and a hellish landscape. (Seriously, I long for a good actor in a grounded supervillain role—like Ian McKellan as Magneto or Alfred Molina as Doc Ock. Enough with the space operas already.)

I’m glad they didn’t draw out the final battle too much. Once Superman returns, he and Flash vacate the civilians (including that one annoying Russian family that’s supposed to represent all of humanity or something); then he and Cyborg pull apart “the Unity” (we get a humorous line from Supes even if it feels contrary to his entire character since “Man of Steel”); then Supes freezes Steppenwolf’s sword while Wonder Woman slices it to bits. Weapon gone, Steppenwolf grows afraid, and the Parademons sense this and feed on him. Nice little irony—even if you figure Steppy should’ve worked out safety protocols on that centuries ago.

“Justice League” still has problems beyond those already mentioned. How does Batman know about the Parademons? Why are they kidnapping civilians again? How come the Amazonians haven’t progressed past arrows, swords and horses? And the CGI to remove Cavill's moustache during the reshoots just doesn't work. We also get way too much flirty talk with Wonder Woman, which sounds particularly bad post-Weinstein. The whole thing is a mash of Whedon’s light touch and Zack’s heavy hand, so expect unevenness.