The trailer looked pretty good, but then Hollywood is rife with movies that work as trailers but not as movies. The director of this one, Jake Kasdan, son of Lawrence, is notorious for just that. His oeuvre:

With “Jumanji: Welcome in the Jungle,” Kasdan finally has something more than a trailer.

Who should he/we thank for this? Screenwriters Chris McKenna and Erik Sommers, who worked together on “Community” and “American Dad,” and who this year made the leap into film with “LEGO Batman,” “Spider-Man: Homecoming,” and “Jumanji”? Dwayne “The Rock” Johnson, the world’s favorite action hero? Johnson and Kevin Hart, who continue to make a fantastic on-screen duo?

I’d say it’s whoever decided that board games were out, video games were in, and for god’s sake, make the kid the avatar.

And the nerds shall lead 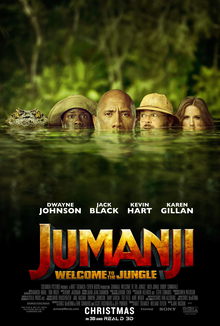 Confession: I never watched the first “Jumanji.” Wait. Worse: I began it and stopped. Robin Williams did a kiddie version of his “Fisher King” role, every roll of the dice released chaos, and the backstories (1969, 1995) were convoluted and weepy.

This one begins where that one ends, with the Jumanji board game on the beach in 1996. It’s discovered, not by French girls, but by a jogging American dad (Tim Matheson), who brings it home to his teenage son, Alex Vreeke (Mason Guccione), who dismisses it out of hand. He’s into video games. When the game senses this, it simply transforms itself into one. Sure, why not? Alex chooses an avatar, begins to play, and gets sucked in.

Cut to: present day. Spencer (Alex Wolff) is a nerdy Jewish kid who is helping out his estranged childhood friend, now All-Star jock, Fridge (Ser-Darius Blain), by writing history papers for him. Bethany (Madison Iseman) is a social-media- and selfie-obsessed beauty queen who FaceTimes during class, while Martha (Morgan Turner) is ... uh ... what exactly? Shy? Dismissive? Basically she seems like a normal teen. All four get detention (the boys for cheating, the girls for sass) and are told to clean up the school’s cluttered basement. That’s where they find the Jumanji video game.

(Question: How did it get there? The Vreeke place is now shuttered, and the dad, who couldn’t handle the disappearance of his son, is the town nutjob. But someone, at some point, had to move the damn game. Did Dad give it to the school charity? And no one else ever tried to play it? Something for the DVD commentary, I guess.)

These kids, of course, do play it, and become their avatars:

Basically, the nerdy kids become powerful and are played by action heroes, while the popular kids become weak and are played by comedians. Each is still him or herself (Bravestone flinches at squirrels) but with the power of the avatar (Oberon is the only one who can read maps). And off they go, pursued by wild animals and biker dudes, to get a jewel, the Jaguar’s Eye, that the evil Van Pelt (Bobby Canavale) stole years earlier, and return it to the jaguar statue so the jungle can be restored. Or something.

It’s both fun and funny. The Rock plays off his WWE persona (eyebrow raise, smolder, “Rock Bottom”), Kevin Hart plays off his little-man-with-big-mouth persona, and Jack Black channels his inner beauty queen. Eventually they hook up with Alex, whose avatar is Seaplane McDonough, and who thinks he’s been in the game for a few months—not 21 years.

Each avatar gets three lives, represented by three bars on their arms; when they lose one (eaten by a hippo, pushed off a cliff), they lose a bar. And when they lose all three? The assumption—theirs and the movie’s—is that they die. Not just the avatar. Them. But it’s just an assumption. Maybe they lose that third bar and—whoosh—they’re out of the game, and back as themselves. Who knows? Something else for the DVD commentary.

Popcorn machine
It’s a shame the movie didn't go a bit deeper. Our five are literally living Atticus Finch’s edict to walk in someone else’s skin, but the lessons they learn are basically: 1) appreciate one other; 2) work as a team; 3) take risks. I often found myself drumming my fingers during these scenes. And couldn’t we get better commentary on/satire of the gaming world? Van Pelt, for example, feels more movie villain than video-game villain.

That said, it’s a good popcorn movie with a bit of heart. I liked the moment, for example, when Alex/Bravestone is feeling cautious because he’s down to just one life, and Fridge/Finbar tells him, “That’s all we ever get.” Or at the very end, when grown-up Alex (Colin Hanks) introduces our four to his daughter, Bethany, and says, “We named her for the woman who saved my life.” I actually got a little verklempt there.