If you’re going to do a revenge flick, a puppy and a ’69 Mustang are good reasons to seek it.

I’d been hearing about “John Wick” for years, the chorus growing louder as the box office receipts to its sequels grew larger: from $43 million for the first, to $92 for the second, to, this year, $171.

It’s certainly atmospheric and moody—but not crushingly so. It’s got a light touch and even vague humor. The Continental Hotel, for example, which is owned by Winston (Ian McShane of HBO’s “Deadwood”) and run by the impeccable Charon (Lance Reddick of HBO’s “The Wire”), is not just a landing spot for criminals on the run, a “safe place,” as it were, where no one can do business on the premises; it’s almost otherworldly. Particularly from Reddick, you get an Overlook Hotel vibe. 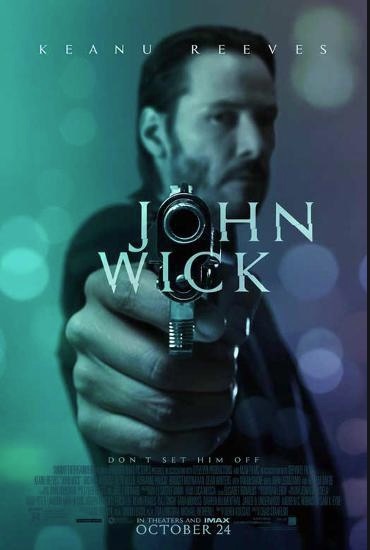 The whole thing, of course, is otherworldly in the way of Hollywood crime/gangster movies. These people live in a world not like ours. You take care of 12 assassins in your house, calmly make a “dinner reservation” for 12, and superefficient cleanup men arrive to remove the evidence. Cops are not a factor. The rule of law is not a factor.

What these men have instead of the law is a code. “No business at the Continental” is just one aspect of it. It’s throughout. Who do you trust? And who are the ones who just get sloppy?

You don’t tug on Superman’s cape
First to get sloppy is Iosef Tarasov (Alfie Allen of HBO’s “Game of Thrones”), son of Russian crime boss Viggo Tarasov (Michael Nyqvist of “The Girl with...” movies). He’s at a gas station, sees John Wick (Keanu Reeves) filling up his ’69 Mustang, asks about it, offers to buy it. Not for sale. But he doesn’t leave well enough alone. He insults him in Russian but John knows Russian and answers in kind before driving off. But Iosef still doesn’t leave well enough alone. He and his two doofus friends break into John’s home in the middle of the night, kill his puppy, steal his car, but they leave him alive.

Quick question: How do they find out where he lives without finding out who he is? Because who he is is the main thing. These guys thought they attacked Clark Kent, and I assumed they’d realize, by and by, no, they attacked Superman. But it’s not by and by. Everyone tells them: Hey, fucksticks, that was Superman! Then everyone waits for Superman to crash through the wall.

I missed the by and by of it, to be honest. I like the dawning realization.

Wick isn’t just Superman but a grieving Superman. He was once assassin for Viggo but asked out to marry the love of his life, Helen (Bridget Moynahan), whom we mostly see in iPhone videos and dreamy flashbacks. She dies of a disease. He’s distraught. Then he get the puppy in the mail—a final gift from his now-dead wife so he’ll have something to love again. That’s what Iosef and his friends kill.

The first to let them know who they fucked with is Aurelio (John Leguizamo), who runs an underworld autoshop. They want new VIN numbers, etc., for the ’69 Mustang, but he recognizes it, asks where they got it, then decks Iosef and orders him out of his shop. Aurelio lets Viggo know. Then Viggo lets his son know.

Does Viggo have more honor than Iosef or is he just smarter? Viggo knows his son is in the wrong but it’s still his son. So the 12 assassins. Nope. Then a $2 million bounty, which, given the stakes, seems skimpy. Why not $100 million since you stand to lose everything? Eventually Viggo hires Marcus (Willem Dafoe), a sniper, whom we first saw in that most clichéd of action-movie scenes—at the outskirts of a funeral holding an umbrella in the rain. Marcus takes the money, follows Wick around, but he’s more guardian angel than assassin. He uses rifle shots to alert John or take down enemies. He’s got a code, too.

One who doesn’t have a code? Another assassin, Ms. Perkins (Adrianne Palicki). She attacks John in his room at the Continental, but he gets the upper hand and leaves her with a colleague, Harry (Clarke Peters of HBO’s “The Wire”); then she gets the upper hand on Harry. I like how we assume she’ll be the assassin trailing John for the rest of the movie, as in James Bond, but they don’t even have a final confrontation. Winston takes care of her. She didn’t follow rules.

All of this makes me think a littlel of Don Corleone: “Women and children can be careless but not men.” This movie is playing into that. It’s wish fulfillment for older men, really. The young are idiots who play video games and trash talk, while women don’t have a code or don’t follow it. They’re careless. Real men are older, talk little, and drink bourbon. They do their job and got your back and clean up the mess.

Like ‘Ip Man’ but not
Apparently a lot of thought went into the fight choreography. I couldn’t pause without Amazon Prime informing me, via IMDb, that in this fight Keanu uses this martial arts style while his opponent uses that one. But it ain’t Hong Kong. There’s little beauty in it.

There is, however, a purity and simplicity. Like in “Ip Man,” which reduced the kung fu flick to its essence, “John Wick” does the same with revenge fantasies. There’s not much that’s extraneous.

Did I enjoy it? Not really. It’s not my thing. Guns aren’t my thing, nor the Russian mob. Look at the poster above. Keanu isn't in focus, the gun is. That pretty much tells you everything you need to know.