Dawn Porter’s documentary, “John Lewis: Good Trouble,” is a celebration of the life of the civil rights icon and a warning that his life’s work is being undermined in the wake of the U.S. Supreme Court’s Shelby County v. Holder ruling. It chronicles his rise from an obscure farm in Troy, Alabama and onto the world stage, gives us his greatest hits from 1960 to 1965—Nashville sit-ins, Freedom Rides, March on Washington, Selma—and follows him around during the 2018 midterms as he campaigns for Democratic candidates in Texas and Georgia. Post-credits, we also get a Covid-era Q&A conducted over Zoom between Lewis and Oprah, which is like a master class in interviewing. Seriously, if you’re interested in journalism, watch it and learn it. She keeps going back, keeps politely digging, trying to find something new and deeply felt beyond the stories that have long been memorized and memorialized. 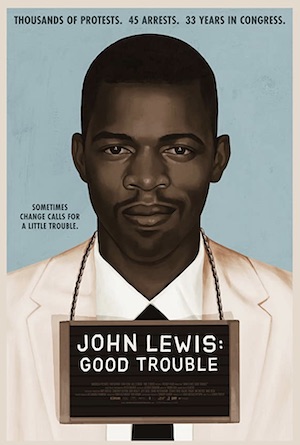 She even asks the very question that I wanted to ask Lewis, but lacked the courage to do so, when I saw him on a book tour in 2000: “After facing all of the dangers you’ve faced, what can possibly still frighten you? What are you still afraid of?”

It turns out: Nothing. Here’s the exchange:

Oprah: You talk about losing your fear at that moment on the Edmund Pettus Bridge. I want to know if you lost it forever and from that day forward you became a fearless warrior for civil rights? Or have there been times when the fear was there and you just used your bravery and courage to move forward? Did you lose your fear completely or were there days where you still felt it?

Lewis: I lost my fear.

Lewis: On that bridge, I thought I was going to die.

Oprah: Can you pause right there? I’ve heard you say that before. What does that feel like? When you think you’re going to die?

Lewis: Well, Oprah, I had what you call an executive session with myself. I said, “This is it. I’m going to die on this bridge.” And I thought others was going to die. And somehow, in some way, maybe history intervened or God almighty kept me. And I’m glad he kept me.

Oprah: But in that moment, when you’re thinking you’re going to die, are you also thinking, “But this was worth it”?

Lewis: Oh, I thought, along the way, if I have to do more than shed some blood, and I must die, this is worth dying for.

Lewis: [Here gets emotional.] My own mother, my own father, my uncles and aunts, my teachers, could not register to vote. So I had to do something. I had to bear witness to what I felt was the truth.

I’ve interviewed tons of people in my career and I’ve long known that you can ask the best question in the world and get bupkis, and then some offhand comment will bring up the most fascinating vein of material. I don’t know if Oprah’s small, sympathetic “Mm” elicited that emotion from Lewis, or if it was the follow-ups she was asking, or if he was going there anyway. But he got there. I think with her help.

The boy from Troy
My wife and I watched the doc the weekend after Lewis died from pancreatic cancer. It had been released a few weeks earlier, and in better times he might have been at its premiere, thin and hobbled, but these aren’t better times. So the doc was simply released online without much fanfare; and there it was the weekend after he died.

It could’ve been tighter. I think we get too much in 2018—maybe a little too much back-and-forth with his chief of staff, Michael Collins, as they josh about Michael not knowing that Texas grew cotton, or about all the kisses Lewis received from the ladies at the local church. Sometimes the joshing veers into uncomfortable territory, as if the two are a long-married couple getting on each other’s nerves. I guess that’s kind of fascinating but it still made me uncomfortable.

I like the scene of Lewis voting in the 2018 election at his local polling place: looking around, admiring the turnout. Made me think of all the other times he voted in midterms when there were no cameras following him and the turnout wasn’t so good. Did he ever wonder, “I got my skull fractured for this?” But that wouldn’t be him. And anyway 2018 was different, 49.3% turnout, the highest for a midterm since 1914. In that campaign, we see him stumping for Colin Allred, who wound up defeating Pete Sessions 52-46, and Lizzie Fletcher, who turned Texas’ 7th district blue for the first time since 1967. The House turned blue. The Congressional black caucus wound up with a record 55 members.

We also seem him campaigning for Stacey Abrams for Georgia governor, and Beto O’Rourke for the U.S. Senate. On election night we hear him say, “I’m so sorry about Stacey and this kid.” This kid. Love that. We get about 10-15 seconds of Beto here, and it’s so electrifying it makes you wonder what might’ve been. If he’d won the Texas seat, would he be the Democratic candidate for president now? Maybe. But he lost, narrowly, and every week or so Ted Cruz’s stupid head pops up on my Twitter feed to provoke or prevaricate while the world crumbles.

The Abrams loss was worse because it points to voter suppression—the very thing Lewis spent his life fighting. The doc gives us some of the sad post-Shelby County numbers:

I know the weak GOP arguments for the first two, but is there any argument for closing polling stations? Making people stand in line for hours and hours to participate in a constitutional right? How does that help democracy?

Interspersed with all this is black-and-white footage from the march toward those voting rights the GOP is now curtailing. A lot of the footage I’ve never seen before. A lot of  the footage John Lewis had never seen before. That’s what he says to the camera: “Dawn, I’ve seen footage I’ve never seen before.” Maybe I saw some of it back on the “Eyes on the Prize” days? Did they show Rev. James Lawson’s non-violent workshops in that doc? Or Lewis and his roommate Bernard Lafayette talking by a creek about how they were involved in the protests despite the concerns and fears of their parents? Or Lewis speaking at the March on Washington, and extolling the crowd, “Wake up, America, wake up!” while Bayard Rustin, a cigarette dangling from his mouth, hangs behind him?

Lewis didn’t have Martin Luther King’s voice—who did?—nor his words. What did he have? He was a slight kid with a childhood stutter and a thick Alabama accent who had the quiet courage of his convictions. That was it; that was his superpower. He was literally willing to die for the cause. He was also handsome. I always thought so anyway. A bit of nerd, too, standing there on the Edmund Pettus Bridge with his backpack on over his tan overcoat. The other day I saw photos of Lewis at a Comicon a few years ago, after the graphic novel, “The March” came out, and cosplaying as his younger, iconic self: tan overcoat, backpack. Beautiful.

What happened after SNCC sloughed him off for rabble-rouser Stokely Carmichael in 1966? We don’t get that story much. We do here. He went to Mississippi with Julian Bond to register people to vote. He was gaining weight and losing his hair by then. He worked in the Carter administration—although doing what we never find out—then became a city councilman in Atlanta. And in 1986 he ran for the U.S. House from Georgia’s 5th District. Against Julian Bond. I had no idea. I know a lot about Lewis but I had no idea about this. (I guess I don’t know a lot about Lewis.) And though Bond was tall and handsome, and better known, Lewis won in an upset. He brought up a Reagan-era issue, drug testing, and was willing to take one, and Bond wasn’t, and maybe that tipped the scales. It probably did with their friendship. Bond never ran for public office again, while Lewis kept representing the 5th every day until July 17, 2020. 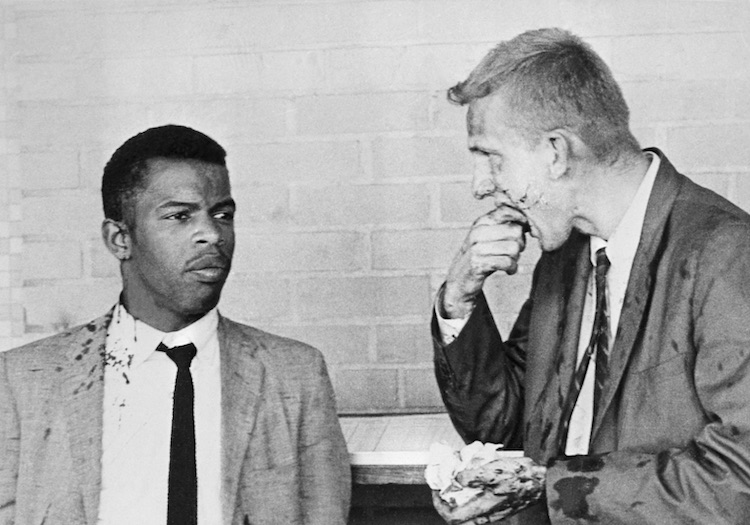 Everybody’s hero
Lewis has long been my hero—I’ve written about that to the point of boredom—so it was great finding out that he was everyone’s hero—or at least that part of the public that cares an iota about our history. We get shots of him walking through an airport in 2018 and everyone stopping him to shake hands, get pictures taken. We hear stories about being in a Ghanaian marketplace and shouts being heard: “John Lewis!” Or from an Egyptian cabdriver. The director asks … one of his brothers? ... or Congressional staff? I'm not sure. I apologize. But she asks what’s it like walking through an airport with Lewis. After a pause, he deadpans, “Tedious.”

Some of the celebration of Lewis here, his indispensability, comes across as ominous in the wake of his death. Listen to these quotes knowing he’s gone:

One of his last acts in the House was introducing and urging passage of the new voting rights act, HR1, “For the People Act,” whose purpose is to “expand Americans' access to the ballot box, reduce the influence of big money in politics, and strengthen ethics rules for public servants.” The House passed it and sent it to the U.S. Senate in March 2019. It hasn’t left Mitch McConnell’s desk. A newscaster in the doc tells us “Senate Majority Leader Mitch McConnell says the Senate will not vote on HR1,” and he’s been true to his word. It's as if racists don’t need armed state troopers anymore. They have Mitch McConnell.

The title comes from Lewis’ main stump speech: “My philosophy is very simple: When you see something that is not fair, not right, not just, say something, do something! Get in trouble, good trouble, necessary trouble!” “Good Trouble” is like that. It's a good doc, a necessary doc. We should all watch it. Listen to his words and translate them to our era. What’s going on in this country post-Shelby County? Let’s say something and do something. At the least, let's do what John Lewis’ own mother and father, and his aunts and uncles, were prevented from doing most of their lives: vote. 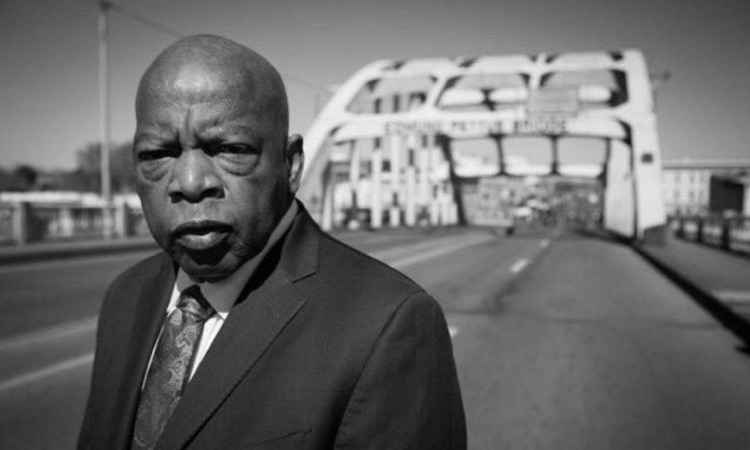