“Jiro Dreams of Sushi” is an inspirational movie but not in the way most movies are inspirational. Most movies, if they inspire us, inspire us to dance, to fight, to do whatever the protagonist is doing. “Jiro,” the documentary, and Jiro, the man, inspire us to keep plugging away at whatever it is we’re doing.

“Once you decide on your occupation you must immerse yourself in your work,” Jiro Ono, the 85-year-old master sushi chef tells us early on. “Never complain about your job. You must dedicate your life to mastering your skill. That’s the secret of success.”

At least that’s the secret to his success. Which , thanks to documentarian David Gelb, isn’t much of a secret anymore.

“Only one can be best; I buy that one.”
Jiro’s been working with sushi for 75 years. He’s called an artist, a symphony conductor, a maestro. He runs a nondescript countertop restaurant that seats eight in a Tokyo subway; but it’s a two-month wait to get a seat for a sushi meal that costs Ą30,000. (About US$369.) His is the only counter joint that has a three-star Michelin rating. 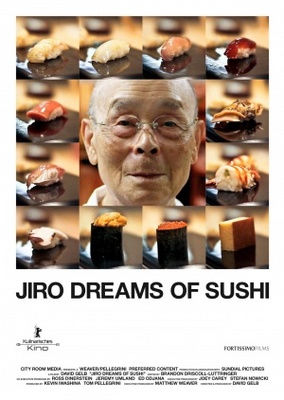 Other sushi chefs tremble in his wake.

And he hasn’t perfected it. He’s still working at it. Hell, he works at it at night. He dreams of sushi. Thus the title.

We watch his methods in action. His sushi is bought fresh every day. He buys only the best tuna, only the best rice. Most octopus tastes rubbery so Jiro has his octopus massaged for 45 minutes. It used to be 30 minutes but he kept improving it. “If 10 tuna are for sale, only one can be best,” says his tuna guy. “I buy that one.” Then Jiro buys it from him.

He strives for simplicity and balance: just the right wasabi, the right sauce, the right pressure—like holding a baby chick—as the sushi is assembled. He used to serve appetizers but no more. He wants nothing to get in the way of the flavor of the sushi. The meal ends with tamagoyaki, a kind of small omelet, and we hear an apprentice talk about how he was finally allowed to make the tamagoyaki after 10 years of service. Even then he made it wrong. Only after 400 tries did Jiro nod and tell him he’d succeeded. That success, he said, made him want to cry.

Sacrifices are made, obviously, but one gets the feeling Jiro doesn’t see them as sacrifices. “Jiro dislikes holidays,” says Yamamoto, a food critic prominent in the documentary. “They are too long for him.” One of Jiro’s sons recounts how, when he was a small boy, he saw his father sleeping on the couch and called to his mother about the strange man sleeping in the living room. Does Jiro regret it? So little time spent with his kids? We’re not sure. His mask in this regard is old-school and inscrutable. “I wasn’t much of a father,” he admits, but adds, “I let them graduate high school.” How nice. Both sons are now in the family business. The eldest, Yoshikazu, 50, fetches the fish at the morning market on his bicycle and basically runs things. The youngest, Takashi, knowing the restaurant would be bequeathed to Yoshikazu, started his own sushi place at a nearby mall. Both are successful men but both live in Jiro’s long shadow.

That’s part of the drama of the doc: What’s it like to follow in that wake? A former apprentice sympathizes with or pities Yoshikazu. How awful to not have your own place at 50, he says. How awful to live in that shadow. He doesn’t think Yoshikazu will ever get out from under it. “Jiro’s ghost will always be there, watching,” he says. But Yoshikazu seems less haunted than this former apprentice. Indeed, at the end of the doc, we’re informed that when the Michelin food critics were served, it was Yoshkazu serving them. It was his sushi that earned the three-star rating.

Whither Anvil?
The doc has holes. What did Jiro do during World War II? What did he think? Do we see his wife? Is she mentioned? Is she alive?

More, the secret to Jiro’s success—find the thing, keep doing the thing, keep perfecting the thing, until you die—are justified because, well, he’s a success. There is reward for his hard work. There’s recognition and honor and customers. There’s this doc. But how was he recognized? How did it become known that his was the best sushi in Tokyo, in Japan, in the world? We don’t get that. How long did Jiro toil without recognition? And during this time, did he have doubts? Did he ever feel like he was wasting his life focusing on this one thing?

In this way, Jiro’s story feels like the flip-side of Anvil’s, those middle-aged, Canadian, heavy-metal rockers profiled in another excellent documentary, “Anvil! The Story of Anvil,” from 2008. Those guys kept doing the one thing, perfecting the one thing, but, after a time, they were no longer able to make a living at the one thing. They had their fans, almost like a cult, but never broke the way you need to break. They kept on but they had to get other jobs, and struggled, and kept trying to break through at an unseemly age. You left the theater wondering whether they were inspirational or delusional. You left feeling slightly sick to your stomach.

You don’t wonder this with Jiro. The mood of the doc is of a life well-spent rather than a life wasted. The soundtrack is classical, Tchaikovsky’s Violin Concerto in D Major, Opus 35, rather than hair metal. It feels timeless and proper. I’m sure Jiro is a better artist with sushi than Anvil is with music. I wouldn’t be surprised if he tried harder, too, and gave up more. But the secret to his success isn’t necessarily a route to success for others. Doing the one thing, over and over, guarantees nothing.

“Jiro Dreams of Sushi” is still worth seeing. It’s a tonic for a certain kind of American moviegoer like me, since it celebrates patience, and experience, and the pursuit of perfection. It celebrates things that are given merely lip service in my increasingly loutish and cruddy country.