Is Jason Bourne (Matt Damon) the ultimate American hero? He certainly encompasses all of the themes in movies about America’s ultimate spy agency, the CIA. He is:

This last is the most important. Americans want safety, particularly post-9/11, but we don’t like being underhanded. This dilemma was first articulated by Alan Ladd in the first movie about America’s first spy agency, “O.S.S.,” in 1946:

“Americans aren’t brought up to fight the way the enemy fights. We can learn to become intelligence agents and saboteurs if we have to. But we’re too sentimental, too trusting, too easy-going....”

We want safety and innocence. David Bowie once asked of young Americans: “Do you remember the bills you have to pay? Or even yesterday?” Nope and nope, America says over and over again. Iran? Guatemala? Chile? Iraq? Whatevs. 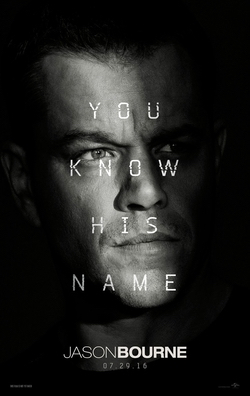 Which is why Jason Bourne is America’s ultimate hero. He keeps America safe by killing our enemies; then he keeps us innocent by forgetting all about it.

What a tangled Webb we weave
So after nine years, he’s back, directed by the same guy (Paul Greengrass), and involved in the same kind of storyline.

As the assassin, in the first act of “Supremacy,” killed Franka Potente while aiming for Bourne, so, in the first act here, the assassin aims for Bourne and kills longtime Bourne ally Nicky Parsons (Julie Stiles). Bourne’s raison d’été has always been to find himself, and last time around he did: Hello, David Webb! This time? Yeah, he’s still trying to find himself. Just more of himself.

That’s why he meets with Parsons. As the movie opens, she hacks into the CIA’s mainframe computer and downloads intel on various CIA black ops, including: Operation Treadstone, which created Bourne; Blackbriar, which replaced it; and Iron Hand, the new one, which turns out to be a mass surveillance program: spying on everyone, everywhere. She plans to go public with this, but sentimental, or maybe in love (the movie doesn’t pursue her motivation), she also downloads extra intel on Bourne—about his past, about his pops—and delivers that first. Bad move. Pow! Nicky, we hardly knew ye.

If there’s a new thing in the movie, that’s it. The last time we saw Jason Bourne, in 2007, Facebook had only 50 million users, barely anyone knew Julian Assange, and no one had heard of Edward Snowden. Here, Snowden is name-checked twice, Assange gets a Berlin counterpart, while Facebook is fictionalized into “Deep Dream,” a social media site run by Aaron Kalloor (Riz Ahmed), who—oops—got his initial funding from the CIA. (Would that our spy agencies were so farsighted.) Now the CIA, or at least Tommy Lee Jones, wants the data, but Kalloor is having second thoughts. He wants to do the right thing, which is protecting individual privacy against government intrusion. The corporate right to monetize our private data goes unmentioned.

We get three set pieces—Athens, London, and, to class up the joint, Vegas. In each, CIA techs track everything from Langley, with Tommy Lee or Alicia standing around issuing commands (“Back up a frame ... Enhance ... That’s her!”), and awaiting the imminent arrival of Bourne so he can be killed once and for all. So Bourne has to slip in undetected, do what needs doing—via fights, chases, quick cuts and shaky cams—and slip out undetected. Sadly, we’ve seen it all before. Rarely has an adrenaline rush been so yawn-worthy.

And what’s the big personal reveal? The intel that Nicky sacrificed her life for? Seems Bourne’s pops started Treadstone, but was killed by terrorists right in front of Bourne, which is why Bourne joined Treadstone. But guess what? It wasn’t terrorists that killed Daddyo, it was the CIA—specifically the Asset—because the son was the perfect candidate and the father was a doubting Thomas. So two birds with one CIA stone.

Which is pretty despicable. It also means the tiny bit of culpability Bourne felt at the end of “Ultimatum”? Gone. He’s innocent once more.

Happiness is a warm puppy
Yeah, it’s tired, and so is Bourne. His face looks like it’s seen too many fights or too many movies. Tommy Lee is in fine form, tight smiles and evil grins, but he could do this shit with his eyes closed. Vikander is lovely to look at, but she made me wonder whatever happened to the other foreign girl of the moment, Franka Potente. Bit parts in movies and TV, apparently. Hollywood slurps up and spits out.

Truly the saddest thing for me about the return of Jason Bourne is what Greengrass has him doing since 2007. He has to stay off the grid, right, so he can’t get a regular job with an SSN. So ... day labor in Ghana? Construction in Mongolia? Or using his mind somewhere in private? Nope. Greengrass went with bare-knuckled brawling in Greece. Before jeering crowds, Bourne takes out foreign monstrosities with one punch, then celebrates with booze and broads. Kidding. No booze and broads. He has the demeanor of a man on death row. There’s not an ounce of joy there.

Question: With Tommy Lee, et al., vanquished, isn’t he back to doing this? Off the grid and joyless? C’mon, Greengrass, he’s America’s ultimate hero. Get him a puppy at least.