Bummer. I was psyched for this. I mean, Ip Man in America.

And yes, in my head, I was thinking “Kung Fu,” the TV series about the Shaolin priest wandering the American West in the 19th century kicking racist ass, before I realized, wait, it’s gotta be, what, the 1960s at this point? Exactly. 1964 to be precise. But I was still psyched.

And there would be more of Chan Kwok-Kwan’s perfect Bruce Lee in it? Yes! And he actually gets into an alleyway fight with a superbeefy, chest-thumping karate champion (Mark Strange) and says a variation of the “Boards don’t hit back—but I do” line from “Enter the Dragon”? Yes again! A good antidote to the lame Bruce Lee portrayed in Quentin Tarantino’s otherwise stellar “Once Upon a Time ... in Hollywood.” 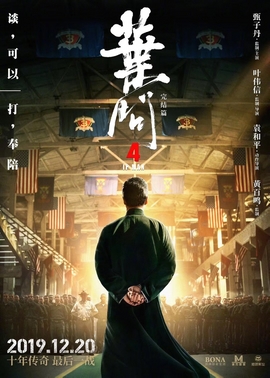 But overall “Ip Man 4” is too similar to, and not as good as, the other three. The most interesting aspect—to me—is how much of today’s xenophobic politics infuse the story. Even the lesson is one aimed at today’s more affluent, educated Chinese: Sometimes, the happiness you’re seeking can be found in your own backyard.

不乖孩子
As we open in Hong Kong, Ip Man (Donnie Yen) is dealing with a son who’s ignoring his studies, getting into fights, and not listening to his father. Ah, but the doctor treating his son’s injuries recently returned from getting his degree in the U.S.; and while before he’d been a bit of a rebel, now he’s polite, handsome and successful. Ip Man sees the answer.

(Of course, at that time, in the country now making the movie, such a move would‘ve gotten you reeducated or worse. But onward.)

All of this dovetails with an invitation from Bruce Lee to attend Lee’s famous appearance at the 1964 International Karate Championships; Lee even buys Ip Man a planet ticket. So he goes, less to see Lee than to search for a school for his son.

Most “Ip Man” movies are basically this: For the first half, fight local Chinese (who disparage wushu); for the second half, take on racist foreigners (who disparage kung fu/Chinese generally). Here, it’s once more with feeling.

The Chinese Benevolent Society of Sacramento is supposed to help Ip Man, but, led by president Wong Zong Hua (Wu Yue), they offer a cold, decidedly un-Confucian greeting to the grandmaster. They don’t like that Ip’s student, Bruce Lee, is teaching foreigners Chinese kung fu. Chinese kung fu is for Chinese, they say.

Sans the necessary introduction, Ip Man makes little headway trying to get his son into a prestigious school. (The idea of attending a public school, for free, doesn’t seem to enter into it.) Meanwhile, I was wondering who Ip Man would fight for and protect here; Bruce Lee seemed covered. Ah, but at one school, Ip runs into Wong’s daughter, Yonah (Vanda Margraf), who, in becoming a cheerleader, makes an enemy of Becky (Grace Englert), your typical mean girl with racist overtones. Becky terrorizes Yonah with like 6-8 jocks, so it’s Ip to the rescue. A not-bad scene.

Ip next fights Wang, who thinks Ip helped Becky only to get that letter, and they go toe-to-toe before an earthquake strikes and they have to help the residents of Chinatown. Then ... ? Oh right. A subplot—which really turns out to be the plot—involving a student of Lee’s, a Chinese-American staff sergeant in the Marines, Hartman Wu (Vanness Wu of the Taiwanese boyband F4), who is trying to get his outfit to take kung fu seriously. Problem? Gunnery Sergeant Barton Geddes (Scott Adkins), a pumped-up, roid-rage machine, thinks Chinese kung fu is weak, hates foreigners generally, but also, oddly, prefers Japanese karate. We see his favorite toady, Colin Frater (former U.S. Marine and martial artist Chris Collins), bullying people in the ring and breaking arms. Because Hartman Wu has the audacity to bring a Wing Chun dummy into the Marine gym, he has to fight Frater, loses, and while running extra laps sees a smiling Geddes set the Wing Chun dummy aflame. As often happens in the Marines.

The movie’s view of America—and the Marines in particular—is kind of amusing. That Hartman would bring the wing chun dummy on his own onto base? And then convince a general into considering Chinese martial arts? Going over how many heads? To prevent this, Geddes sends Frater to dispense with the Chinese martial artists at Chinatown’s Mid-Autumn Festival, where Hartman will be filming the demonstration. But Frater goes a brutal step too far and Ip Man steps into the ring. Previously, Hartman had lowered his camera in shame; but once Ip Man takes a pose, he starts filming again. Another good scene.

There’s a second subplot—ripped straight from the Trumpian headlines—in which Becky’s father turns out to be INS, and he gets revenge by arresting Wang with intent to deport. Then our subplots clang together in an odd way. Sgt. Geddes shows up at the detention facility and demands custody of Wang just so he can fight him. And Becky’s dad says sure. Because that’s how things work in the U.S.

This pretty much sets up our end. Geddes clobbers Wang so it’s up to Ip Man again. Ip Man wins.

回去中国
The fight scenes are good—choreographed by Yuen Woo Ping—if a bit over the top; but I still love the stillness and balance Donnie Yen brings to every fight. I guess I'm just tired of the roided-out, racist, rage machines: Twister in “2”; Big Daddy in “Wolf Warrior II”; three more here. They’re all the same—without anything close to nuance. All of them disparage Chinese gongfu, too. With reason? Everyone sucks at defending it except for one guy.

I’m curious: Did the success of “Wolf Warrior II” lead to this storyline? Hero travels abroad, takes on the racist Caucasian, preserves Chinese honor. And what’s with the Chinese fixation with the U.S. Marines? Leng Feng keeps talking about them in “Wolf Warrior II" while in Yen’s previous movie, “Big Brother,” he was a former U.S. Marine. Now this. Look at that Chinese poster. Tell me they’re not selling something. (Mouse over for the U.S. version.)

After Ip defeats Sgt. Geddes, Wang finally offers him the letter of recommendation but he decides “the grass isn’t always greener.” (Surely a message from the current Chinese government to educated Chinese living abroad.) Ip returns home, reconciles with his son, teaches him wushu, dies. The end. For this story. But may I suggest—yet again—Donnie Yen as Kwai-chang Caine in “Kung Fu: The Movie”? A joint Chinese-U.S. production? Wandering the American West in the 19th century and kicking racist ass? Seriously, people, how hard is it to make that happen?