I know very little about business and economics but I knew a lot of the information in “Inside Job,” Charles Ferguson’s documentary about the global financial meltdown of ... 2008? Just two years ago? Wow.

Ferguson puts together all of the pieces familiar to me, then adds a couple I don’t know. He clarifies and reminds.

Oh yeah, there’s Pres. Reagan deregulating the S&Ls overnight in 1982, which Ward B. Coe III and I talked about during our Q&A for Maryland Super Lawyers magazine in 2009. Oh right, Brooksley Born, the head of the Commodity Futures Trading Commission, whose attempts to regulate derivatives during the Clinton years were shot down by Larry Summers , and who became the subject of that “Frontline” special I streamed off of Netflix earlier this year. Oh god, there’s Joe Cassano, the idiot head of A.I.G. F.P., and the bete noir in Michael Lewis’ Vanity Fair piece in July 2009. Oh lord, there’s Alan fucking Greenspan and Henry fucking Paulson and Phil fucking Gramm and Richard fucking Fuld and Larry fucking Summers.

It’s old home week. They got the gang back together again. 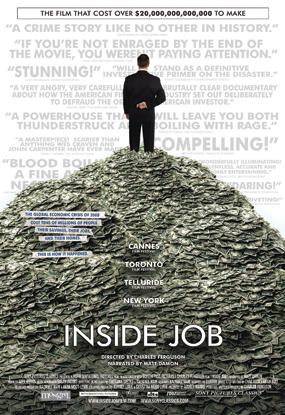 What sticks out in that earlier doc, though, is the he said/he said between Col. Paul Hughes, who worked for the Coalition Provisional Authority (CPA), and who seemed to have a sense of what Iraq was and what we should do there, and Walter B. Slocombe, the Senior Advisor for Security and Defense to the CPA, who arrived for a week in May, got his boots a little dusty, and helped make all the wrong decisions. Hughes seems insistent and exasperated, while Slocombe starts off almost jaunty; then, as he is questioned about, and held accountable for, his actions and policies, his eyes retreat, his voice turns tinny, he reveals himself a hollow man. One wonders what lies he tells himself to make it through the day.

The Walt Slocombe of “Inside Job” is the aptly named Fred Mishkin, an American economist who was one of six members of the Board of Governors for the Federal Reserve from 2006 to 2008. Another talking head, Robert Gnaizda, general counsel for the Greenlining Institute (a non-profit working for the disenfranchised in local communities), was aware of the problems with subprime mortgages, with predatory lending practices, with defaults and foreclosures, and he had semiannual meetings with Ben Bernanke, chairman of the Federal Reserve, to attempt to address these issues. But only in 2009 did Bernanke admit there were problems that needed addressing.

Of course Bernanke didn’t agree to be interviewed. He’s insulated and unaccountable. Ah, but there’s Mishkin, tanned beyond recognition, proudly admitting he was at the semiannual meetings between Gnaizda and Bernanke. He’s expecting softballs. Instead, Ferguson, off camera, states that Bernanke was warned and did nothing. Mishkin’s response? He collapses. He evaporates into nonsense:

One almost feels sorry for him, this little Don Segretti of the Global Financial Meltdown, until later in the doc, when Ferguson gets into the conflicts of interest between economics departments and industry: How industry often pays prominent academics to present viewpoints industry wants. Mishkin did this in 2006. He was paid $125,000 by the Icelandic Chamber of Commerce to coauthor a study of Iceland’s financial system and found it stable “with prudent regulation and supervision.” But “Inside Job” actually begins in Iceland, where we’re informed of the deregulation that occurred in Iceland’s banking industry in 2000, leading to insane loans, and, currently, a debt 10 times its GDP. Mishkin owns up to that. “It turns out that the prudential regulation and supervision was not strong in Iceland,” he says. So Ferguson asks the obvious follow-up: What led you to think that it was? Mishkin’s stuttering response? He seeks refuge in the passive voice and second-person point-of-view. He says all of the following:

Suddenly you’re disgusted all over again. These are charlatans in prominent positions. They are hollow men. Mishkin was paid more than twice as much as I’ve ever made in an entire year to simply co-author a study...and he couldn’t be bothered with independent research. He said what they wanted him to say.

In “All the President’s Men,” Deep Throat notices that Bob Woodward is focusing too much on the ratfucking activities of Donald Segretti, and reminds him of the deeper issue: “They cancelled Democratic campaign rallies. They investigated Democratic private lives. They planted spies, stole documents, and on and on. Now don’t tell me you think this is all the work of little Don Segretti?”

So while it’s fun to watch Mishkin hemming and hawing on camera, it’s less important than: How we got here, what happened, where we are now.

How we got here
Rep. Barney Frank talks up the old borrower-lender dynamic—a dynamic that, even three years ago, I thought was still in place. A person borrowed, a bank lent, and the borrower paid back to the lender; and because it usually required decades to pay back, the lender was careful about who was doing the borrowing. That’s the way the world worked.

The world changed in the 1980s when brokers at Salomon Brothers, a Wall Street investment bank, created complex mortgage derivatives called collateral debt obligations, or CDOs. Per my limited understanding: The mortgages were sold from banks to investment banks, who cut them up, bundled slices with hundreds of slices from other mortgages—to spread and thus minimize the risk—and sold them to investors.

So now when you pay your mortgage, you pay, not the bank, but these investors. Of course, since banks sold the mortgages, banks could be less careful about who they loaned to; and since, with all of that bundling and slicing, risk was minimized, risk could be increased. As it was. Which is how you got subprime mortgages: loans being given to people who had no collateral and couldn’t afford the payments, and who would ultimately default. Their entry into the system drove up prices, and their exit from the system collapsed the prices. The exit almost collapsed the system.

We get some back-and-forth on who foresaw the crisis (Allan Sloan) and who didn’t (Alan Greenspan). We get a little on who began to bet against all of the subprime mortgage loans (Goldman Sachs, chiefly), and who didn’t (A.I.G., chiefly).

One of the most telling incidents, about which you could make a good HBO movie, occurred at the 2005 Jackson Hole Symposium, at which you had the usual suspects: Greenspan, Bernanke, Summers, Geithner, and where an IMF economist, Raghuram Ragan, delivering a paper, less on the nitty-gritty of subprime mortgages and CDOs, than on the larger topic of incentives and risk. Here’s narrator Matt Damon:

Rajan's paper focused on incentive structures that generated huge cash bonuses based on short-term profits, but which imposed no penalties for later losses. Rajan argued that these incentives encouraged bankers to take risks that might eventually destroy their own firms, or even the entire financial system.

The reaction to his paper? Larry Summers attacked. He accused Ragan of being a Luddite. “He wanted to make sure that we didn’t bring a whole new set of regulations to the financial sector at this point,” Ragan says.

“Inside Job” is divided into five parts—“How We Got Here”; “The Bubble”; “The Crisis”; “Accountability”; “Where We Are Now”—and should be required viewing for every man, woman and child in the United States. It won’t be, of course. So far it’s grossed $1.8 million, which works out to about 180,000 people. Out of a nation of 308 million. It's barely being seen.

I could've used more on the history of deregulation (the who and how) and on what reforms have been enacted since Sept. 2008 (if any). I also would’ve liked something on the way the crisis has been spun by the anti-regulation right. It’s doing the shit it always does: blaming the opposition for its own crimes. In this scenario, the crisis was caused by government, not the private sector. In this scenario, government is still the problem and the financial industry can regulate itself—give or take a multi-trillion-dollar bailout from the federal government. I wanted Ferguson to take these guys down. (Though he does have a nice back-and-forth with Glenn Hubbard, Chief Economic Advisor during the Bush Administration, current Dean of the Columbia University Business School, and a nasty piece of work.)

The poster for “Inside Job” shows a suited man crossing his fingers atop a pile of money. This is a key metaphor for me. I don’t know much about business and economics, but, to me, here’s what life feels like in a fairly well-off, post-industrial society.

Most of us struggle to find something we’re good at, and for which we can get paid, and, if we’re lucky, we do this thing for 40 to 50 years until we can hopefully retire with a bit of comfort. And while we’re doing this thing, we’re putting our money, bit by bit, into a room, which is where other people, bit by bit, are putting their money, too. So there’s a huge pile of money in this room. Now there’s another group of people who are attracted to this room for the pile of money. They see the pile of money and say, “That’s what I want to do.” They believe they can take that pile of money, our money, and turn it into a bigger pile of money, which will be mostly their money. But while they’re doing this magic act, they don’t want anyone to watch. Because we can trust them. Because they are self-regulating. Because what could possibly go wrong?