I must’ve tried to go to “Inequality for All” half a dozen times when it was playing at the Harvard Exit last fall, but I kept putting it off. One day I even walked the half-hour walk there but decided at the last minute to get some pho and read a book instead. I just kept thinking, “How much can Robert Reich teach me that I don’t already know? That income disparity is growing? Duh. That since the late 1970s production has gone up even as real wages have stagnated? No duh. That the top tax bracket used to be 91% (during Ike), then 70% (during Kennedy, et al.), then dropped like a rocket during the Reagan years (50%, 35%, 28%), which just happens to be the years when real wages began stagnating? I mean, what else is there to know?”

Plenty, it turns out.

Who makes money from the iPhone? 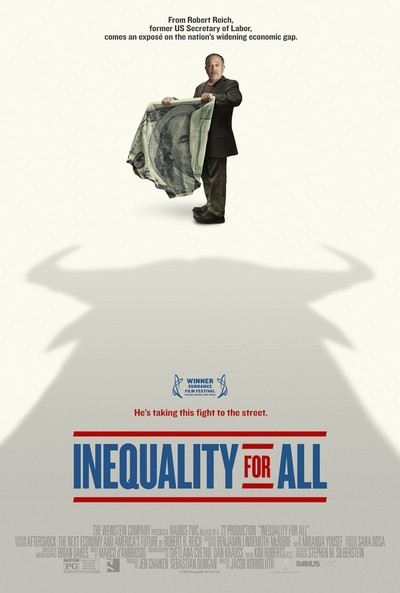 The doc begins and ends with Reich’s Berkeley class on wealth and poverty in the spring of 2012. In a sense, we’re students in that class as well. We just don’t have to pay the tuition ... which used to be nothing at Berkeley, by the way, in the 1960s; then it rose into the hundreds of dollars in the 1970s. Now it’s $15,000 per year. Which is a bargain given other tuition rates.

I mention all that because higher education is part of the problem, according to Reich, and part of the solution. But I’m getting ahead of myself.

Reich, the former Secretary of Labor under Pres. Bill Clinton, begins the class and the doc with three questions:

He begins with basic numbers. Consumer spending is 70% of the American economy. So if the middle class is dying, if most Americans don’t have money to spend, what happens to the economy?

Since real wages began stagnating in the late 1970s, he asks: What happened then? Yes, it was some aspect of tax rates on the wealthy dropping like a rock, and yes it was some aspect of unions dying and losing their voice (thanks in part, or at least not helped by, Ronald Reagan firing all air-traffic controllers in 1981), and yes, we began a technological/digital revolution, and financial markets became more powerful and more deregulated (a vicious cycle), and there was globalization. Then he talks about that word: globalization. What does it mean? He asks for an iPhone. He lists off five or six countries on a PowerPoint slide and asks what percentage of money from an iPhone sale goes to each country. In the students’ guesses, the U.S. came out on top (70%), with China second. In reality? He reveals the numbers:

The company, Apple, is based in the U.S., and the product, the iPhone, is assembled in China; but the advanced components that make up the iPhone are manufactured elsewhere: in Germany and Japan. Why are they manufactured there? Because they have the highly skilled labor force to do it.

Why don’t we? Well, that’s the billion-dollar question, isn’t it?

Reich talks up the virtuous cycle, or his version of it (there are others), which the U.S. demonstrated in the years after World War II. Basically: opening up higher education to more people (through the G.I. Bill, etc.), expands the middle class, which increases consumer spending, which expands the economy, which creates more tax dollars, which allows the government to help subsidize higher education, which etc. etc. Throw a wrench in it and it reverses into a vicious cycle, which shrinks the middle class, shrinks the economy, and increases political polarization. We’ve been in such a cycle my entire adult life.

So how has the middle class survived during this time? Three ways, according to Reich: 1) women entered the workforce, so you had two wage earners, who both 2) work longer hours to make up the difference, and who, when all else fails, 3) go into debt, often by borrowing against or refinancing their home.

On our watch
I don’t want to make “Inequality for All” sound like some dry class lecture. It isn’t. It’s fairly breezy and Reich is a charming host. We get some of his personal history. He has Fairbanks Syndrome, a dashing name for something that has kept him short (< five feet) his entire life. As a kid, being short and thus a target for bullies, he forged alliances with bigger kids. One of them was named Mickey Schwerner. Many of us know what happened to him. That horrible summer helped politicize Reich. He became a summer intern for RFK and eventually a Rhodes Scholar. On the trip to England, he met Bill Clinton.

We also get out and about—first in Reich’s Mini-Cooper, and then visiting various people around the country. We meet Nick Hanauer, a venture capitalist in Seattle, who pays, he says, just 11% in income tax because his capital gains are taxed at a low, low rate. We visit a union meeting at a Calpine geothermal plant, and how the members don’t even agree on whether there should be a union. Some take a right-wing, free-market, kill-or-be-killed approach—even as they’re the ones being killed. There’s talk of profits over workers, and one woman, who recently suffered a cut in pay, says the following about the CEOs who cut worker pay even as they increase their own:

If you have $10 million, or if you have a billion dollars, why do you need that little bit that I have? OK?

Reich calls himself a cock-eyed optimist even as he knows he’s been suggesting the same things for 30 years and things have only gotten worse. At one point he says: “I ask myself whether I’ve been a total failure.” I ask myself the same thing. We all should. Because all of this happened on our watch. This is the world we’re bequeathing to the next generation.

“Inequality for All,” directed by Jacob Kornbluth, doesn’t quite offer solutions although it implies them. You want a virtuous rather than vicious cycle, so tax the wealthy and financial transactions at higher rates to help subsidize education to create a more highly skilled workforce, which can grow the middle class, which can grow the economy, which ... etc.

The other road, the one we’ve been on for 30 years, just gets bumpier.