Did Bernard Malamud ever see this film? He was born in 1914, the movie came out in 1920, so it’s possible. Maybe it made an impression. Maybe it lodged in his unconscious.

I initially assumed that “Headin’ Home“ was made in the flush after Babe Ruth’s 54-homerun season that made him a national sensation, but it was actually made after the 1919 season, when he first set the single-season record with 29 homeruns.That was enough of a big deal to make the film. 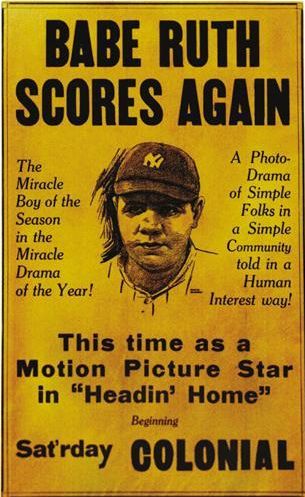 Then he doubled his big deal to 54 homers as the film was released on Sept. 19, 1920. OK, he was actually stuck on 49 that day. The New York Times even talked about a slump the “Mauling Monarch” (a Ruth nickname I’d never heard before) was going through, and opined that Babe’s 50th  “is still in the incubator, and it looks as if it wouldn’t be hatched for a while yet.” Four days to be exact. He hit 50 and 51 on Sept. 24.

In the movie, Ruth plays “Babe,” a misunderstood but well-meaning country bumpkin from the small town of Haverlock. He lives with his mother, or “maw” (Margaret Seddon), his foster-sister Pigtails (Frances Victory, her only film), and their dog Herman. Simon Tobin (James A. Marcus), a banker, owns most everything in town, and he’s got a daughter, Mildred (Ruth Taylor), who’s pretty, and there’s a dog catcher and a local baseball team. The dog catcher is always after Herman and shakes his fist when he doesn’t catch him; the local baseball team is managed by the local barber, who’s Italian, eats garlic, argues with his wife, and doesn’t let Babe play. Instead, he and Simon hire a ringer, Harry Knight (William Sheer, his last film), who turns out to be both a rival for Mildred’s affections and a crook. He’s embezzling money from Tobin’s bank.

In the big game, Babe winds up playing for the visiting town, Highland (shades of the Highlanders, the Yankees’ original name), and in the 9th inning of a 14-14 tie, hits a towering homerun that breaks the window of a church five blocks away. Hero at last! Well, not quite. For this, the town almost lynches him. Then he winds up in New York and becomes a star, so they forgive everything. He marries Mildred after rescuing her from the clutches of Harry Knight, who winds up selling peanuts at Yankee Stadium. Haw haw on him. The End.

Two things are immediately interesting about “Headin’ Home.” The first is the title cards. Written by future Hearst journalist and humor columnist Arthur “Bugs” Baer, they are both archly homespun (dropped g’s, colloquialisms) and filled with sophisticated puns. It’s said, for example, that Ruth “made the Nation of Leagues forget the League of Nations,” while Haverlock is “a little egg and hamlet in the sticks.” Other examples:

More interesting, though, is whether “Headin’ Home” influenced the greatest fictional baseball story of all time, “The Natural,” published in 1952.

The first time we see Babe, he’s chopping down a tree. He spends half the movie whittling this tree into a bat, which he uses in the big game to hit his five-block homerun. He doesn’t call it Wonderboy, but right before he hits it, he looks over at Mildred in the stands. She doesn’t stand but she’s definitely urging him on. She’s the lady in white.

Again, who knows if Malamud even saw this thing (and if you know, let me know), but it’s interesting to contemplate. Maybe boys creating bats out of trees were already part of the early, Bunyanesque mythos of baseball that Malamud simply tapped into.

Ruth was hardly the first baseball player to star in a movie—Ty Cobb and Christy Matthewson had starred in some shorts: “Somewhere in Georgia” (1917) and “Matty’s Decision” (1914), respectively—but he was probably the first baseball player to star in a feature-length movie. “Headin’ Home” is five reels and 73 minutes long. Too long, to be honest. It wanders, it ignores Ruth’s rise in baseball, it makes villains of characters only to make victims of them (Si’s son, chiefly, whom Ruth rescues from a “vamp” in the final reel). It got good notices, even in The New York Times, but today it’s mostly interesting as a historical document. But in that it’s pretty interesting.

You know who’s interesting? Babe Ruth. He’s probably the best actor in the movie. You might even call him a natural.