With a movie like “‘G’-Men,” one of the top-grossing films of 1935, and an early attempt to deglorify gangsters by turning James Cagney, the most glorious of cinematic gangsters, into a lawman, a government man, a ‘G’-man, you hold out hope that something besides Cagney is worthwhile. You know the movie won’t be “Angels with Dirty Faces” but you wouldn’t mind a plot twist that resonates, a shot that illuminates, a forgotten colloquialism that amuses. You want a scene like in “Blonde Crazy,” where Cagney meets a grifter selling charm bracelets. The charm? A swastika. A good-luck symbol that quickly turned into the ultimate bad-luck symbol.

Nothing like that in “G-Men.” Well, there’s that moment when luggage is loaded into the nose of a plane. Didn’t know they did that. There’s a good shot as crime boss Collins (Barton MacLane) makes a getaway via a fire escape that is lit from below: 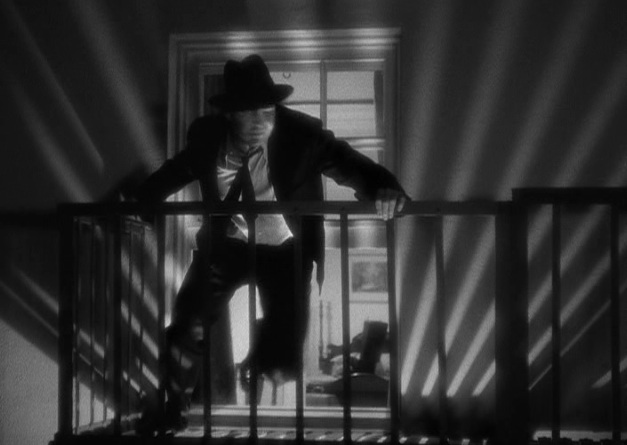 Otherwise it’s a Cagney vehicle with Cagney finally on the right side of the law. His character, ‘Brick’ Davis, is still from the Lower East Side, as Cagney was, and rough-and-tumble, as Cagney was; but he’s saved from a life of crime (and from the Hays Code) by a benevolent bootlegger, ‘Mac’ Mckay (William Harrigan), who sends Davis through college and law school.

As the movie begins, Davis realizes that maybe he’s not cut out to be a sit-behind-a-desk lawyer. A friend, Eddie Buchanan (Regis Toomey), then encourages him to join the nascent Bureau of Investigation, which would be federalized into the FBI before filming was through. When Buchanan dies at the hands of gangsters, that seals the deal. Davis gets the OK from his mentor, who’s getting out of the gangster business anyway to run a lodge in Wisconsin, and joins up.

Does that lodge in Wisconsin sound vaguely familiar? It should.

At the Bureau, Davis runs into two mentors: Hugh Farrell (Lloyd Nolan), an expert at wrestling who is fairly benevolent, and who sees the value and toughness of the new recruit; and Jeff McCord (Robert Armstrong of “King Kong” fame), who starts out bitching about all the lawyers joining the Bureau, and who has it in for the smart-alecky Davis from the get-go. When Davis demonstrates his toughness by giving McCord a black eye in a boxing match, McCord resents it. When Davis demonstrates his value by correctly identifying the gardenia killer as Danny Leggett (Edward Pawley), McCord resents it. It takes him the entire movie to warm up to Davis, by which point he’s willing to welcome him into the family via his sister, Kay McCord (Margaret Lindsay), whom Cagney romances, or at least smooth-talks, throughout. 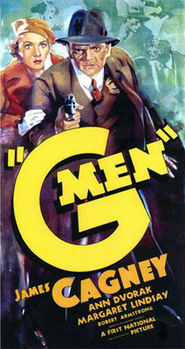 Two of the big shoot-outs in the film are based upon real incidents. When the mob springs Leggett in Kansas City, killing several officers including an unarmed Hugh Farrell, the screenwriter was adapting from the “Kansas City Massacre,” from June 1933, in which Frank “Jelly” Nash was sprung from federal custody while three police officers and an unarmed federal agent lost their lives. Later in the film, the remnants of the Collins gang hole up in ‘Mac’ Mckay’s Wisconsin lodge; and it’s there that they’re surrounded by, and shoot it out with, federal agents, in a scene reminiscent of the 1934 Little Bohemia Lodge shoot-out between federal agents and Baby Face Nelson and John Dillinger. With a twist. In the movie, no agent dies and all gangsters but Collins are caught or killed. In real life, despite having the element of surprise, the federal agents managed to kill several innocent bystanders but captured not one mobster. So it goes.

I only decided to see “‘G’-Men” because it was referenced in Clint Eastwood’s biopic “J. Edgar.” Interestingly, much of what Hoover lobbies for in that film, this film lobbies for: making kidnapping a federal offense; making crossing state lines a federal offense; allowing federal agents to arm themselves. We see the experts at Bureau headquarters use forensic science—examining wood paneling and fingerprints—which is both the image and reality Hoover wanted for his bureau. According to some, Hoover even approved the script and assigned federal agents to monitor production. Even so, according to others, he disliked the final product. He couldn’t get past Davis’ insubordination—as if he were Jeff McCord himself. Once the movie became a hit, though, he used it, along with comic books and radio shows, to help promote the Bureau.

So it’s an ordinary film but consider this:  “‘G’-Men” was one of four movies Seton Miller wrote in 1935; it’s one of five movies William Keighley directed in 1935; and it’s one of six movies in which James Cagney starred in 1935. Warners kept these guys busy. Rewrites and retakes weren’t big.

Keighley and Miller, by the way, would reunite two years later for “The Adventures of Robin Hood,” which almost starred Cagney before the lead went to Errol Flynn. Thankfully. I’m a Cagney fan, but come on.