As this one opens, Deckard is talking to his comatose brother in the hospital about getting vengies for him, and as he’s leaving we see the havoc he wreaked upon entering: bodies everywhere, smoldering wreckage. Question: Did someone try to prevent him from seeing his brother or is this just his way of saying hello?

No, we know. It’s the villainous intro. We’ll soon get two big action set pieces before the big-bang finale. Then we can all go home a little poorer in wallet and spirit.

But first, some soap.

The middle-aged and the restless
I always thought the WWE was like a soap opera for men, and the Fast/Furious franchise is a little like that, too. See if you can spot the soap opera elements below. 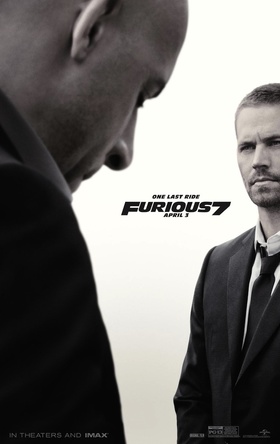 In the early going, our hero, Dom (Vin Diesel), tries to jog the memory of his amnesiac lady love, Letty (Michelle Rodriguez), but she’s resisting, and, at her tombstone (she was declared dead in 2009), she leaves him to tinkly, sappy background music. Meanwhile, our only non-bald hero, Brian (Paul Walker), is having trouble adjusting to life as a suburban dad—so much so that his wife, Mia (Jordana Brewster), Dom’s sister, doesn’t tell him that she’s pregnant with his second child. She saves that for the final reel to give him the courage to go on. Because apparently she and the first kid aren’t enough.

So it’s almost a relief when their house is blown up by Deckard. Is that the key to these movies? Make the downtime so excruciating that we crave the action sequences? We’re like Brian in this regard. We need to get away from the domesticity and its greeting-card sentimentality. (Ex., Dom to Brian: “What’s real is family. Your family. Hold onto that, bra.”)

Deckard also kills old friend, and F&F regular, Han (Sung Kang), then shows up at Han’s funeral and is chased through the L.A. streets by Dom. There’s a car confrontation (vroom, vroom), and a head-on collision. Deckard is about to shoot Dom when U.S. Special Forces, led by Mr. Nobody (Kurt Russell, enjoying himself), save Dom but let Deckard escape. Because everyone lets Deckard escape.

That’s how Dom, the bald, undershirt-wearing outlaw with the Groot voice, winds up working for the feds. Sadly, our government, which can normally track a fart on the other side of the universe, has no way of tracking a guy who is forever leaving smoldering wreckage in his wake. But a plan is hatched. A hacker known only as “Ramsey” (question mark in the middle of a blank face) has created a computer program called God’s Eye that can hack into ... well, anything: smartphone, surveillance camera, you name it. It basically uses face-recognition software while turning every smartphone in the world into surveillance cameras. The feds figure this would be a good way to track Deckard. (And us? Not raised. No Edward Snowdens here.) The bigger problem is that Ramsey has been kidnapped by a terrorist named Jakande (Djimon Hounsou, to add to the bald) and no one knows where God’s Eye is. So the F&F team, including Letty, have to get through Jakande to get to Ramsey to track Deckard.

Except they really don’t. Because no matter where they go, Deckard follows. It’s kind of funny, actually. They go through hell—parachuting muscle cars out of transport planes to land in a remote region of Azerbaijan; launching hot rods from one skyscraper through another in Abu Dhabi—so they can get the hacker to get the hacking device to get Deckard. Except he’s always right there. Just shoot him for shit’s sake.

Ramsey, in a shocker, turns out to be a hot-looking chick (Nathalie Emmanuel of “Game of Thrones,”), and joins Angelina Jolie, Hugh Jackman and Chris Hemsworth as your average Hollywood hackers. At one point, Dom and Ramsey are surrounded by bad men on one side and a cliff on the other. His solution? Drive off the cliff. It works. The car breaks apart but they don’t.

That’s the ultimate lesson of this movie: the flesh is willing but the metal is weak. Or mathematically: musclemen > musclecars.

The bald and the beautiful
But don’t take my word for it. The characters themselves point out the absurdity of the movie. Tej and Roman (Ludracris and Tyrese Gibson) check out a bikini-clad Ramsey emerging in slow-mo from the Persian Gulf and say, “She don’t look like no hacker.” In the kitchen-sink finale in the streets of L.A., while Dom and Deckard square off on a rooftop parking garage and Jakande shoots missiles from a military helicopter, Brian and Roman perform a parallel 360 stunt to transfer Ramsey from one car to the other. Tej’s response: “She made it! Can’t believe we pulled that off!”

My favorite absurd moment may be when the hospitalized Hobbs (Dwayne “The Rock” Johnson), realizing L.A.’s a war zone, stands and rips the cast off his massively pumped left arm, then tells his sassy daughter, “Daddy’s gotta go to work.” Or maybe it’s when Dom guns his muscle car through the air, barely missing Jakande’s helicopter, but manages to hang a bag of explosives off the end of it, which Hobbs—after driving an ambulance through a bridge barrier to stop a missile in flight—shoots to blow the helicopter up.

Sadly, Jakande killed, Deckard captured when a parking garage falls on him (yes), we’re back to the soap. Dom, who survived the drive off the cliff and through the Etihad Towers with hardly a scratch, is at death’s door after the parabola run at Jakande’s helicopter. Brian pounds on his chest, makes demands (“You breathe!”), until Letty takes over. She cradles Dom’s head, cries, tells him if he dies, she dies. She also tells him her memory is back. “I remember it all,” she says. To which, not nearly at death’s door (can no one on the Furious team take a pulse?), he opens his eyes and croaks in his Groot voice, “About time.” And everyone smiles with tears of relief in their eyes. Or something.

The tagline for “Furious 7” is “One Last Ride.” Promises.