The audience broke into rapturous applause at the end of György Pįlfi’s “Final Cut: Ladies and Gentlemen” (“Final Cut: Hölgyeim és uraim”) at SIFF Uptown in Seattle the other night.

My reaction in the back row: “Really?”

The movie’s a cute idea. Create a movie out of the history of boy-meets-girl cinema. Give movie lovers the ultimate movie.

So what’s the story Pįlfi comes up with? 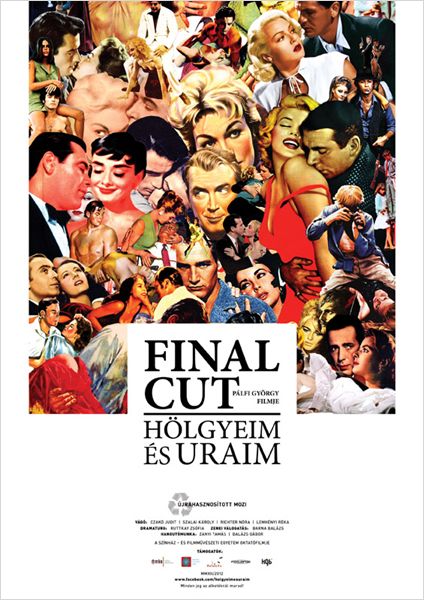 He gets out of bed as Ronald Coleman, showers as Michael Douglas, looks in the mirror as Jack Nicholson, shaves as Humphrey Bogart. Putting on his clothes he’s Charlie Chaplin. He looks in the mirror and points at himself as Jon Voight. Then he’s out on the street, strutting, as John Travolta ... and Choi Min-sik ... and William Holden. Then he bumps into the girl (Audrey Tautou, et al.) and is transfixed like ... Well, I lost track of them all. But you get the idea.

So it’s a cute idea. It required a lot of editing. Three years of editing, according to the trailer. The trailer also tells us these organizations (or maybe somebody at the festivals themselves?) felt this way:

I went out of curiosity, hoping to see something more than a YouTube montage. It is ... but not by much.

Maybe I was hoping for a better story? But this is the story:

The guy wakes up and goes outside and sees the girl. He follows her to a music hall, where she’s putting on a show. He goes backstage and asks her out. They go the movies. The next day it’s her turn to wake up ... as Snow White, Scarlett O’Hara, Eliza Doolittle. (The women waking up is so much better—not to mention more iconic.) The man’s waiting, reading a newspaper, smoking. Then they’re out dancing. Then they kiss. Then—boom!—sex. A lot of sex scenes, actually, some pretty racy. We get orgasm, and post-coital conversation, and talk of marriage. But then somebody bursts in! The rival! It’s a showdown. The old west. It’s knives, swords, lightsabers, fisticuffs. The hero is bloody and wounded! But wins! And proposes! And the girl says yes. She says yes like Molly Bloom says yes, over and over. I like that bit, actually. All of those yeses, one after the other. But this should be the end of the movie, right—the wedding—yet we’re only a third of the way through. What’s left?

What’s left is life. We get the everyday. The commute as Jack Lemmon. The time in the office as Ethan Hawke. A Chinese colleague plants a seed. He says he saw the man’s wife stepping out with another guy. The man dismisses it. At home she’s doing the housework as Paulette Godard. She answers the phone as Julie Roberts. Is it her lover? No, her doctor. She’s pregnant! She wants to share the news with the man. But, alas, he’s too busy. Or suspicious? “Don’t call me at work,” he says, and they drift apart on mutual misconception. One day he follows her and peeps in on her taking off her clothes. Oh, the pain! Except, no, she’s at the doctor’s. But he doesn’t know this. So he confronts her, slaps her, calls her whore. She runs to a friend’s. He mopes, sees a notice about war, signs up, goes off, and dies. Yes, dies.

So is that it? That’s the story?

No. Superman turns back time. I’m not kidding. And the man is able to go back to a moment where he communicates with the woman. And they reunite. And live happily ever after.

The big joke at the end? He’s now the undead, Gary Oldman of Bram Stoker’s Dracula, and takes a bite out of Winona Ryder.

And that’s the end. Rapturous applause.

I’d given up on it long before. “Final Cut,” rather than an homage to cinema, flattens cinema for me. It reminds us how similar it all is. Boy meets girl, boy loses girl, boy dies and becomes Dracula thanks to Superman.

I think my favorite moment was early in the courtship. She spreads her legs as Sharon Stone, he smiles as Norman Bates, then we see Maria’s face from “Metropolis” wink creepily. That made me laugh out loud. The only other times I laughed had more to do with Chaplin than Pįlfi.

Over 450 films. Over three years of editing. And it still feels like something I’d appreciate but wouldn’t quite finish on YouTube.