As you age, you begin to question the legend.

Legend has it that in the early 1960s, beginning with the utterly original Fantastic Four, Stan Lee and Jack Kirby rescued the superhero genre from the cheesy, soporific clutches of DC Comics and made it anew. They gave it continuity: what happened last issue mattered this issue. The characters became human and relatable: they fought; they moped; eventually they separated and divorced. Superheroes had always been wish fulfillment but it was Stan Lee’s particular genius to wed the fantasy (this guy is superstrong and can climb walls...) with identification (...even though he’s a mopey teenager like me!).

That’s the legend and it’s more or less true. What you begin to question is the utter originality of the Fantastic Four. As conceptions go, its wasn’t so immaculate.

Plastic Man, Invisible Man, Human Torch and ROMMBU!
I’m not talking about how DC’s Jack Liebowitz supposedly bragged about the sales of its Justice League of America comic books to Marvel publisher Martin Goodman, who then demanded, of his editor-in-chief Stan Lee, a team of superheroes. I’m talking about the superpowers. Each is derivative of an earlier character. 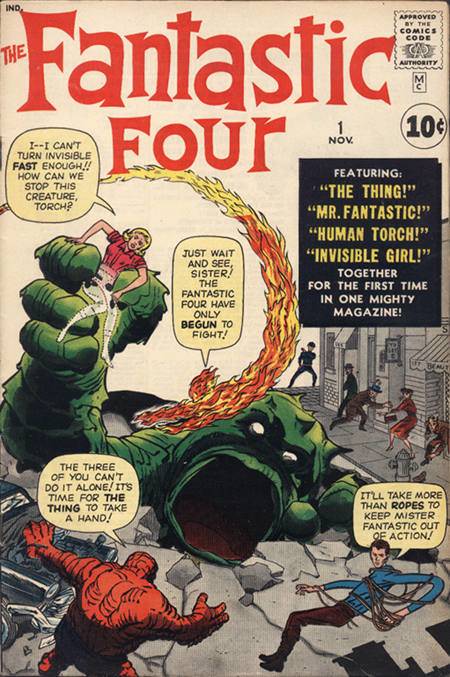 Mr. Fantastic can stretch like Plastic Man (created 1941), the Invisible Girl can turn invisible like the Invisible Man (created 1897), and the Thing is a rock creature like so many of the odd-named rock creations that kept Marvel afloat in their near superhero-less 1950s (Moomba and Krogarr and Rommbu and the like). The Human Torch, meanwhile, borrows both name and powers from the WWII-era creation of Carl Burgos. None of it is very original.

The Fantastic Four’s origin story, meanwhile, is inevitably trapped within the absurdities of its time. In Fantastic Four #1, published in November 1961, Ben Grimm is a test pilot (with a temper) and Reed Richards is a scientist (with a pipe), and they have to travel into outer space fast or else, in the words of Sue Storm, “the commies ... beat us to it!” Why does she tag along? Because she’s Reed’s fiancée, of course. Why does her younger brother, Johnny, tag along into outer space with the three of them? Because he’s the younger brother of the fiancée of the guy who, like, designed the whole rocket ship. Duh! And so all four sneak into the rocket ship at night and launch it, we’re told, “before the guard can stop them.” That’s guard, singular.

Despite the legend, in other words, some of it is pretty hokey stuff.  So it’s not wholly the fault of director Tim Story (“Barbershop”; “Taxi”), and screenwriters Mark Frost (“Twin Peaks”) and Michael France (“Hulk”), that their 2005 movie, “Fantastic Four,” sucks.

R-E-S-P-E-C ... Aw, screw it
Story and company make attempts, feints, at updating and modernizing the story in a positive way. Reed Richards (Ioan Gruffudd) is now a brainiac scientist (without a pipe) who has gone broke, and who, with his pal Ben Grimm (Michael Chiklis), proposes to business tycoon and egomaniac Victor Von Doom (Julian McMahon), late of Latveria, that a cosmic storm may have been responsible for the evolutionary jump in humankind; and another cosmic storm, like the first one, is fast approaching and needs to be studied in space. Doom agrees, but demands a 75-25 split on any profits resulting from their scientific studies, then demands that his current girlfriend, and Richards’ old one, Sue Storm (Jessica Alba), along with her hotshot younger brother, Johnny (Chris Evans), who used to be Ben Grimm’s underling, come along for the ride. And that’s how they all wind up in space together—with Doom this time—to encounter those cosmic rays. 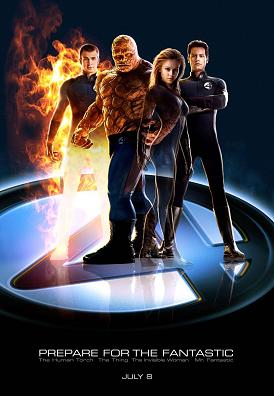 Except ... aren’t the filmmakers cadging the evolutionary bit from the “X-Men” movies? And does it even make sense considering the results? The next step in evolution is... becoming super stretchy? Or invisible? Or a rock man?

There’s an attempt to explain this, too—to wed the power to the personality—but it’s pretty weak connective tissue. Johnny’s a hotshot, so... Sue feels invisible to Reed, so...  Dr. Doom tells Reed at the beginning that he’s “always stretching, always reaching for the stars,” so...

But the casting’s not bad, right? In theory? Gruffudd is properly dull and brainy and Chiklis is properly gruff and working class and Evans is cocky and flip and gives us some good line readings. And Jessica Alba... She takes off her clothes a lot. Right?

Alright, screw it, the thing’s just dumb, monumentally dumb. The filmmakers give us a feint at “X-Men”-like respectability but then double-down on dumb. The movie felt lost to me forever when Doom introduced Richards and Grimm to “My director of genetic research...,” and we get a shot of the 23-year-old Jessica Alba sauntering sexily toward the camera. No wonder his company goes under.

Doubling down on dumb
Here. Another example. Let’s say you’re a sexy nurse (Maria Menounos). Let’s say you’re such a sexy nurse that you’re only known as “Sexy Nurse” in the closing credits. And let’s say you have a patient, Johnny Storm, recently returned from outer space, and you’re involved in the fairly simple task of taking his temperature. He flirts a bit, then declares he’s going snowboarding even as you’re read his temperature: 208 degrees! WTF? So what do you do?

Then on the downhill run, right before your eyes, he bursts into flame, begins to fly a bit, then crashes into a snowbank where the heat from his body creates its own little snowbunny hot tub, which is where he stands, half naked, and invites you in. What do you do?

The whole movie is like this. The big early set piece, the introduction of the FF to New York and the world, occurs on the Brooklyn Bridge. Ben Grimm is brooding there because his fiancée, Debbie (Laurie Holden), whom we’ve never met before, races outside in a short nightie to greet him, but runs, stumbles away when she sees the orange, rock man he’s become. Poor Ben! So he’s feeling sorry for himself when a jumper shows up and contemplates the East River. Ben turns to him and growls, “You think you got problems, pal?” (Good line.) The jumper stumbles back in panic, but into traffic, and Ben has to save him, which causes a massive, dozen-car pile-up in the middle of the bridge, which causes a firetruck to crash through the bridge’s barrier and teeter (like the schoolbus in “Superman: The Movie”) over the edge. It takes all of the powers of the Fantastic Four to save the firemen. The reaction to this is two-fold. The NYPD draw guns on the four, particularly on the giant orange rock man; but the NYFD, now saved, burst into applause, and they’re joined by the populace on the walkways, who aren’t freaked by the orange rock-man, or the super-stretchy guy, or the hot invisible girl. Why would they be? They know heroes when they see them. Even if the Thing did create the disaster in the first place.

Then it gets worse.

At this moment, with the four basking in the applause, Debbie suddenly shows up in the middle of the bridge. Was she drawn by the network coverage? Did she just happen to be there anyway? Is she going to ask for forgiveness? Of course not. She’s not supposed to be with him. He’s supposed to be with Alicia Masters (Kerry Washington), who’s blind, see, and so doesn’t mind that he’s an orange rock man. She goes beyond sight, and touch, and senses the good man within the hideous monster. Debbie, that bitch, doesn’t (hence the short nightie on the city streets). So on the bridge, as her fiancé is being applauded by all of New York, she removes her engagement ring and drops it on the pavement and walks away. Poor Ben! He then tries to pick it up but can’t with his giant rock fingers. Poor Ben! He’s trapped in a world he never made!

Schtupping Sue Storm
I could go on. The high, reedy voice Doom has even when he dons his mask. The fact that they make Reed Richards quiet and dull rather than talkative and dull. The idiotic dialogue:

Johnny: Sue stop, you're not mum. Don't talk to me like I'm a little boy, okay?
Sue: Maybe I would if you stopped acting like one. Do you even hear yourself? Who do you think you are?
Johnny: Why is everyone on my ass? If you guys are jealous, that's fine; I didn't expect it to come from you, though.
Sue: You really think those people out there care about you? You're just a fad to them, Johnny!

But the dumbest part of the movie has to be the love triangle between Reed, Sue and Victor.

Reed and Sue were a couple in college but apparently he didn’t pay enough attention to her—he thought too much and didn’t act enough—so she left him. And now she’s Director of Genetic Research for Doom, Inc., or whatever it’s called, while dating its CEO, Dr. Doom. All of this is treated semi-comically. It’s used to get Reed Richards’ goat. Hah! Dude, you totally lost the sexy girl cause you think too much! You shoulda nailed that shit. Like daily. Like hourly. Totally.

Seriously, comic-book geeks have to stop with this love-triangle shit between hero, villain and girl if they want the girl to remain sympathetic at all. The only reason Sue Storm remains sympathetic here is because in her moments alone with Doom she obviously doesn’t care for Doom. So why is she with him? Is she playing him? Does she know her own heart? If Reed Richards hadn’t come along with his cosmic-ray proposal, would she have married Doom, this rich man, and become vice president of the company?

Between Debbie, Sue Storm, and Sexy Nurse, women don’t come off well in “Fantastic Four,” do they?

Straw Man vs. Superman
Even if you don’t know the FF, even if you don’t know Ben Grimm from Rommbu, it’s obvious Sue and Reed will get together in this movie. It’s obvious Doom is creepy and vain and fixated on Reed Richards in an unhealthy way. So the love triangle, such as it is, is basically a straw-man subplot: created for the illusion of drama; created only to be torn down. We know where everything is going and it winds up there without anything interesting happening along the way. I suppose that’s where acting comes in. I suppose that’s where good dialogue and plotting and pacing comes in. “FF” gives us none of these.

Let’s look at something that works. Let’s look at, say, “Superman: The Movie.” We know that Superman will save Lois Lane so the question is how he saves Lois Lane. Wait, he doesn’t? She dies? She’s buried alive in her car? Oh, then he reverses the earth’s rotation to bring her back to life? That’s kind of lame.

So why does it work?

What does it feel like to burst into flame? To stretch? To turn invisible? We get none of that in “Fantastic Four.” What’s it like to be in love? To lose your love? Sorry, can’t stop now. We’re in too much of a hurry to get to the next uninteresting moment on our fixed path to the inevitable end.

What a revoltin’ development.